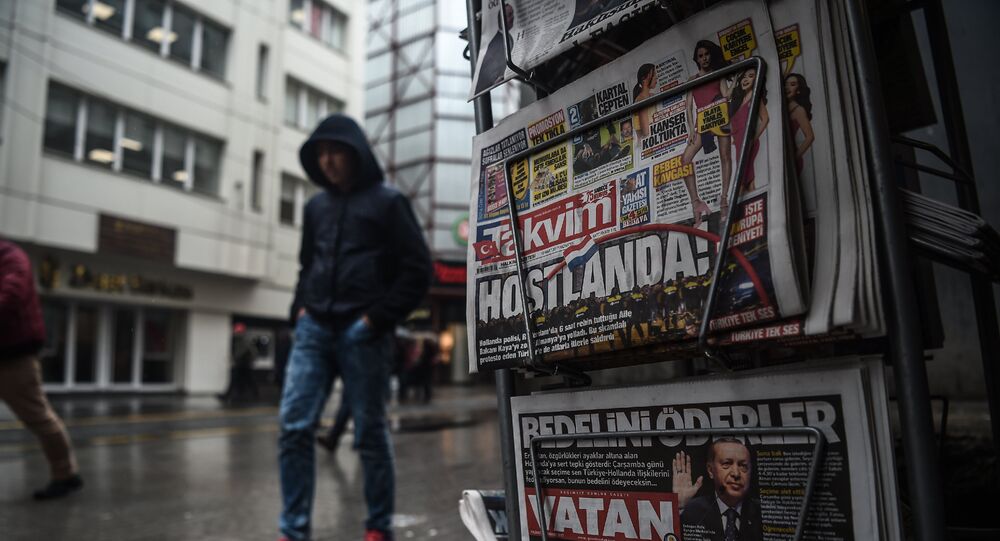 Turkish Authorities 'Should Stop Calling Those Against Referendum Terrorists'

Commenting on the recent report of the Venice Commission on the upcoming Turkish referendum on constitutional changes, Turkish legal expert İbrahim Kaboglu explained to Sputnik Turkiye why the Turkish authorities should not underestimate the document.

© REUTERS / Murad Sezer
Tensions Between EU, Turkey Chance for Ankara to 'Escape From EU Embrace'
The Venice Commission, an advisory body of the Council of Europe on constitutional law, recently issued a report regarding Turkey's upcoming constitutional referendum on switching to a presidential system of governance.

The report said that "by removing necessary checks and balances, the amendments would not follow the model of a democratic presidential system based on the separation of powers, and instead would risk degeneration into an authoritarian presidential system."

It also criticized the proposals for "letting the new president exercise executive power alone, with unsupervised authority to appoint and dismiss ministers, and to appoint and dismiss all high officials on the basis of criteria determined by him or her alone, allowing the president to be a member and even the leader of his or her political party, that would give him or her undue influence over the legislature and giving the president the power to dissolve parliament on any grounds whatsoever, which is fundamentally alien to democratic presidential systems."

The Venice Commission also said the proposed changes would "further weaken the already inadequate system of judicial oversight of the executive and the independence of the judiciary."

Turkish Justice Minister Bekir Bozdag slammed the report, saying that the only purpose of the document was to "encourage people to say 'no' in the referendum."

"6)Venice Commission's Opinion shows that Commission sided with the "NO" voters in the constitutional amendments referendum." @bybekirbozdag

​He added that if the Venice Commission wanted to advise Turkey and provide a positive contribution to the charter plans, it should have done so while these changes were being discussed in parliament.

"The Venice Commission's opinion on the amendments to the Constitution of TR (Turkish Referendum) is not technical but completely political," tweeted the Judiciary of Turkey.

"1)The Venice Commission's opinion on the amendments to the Constitution of TR is not technical but completely political." @bybekirbozdag

​Commenting on the recently issued document, Turkish expert in constitutional law İbrahim Kaboglu told Sputnik Turkiye that the authorities in Turkey should not underestimate the document as it "contains a number of very important remarks."

"The referendum should be looked at from the two points of view," he told Sputnik.

© AP Photo / Burhan Ozbilici
Both Turkey's Referendum on EU Accession Talks, Membership in Bloc Unlikely – Lawmaker
The Venice Commission, he said, is an important advisory body of the Council of Europe. Hence the point of view voiced by the commission is the official position of the Council of Europe. The value of a document prepared by this body is often proven true as the European Court often takes it into consideration when making a decision, hence it should not be underestimated, he said.

"If we look at the developments which have been going on in Turkey since October 16, when the constitutional amendments were put to parliament, it will become clear that the conclusions of the commission's report echo the point of view of a number of Turkish political analysts on the situation in the country, which the Turkish authorities prefer to dismiss and even deny its existence," he told Sputnik.

"Apart from the state of emergency, which is still in effect in the country, the Turkish authorities undertake actions which go beyond it and violate the provisions of the constitution," the expert added.

The illegality of these actions has been admitted by the country's prime minister, he said.

Ahead of the referendum, Turkish political leaders are spreading such persistent propaganda, aimed at persuading the population to vote for the constitutional amendments, that it has led to a serious crisis in relations between Turkey and Europe, he said. The Venice commission's report should not be regarded independently of the ongoing developments.

© REUTERS / Darren Whiteside
Turkey May Hold Referendum for Presidential Form of Government
İbrahim Kaboglu also noted that about two months ago the country's prime minister promised that there will be no vote on the amendments to the constitution if the state of emergency is still in effect.  A number of experts then said that under the state of emergency there should not only be no referendum on the issue, but there should not even be any debate on the amendments. However everything now signals that the referendum, the results of which can drastically alter the future of Turkey, will be in fact be held under the state of emergency.

The expert also added that the Turkish authorities should pursue a more balanced policy without using aggressive rhetoric towards those who are arguing against the amendments.

"However, unfortunately, we are now witnessing the spread of rhetoric which equates those coming out against the amendments with terrorists. It is an unacceptable and very dangerous approach," he concluded.