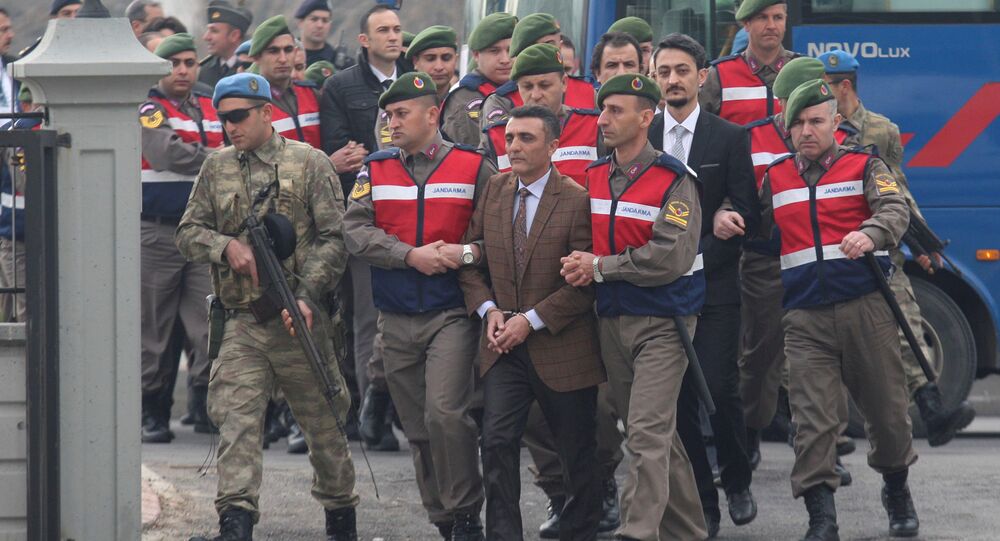 Trial of 44 Suspects in Erdogan Assassination Attempt Begins in Turkey

A total of 47 supporters of Islamic preacher Fethullah Gulen, living in exile in the United States, are charged with attempting to assassinate Turkish President Recep Tayyip Erdogan during the July 15 failed military coup, according to local media reports.

© AP Photo / Hussein Malla
Right to Fair Trial Must be Respected in Turkey After Coup Attempt
MOSCOW (Sputnik) — A trial of a group of 44 participants, charged with attempting to assassinate Turkish President Recep Tayyip Erdogan during the July 15 failed military coup, has started in the Turkish city of Mugla, local media reported Monday.

During the attempted coup, rebels attacked a hotel in the country's southwestern resort of Marmaris where Erdogan stayed. Erdogan managed to leave the place minutes before the arrival of the attackers.

According to the Anadolu news agency, a total of 47 supporters of Islamic preacher Fethullah Gulen, living in exile in the United States, are charged in this case. Three, including Gulen, are on the wanted list in Turkey.

The first hearing is ongoing in the conference hall of the Chamber of Commerce of Mugla, the case is being reviewed by a judicial panel for grave offences.

© Sputnik / Jurij Sorokin
Trial of Suspected Murderer of Russian Su-24 Pilot Begins in Turkey
The prosecutor has demanded to sentence each of the accused for at least six consecutive life sentences each under the Turkish penal code for attempting to kill the President, attempting to overthrow the constitutional order, crimes against the legislative body and the government, leading an armed terrorist organization, and intentional killing of an official.

The failed coup attempt on July 15, 2016, left 248 killed and thousands of people wounded. The members of the Fethullah Terrorist Organization (FETO) are believed to be the organizers of the putsch and are being prosecuted by the Turkish authorities.

Following the coup attempt, the authorities arrested more than 41,000 people and fired or suspended over 100,000 believed to have links with FETO. Many of them are teachers, public servants and journalists.