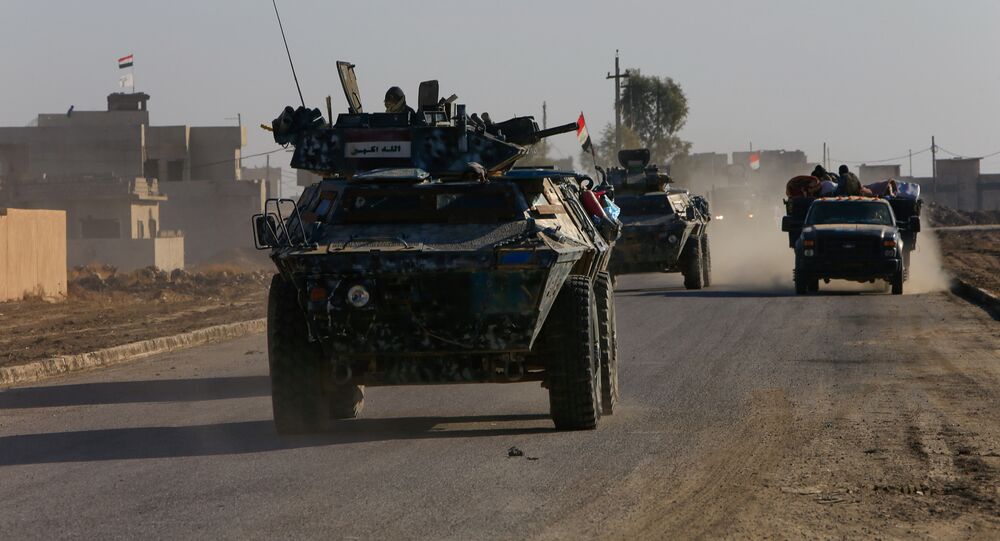 The Iraqi military, assisted by Kurdish fighters and the People's Mobilization Forces are expected to drive Daesh out of eastern Mosul within a week, Mahmud as-Surdji, a volunteer fighting to free the second largest city in the country, told Sputnik.

"Terrorists have offered no major resistance thanks to an unexpected offensive led by the Iraqi Army as part of the second phase of the operation to free Mosul," he said. "Due also to the fact that [Baghdad-led forces] have opened new fronts the Iraqi Army has successfully advanced to the city center."

The Iraqi military and its allies launched the second phase of the operation to free Mosul on December 29.

"The Iraqi Army is expected to secure a major victory in eastern Mosul" within days, he said. "It is thought that eastern Mosul will be declared free of terrorists within a week."

Mahmud as-Surdji also mentioned that US special operations forces were not taking part in the operation. They have offered advice and provided intelligence data to the Iraqi Army, he added.

© REUTERS / Khalid al Mousily
US Admits Civilians May be Dead After Targeting Daesh Near Mosul Hospital
Baghdad launched Operation "We Are Coming, Nineveh" on October 16, with more than 120 towns and settlement liberated from Daesh in two weeks. On November 1, counterterrorism forces entered the city, encountering fierce resistance from the militants. A quarter of the city is said to have been freed so far, but the campaign stalled for weeks due to slow progress.

On Thursday, Iraqi-led forces redeployed thousands of soldiers to the district of Intisar. They are also fighting to retake the neighborhoods of al-Quds, al-Karama, al-Wahda, Somer and al-Salam hospital. The 9th Division of the Iraqi Army and federal law enforcement forces are said to be fighting in al-Salam and al-Shimaa. The government forces are said to have freed the al-Sada district.

US Troops to Deploy Near Mosul Frontline, Trying to Revive Stalled Offensive