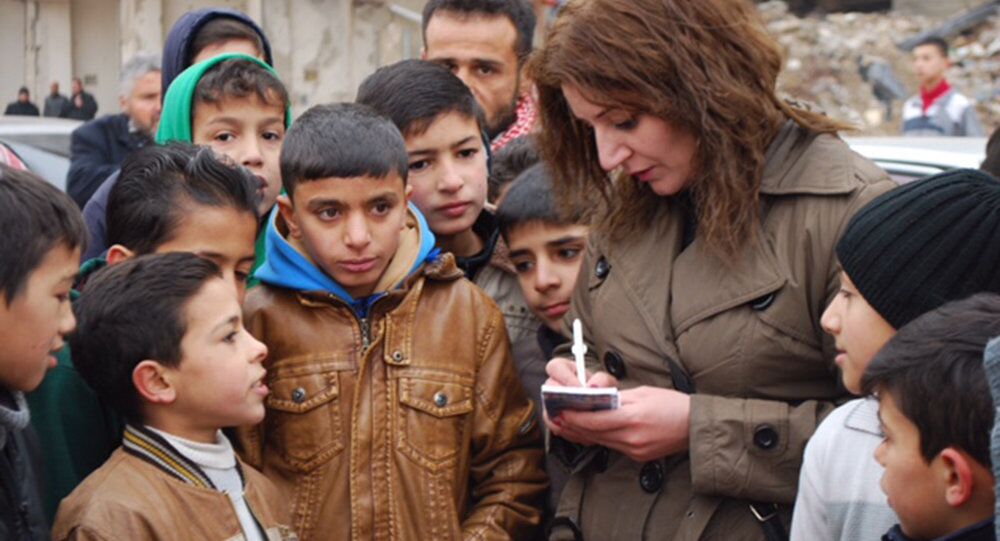 On Friday, Syrian and Russian officials confirmed that the city of Aleppo had been completely liberated, the Syrian army completing its operation to retake the city's eastern districts. Continuing its coverage from on the ground in the war-torn city, Sputnik spoke to some of the most vulnerable victims of the Syrian war – the children of Aleppo.

In the past few days, the weather in Aleppo has been cold but sunny, temperatures hitting highs of 12° Celsius and lows of 7° over the weekend. In the daytime, the temperature in the city's ruined buildings is lower than in its streets. Schools have yet to be rebuilt, and the streets are filled with children. The arrival of a news correspondent generates interest, and the children enthusiastically answered questions from a Sputnik Arabic correspondent.

Fatima, a resident of the al-Shiar district, formerly controlled by militants, told Sputnik that more than anything, she wished "for the suffering to end." Before the city was engulfed in battle, Fatima attended school with her friends, and dreamt of the future. But with the arrival of the terrorists, her dreams collapsed, her school turned into a pile of rubble.

Fatima, her family, and the entire district faced a shortage of food and medicine throughout the years of occupation. Any actions to resist the occupying militants were punished mercilessly, she said.

Sputnik met Mahmud, a frail boy with hungry eyes, in another part of the city.

Together with his younger brothers, the boy is looking for any part time work he can find to contribute to the household budget. His father lost his job, a loaf of bread costs 800 Syrian pounds (about $4 US), and a small cylinder of gas 25,000 pounds (about $110).

Many of the city's children have been put to work in dangerous occupations – in quarries, bakeries, and the shoe industry, to try to support their families, putting their health at risk and becoming vulnerable to exploitation. But they have had little choice; Aleppo's children have grown up fast.

Another boy, Abd, said that he was five years old when his father was killed in front of him.

Abd told Sputnik: "I want to grow up and become strong. I will arrest all the terrorists who are killing people for no reason. They killed my father because he refused to fight against the Syrian army."

Fuad, 10 years old, told Sputnik's correspondent that he has seen things impossible to imagine in a horror movie.

© AP Photo
Sputnik Exclusive: Aleppo's Refugees Return ‘Despite Efforts of Coalition’ (VIDEO)
During the occupation, militants forbade him and his classmates from going to the local school, which they turned into their headquarters. They told Fuad and friends that their studies were pointless and that they would be better off joining the militants to free Syria. Fuad snickered at the word 'free' because the fighters did not allow people to leave their homes, where they slowly died from hunger.

Yushia is 11. A bomb killed his father, and the family's home was destroyed. He lives together with his mother and several other families in one of the ruined houses in his district, and roams the streets with his pet cat.

Asked about his wishes for the new year, Yushia replied: "I want for the war to end and for life to calm down. My dream is to return to my old home, to sleep in a warm bed, not to quarrel with the other boys, and not to be ashamed of our current housing."

Aisha, 12, lives in the same house as Yushia, but is not ashamed of her temporary home, saying she has found new friends there. Instead, she is shy of her old, shabby clothes and shoes.

"My mother made a jacket out of a blanket which we received from the Red Crescent; I feel ashamed to wear it in front of my friends," she said. "I dream of a bright, colorful dress and beautiful shoes," she added.

Yasmin, 12, told Sputnik's correspondent: "Since childhood, I've dreamed of finishing school and becoming a doctor or an engineer. I understand that this dream is impossible today, but will work hard to find a path to happiness."

Finally, Basma, 13, lives with her mother and brothers. Her father died during the war.

She says it's difficult for her mother to support the family, which has been impoverished by the loss of her father, who was the breadwinner. "I just hope there will be no snow, so that we do not freeze, and that my mother cries less," Basma said.

The four-and-a-half year struggle for Aleppo has hit the city's children harder than any other demographic group. Their experiences will undoubtedly be engraved on them for the rest of their lives. Still, Sputnik Arabic's correspondent says, they smile when they say that the terrorists have gone, but they are still here.

Total of 47 Children Trapped in Orphanage Evacuated From East Aleppo