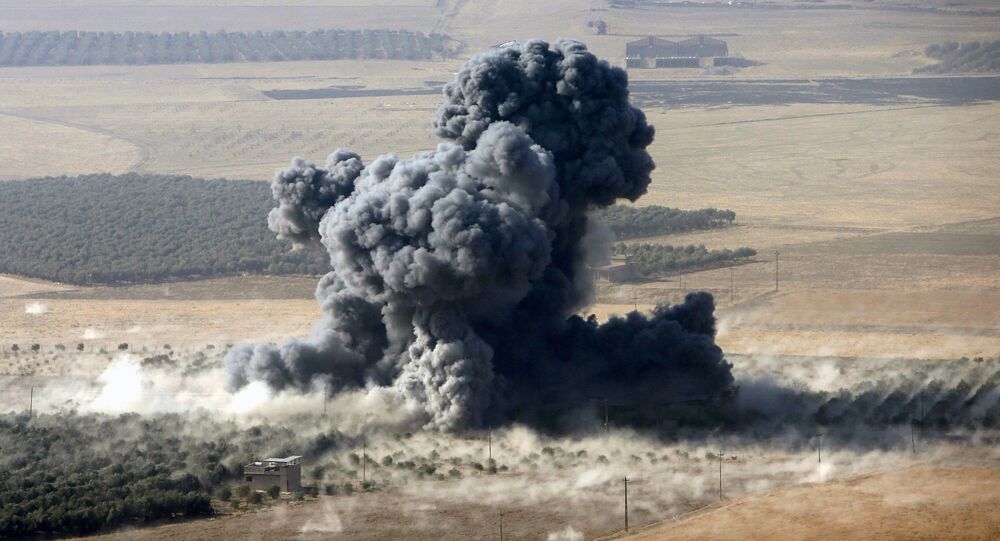 Like many consequential events in history, the emergence of Daesh (also known as ISIL/ISIS) didn't just sneak up on the policymakers of the US administration, according to two British academics. In their book, The Origins of ISIS, they claim that politicians just got it very badly wrong.

The basis of the recently published book, The Origins of ISIS, by authors Simon Mabon, a lecturer at Lancaster University in the UK and Middle Eastern security analyst Stephen Royle, puts to question the claims that experts were unable to foresee what was beginning to unfold in the city of Mosul back in 2014.

"ISIS had announced exactly what they were going to do, and then went ahead and did exactly that. These guys were getting referred to as some kind of alien army taking over in Iraq, but from our experience of accounting stories from the ground, we found that it was a lot more than that," Royle told a conference held at Kings College on 23 November.

​"The stories that we have accounted are important in understanding what is happening in the Middle East and we specifically wanted to research the characters on the ground, who predominantly happened to be from the Sunni Arab communities.

Simon Mabon explained how marginalization merged with a combination of many other factors, enabling Daesh to rise in power and in numbers:

"If you are not taking care of people then they will turn to those who present a solution or any option that will provide them with their basic needs. We saw how the disenfranchized became so with the sudden collapse of the state causing the low to no job prospects, increased mistrust of government and the entire political system itself. Protest movements began emerging because people were disgruntled and fed up and it became convenient for communities to become part of this new movement called ISIS."

The fragmentation of Iraq left no social infrastructure and in effect dissolved society, according to both academics. Their book reveals what they witnessed during the uprising that spread across many parts of the Middle East and North Africa.

Ahead of the publication of #TheOriginsOfISIS very soon (in the next week or so!), here's the introduction https://t.co/EueUtfxvKa

​The authors were asked by an attendee at the London conference on what they felt made Daesh so appealing to such large numbers, especially considering that there were many tribal factions all fighting for the same level of power and influence.

"They provided a structure and some level of certainty for the local people where nothing else existed. The question that remains now though is what will happen after ISIS, because what they managed to do, be it in the most barbaric way imaginable, is to galvanize Iraq temporarily. They even allowed for the people to come together to fight against the systems that were not serving them," Mabon said.

"What we are seeing now in both Syria and in Iraq is that even more complex problems have already emerged with the increased inter-tribal rivalries, and the in-fighting and political stalemate. The future holds even more uncertainty than ever before," Royle added.

Speaking about whether an alternative strategy in the Middle East could have been better in both managing and even preventing the rise of groups such as Daesh, Mabon responded by saying:

"Considering the scale of people affected by the instability in Iraq, and now seeing the new younger generation with no prospects, the huge vacuum created has been too strong. If the processes managed in a careful way, we could have seen a smaller number of people left disenfranchized and the Politics could have been different with less chaos ensuing."

Both academics acknowledged that there are far wider dynamics also at play in the regions where Daesh have had a considerable hold.

However, they also noted that western intelligence is certainly more advanced now than ever, and so it is hoped that an end to the barbarism associated with Daesh-type ideologies will be imminent.

"Part of the problem still however, is that no one is listening to such findings as have been revealed about what is really at play on the ground.

"Defeating ISIS is the primary focus and understandably so, but where one group is removed, there are countless numbers of others ready to take their place," Royle said.

"The real hidden focus that is not being addressed is very much about meeting the very basic, human needs of the people. Until this happens, the world will never be an entirely safe place," he concluded.

Red Cross to Increase Budget for Syria, Iraq, Other States in Need by 10%