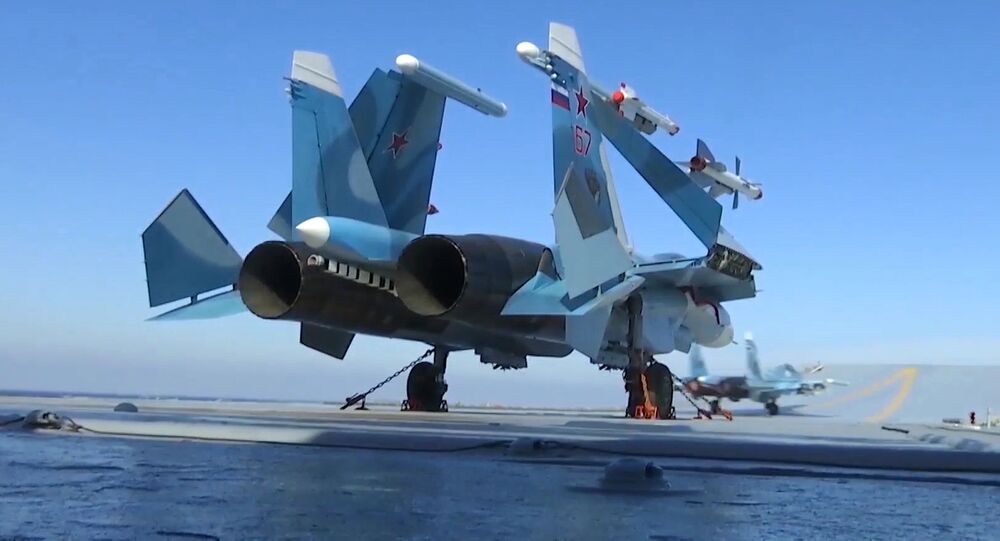 At least 30 militants from the Jabhat Fatah al Sham including a commander who had planned an offensive in Aleppo, were eliminated as a result of airstrikes launched from the Admiral Kuznetsov aircraft carrier.

© Sputnik / Russian Defense Ministry
Russia's Admiral Kuznetsov Aircraft Carrier Begins Combat Operations in Syria (VIDEO)
MOSCOW (Sputnik) – At least 30 militants from the Jabhat Fatah al Sham, also known as al-Nusra Front, or Jabhat al-Nusra, radical group, including a commander who had planned an offensive in Aleppo, were eliminated as a result of airstrikes launched from the Admiral Kuznetsov aircraft carrier, a spokesperson of the Russian Defense Ministry said.

"During a massive fire strike this past Tuesday, Jabhat al-Nusra militants were dealt serious damage. As a result of the strikes conducted by carrier-based Su-33 fighters from the aircraft wing of the Admiral Kuznetsov cruiser, a large formation of the Jabhat al-Nusra group was destroyed in the Idlib province," Maj. Gen. Igor Konashenkov said.

According to the spokesperson, intelligence data has confirmed the death of at least 30 al-Nusra members, including several field commanders, one of whom was involved in the planning of offensive operations in Aleppo.

"Eliminated field commander Abul Baha al-Asfari was in charge of uniting the remaining reserves of Jabhat al-Nusra groupings in the provinces of Aleppo and Hama, as well as of planning and carrying out another militant attack on Aleppo," Konashenkov said.

On October 15, Russia's Northern Fleet’s press service said that a group of warships headed by the Admiral Kuznetsov accompanied by the Pyotr Veliky battle cruiser, the Severomorsk and Admiral Kulakov anti-submarine destroyer and support vessels had been sent to the Mediterranean.

In September 2015, Russia launched a military operation against terrorist groups in civil-war-torn Syria at the request of Syrian President Bashar Assad. Radical groups operating in Syria include Jabhat Fatah al Sham and the Islamic State (ISIL, also known as Daesh), a group banned in Russia and the United States, as well as various other countries.

'Find and Kill': Obama 'Has Good Reason to Crack Down on Al-Nusra Front'