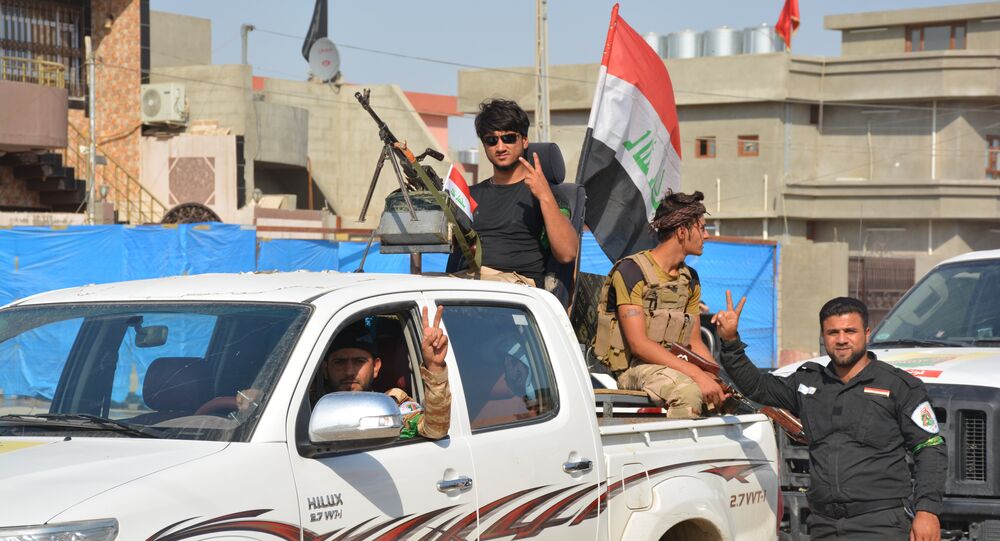 Iraqi Militia to Sputnik: 'Our Goal is to Cut Link Between Daesh in Iraq, Syria'

The offensive against Daesh in Mosul is progressing, with Iraqi army units reported to have begun their advance into the city. Speaking to Sputnik from the western front, Ahmet Aslan, commander of a Turkmen unit of the Popular Mobilization Forces, said that his unit's task now is to sever the link between jihadists operating in Iraq and Syria.

© AFP 2020 / BULENT KILIC
Iraqi Militia to Sputnik: 'We Only Wish Reports of Daesh Coming to Mosul from Raqqa Were True!'
The Popular Mobilization Forces (PMU) is a major Iraqi state-supported umbrella group consisting of about 40 militias, mainly Shia Muslim ones, but also Alawite, Sunni, Kurdish, and Turkmen units. The PMU has been engaged against Daesh in Iraq for the past two-and-a-half years now.

Speaking to a correspondent from Sputnik Turkey, Ahmet Aslan, commander of a PMU unit of Turkmen fighters, explained that his forces' goal now is to advance on the city of Tal Afar, 63 km west of Mosul. The major city of 200,000, inhabited mostly by Shiite Turkmen, will be an important stop in the drive to kick Daesh out of Iraq.

"The militia has shifted to the active combat phase, with the goal of breaking the link between the Daesh jihadists in Syria and Iraq," the officer said.

"Currently our forces are moving from the area of Qayyarah towards Tal Afar. We have made significant progress. The main objective of the operation is to block the path for militants retreating from Tal Afar to Syria. In addition, we plan on cutting off the source of jihadi reinforcements into Iraq from Syria. For this purpose, we are carrying out an operation to encircle the militants and to squeeze them into a tight ring."

At the moment, Aslan said, "the jihadists are not resisting. They are simply fleeing. It was the same way in the battles in Tikrit and Fallujah – they just fled from the battlefield."

© AFP 2020 / BULENT KILIC
A Tale of Two Terrorist-Held Cities: How the Fight for Aleppo and Mosul Differ
The commander stressed that the liberation of Tal Afar would help accelerate the efforts to eliminate the Daesh stronghold in Mosul.

The commander noted that "the PMU are fighting against the terrorists for the sake of their own country and its people. We are ready to confront Daesh in Syria as well, if such a proposal comes from official sources. We are prepared to fight the jihadists wherever they may be located."

The operation to liberate Mosul from Daesh officially began on October 17. Over 30,000 Iraqi troops, and 4,000 Kurdish fighters, are taking part in the offensive, supported by US-coalition airstrikes. Shia militia have been helped surround the city from the west, but have been asked not to enter the mostly Sunni and Kurdish city itself. Mosul was seized by the jihadists in 2014.