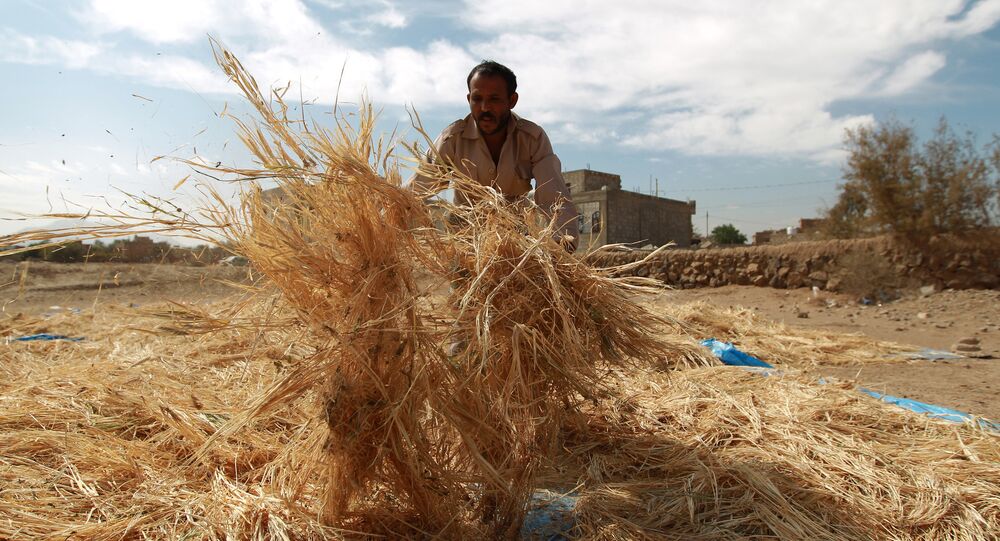 A Saudi-led coalition has resumed its airstrikes around the Yemeni capital Sanaa on Sunday, just hours after a 72-hour cease-fire expired. Professor Martha Mundy, a specialist in the anthropology of the Arab World told Radio Sputnik that besides the airstrikes, Saudi Arabia is waging "clear economic war" on the country.

© Sputnik / Andrey Stenin
West Targets Countries With Close Ties With Russia - Gaddafi Cousin
The Saudi-led coalition has resumed its air strikes in Yemen hours after a three-day truce in the country expired.
Residents reported attacks on some military sites in Sanaa as well as raids on radar positions in the Houthi-controlled city of Hodeida.

The new barrage of air strikes happened only hours before a UN envoy arrived in Yemen. He was reportedly planning to discuss options for a political solution with Houthi representatives and try to secure another ceasefire.

Meanwhile, there is growing evidence which shows that Saudi Arabia is deliberately targeting impoverished Yemen’s farms and agricultural industry.

More and more academics share the opinion that the Saudis are trying to destroy Yemen's rural livelihood. They warn that more than half of the population of Yemen relies on agriculture, and the ongoing Saudi campaign is likely to prevent Yemeni farmers from returning to work for many months or years.

Radio Sputnik discussed the issue with Dr Martha Mundy, an anthropologist and emeritus professor at the London School of Economics, who is currently working in Lebanon, but who worked in North Yemen from 1973 to 1977.

Her book Domestic Government: Kinship, Community and Politics in North Yemen (1995) is a contemporary classic. Dr Mundy is now working on the political economy of food in Yemen.

She told Radio Sputnik that even though it is the job of international organizations to work with the technical ministries in Sanaa to undertake a full damage assessment in the country, there is a specific unit funded by all the big players based in the World Bank. However they have not released any of their reports.

Meanwhile the International Labor Organization (ILO) provided survey data of the labor force in three Yemeni provinces in the autumn of 2015: Sanaa, Aden and Hodeida, which shows that seven to eight months into the war the displacement affected mainly the rural population. Two thirds of those displaced came from rural areas and women accounted for 95 percent of those displaced.

The report goes on to say that agriculture has been the sector most affected by the crisis with the loss of almost 50 percent of its workers.

When asked if the Saudis have been deliberately targeting agriculture to destroy and eradicate the livelihood of the country or was it collateral damage, Dr Mundy responded that there are two answers to this question.

"Before we get back to the bombing data one needs to bear in mind that the blockade that was imposed with very little real legal coverage from the UN Security Council resolution 2216 and which was basically run by the Saudis for almost one full year before the UN even got there, has cut off fuel supplies to agriculture and of course the food Yemen has been importing," she told Sputnik.

© AP Photo / Hani Mohammed
Airstrikes Resume Immediately as Yemen Cease-fire Expires
The country has been importing a large proportion of its grain and oil for consumption, she specified. Thus the country already has an embargo, a blockade in place.

"With regards to the bombing data, it depends on the area. Certainly the extraordinary level of strikes in Sadah province, in Hajjah province and to some extent in Hodeida and in Sanaa and Amran indicate that it is certainly not possible that this is all collateral damage," she said.

Dr Mundy also noted that there have been escalating attempts to bring down the Yemeni banking system and to force its Central Bank to be moved to the city of Aden.

"There is a clear economic war there," she said, noting that the Saudis now have huge leverage on the country through the growing dependency of large parts of its population on food aid.

© AFP 2020 / AMEER ALHALBI
US, Allies Massacre at Will, Yet Condemn Russia
The food is coming in, she said, but the main provider of this food is Saudi Arabia. And the province of Sadah is completely excluded from any of the incoming food.

Hence it is very important that the media discusses it because the activists do not want the people to die. Especially given that the Saudis are controlling who is receiving the food and when they get it.

The Saudis do react to the media coverage of their economic war on Yemen, their airstrikes on the country's entire productive infrastructure and starvation. Even though it is very difficult to reach out with this data. However, social media has been important in bringing the truth to light, Dr Mundy finally said.