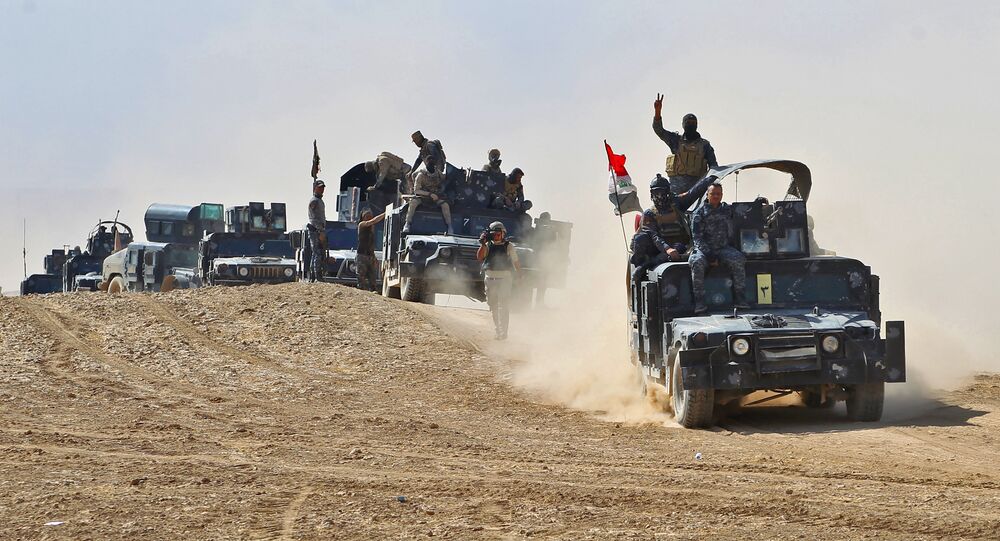 The current attempt to liberate the Iraqi city of Mosul is looking promising. A US-led coalition is expected to use an approach that was previously applied during the liberation of Manbij in Syria. It cannot be ruled out that the city will be liberated by the US presidential election on November 8.

© REUTERS / Thaier Al-Sudani
Coalition Carries Out Six Airstrikes in Mosul in 24 Hours - Russian MoD
An offensive on Mosul has been declared several times, but the ongoing operation is not at all like previous efforts to liberate Iraq’s second-largest city.

The United States military and the Iraqi Army are intensely coordinating actions, and the current anti-Daesh operation appears to be well-planned, an article on the Russian analytical website Svobodnaya Pressa read.

The offensive involved a large number of various military groups and units. For example, Commander of the Iranian Quds Force special unit Maj. Gen. Major Qasem Soleimani was spotted at the Qayyarah base, the centerpiece of the operation.

In addition, a number of Shia units were included into the Iraq Army. This will allow for preventing ethnic cleansings, like what took place in Ramadi and Fallujah. In addition, it is possible that the Kurdish Peshmerga forces include units of the Turkish Special Forces.

Despite the number of forces involved in the offensive, they are being coordinated in a way to prevent conflict during the early stages of the operation. The Peshmerga forces, Iraqi Turkmen, police forces and the 9th division of the Iraqi Army are expected to approach Mosul from the northeast and east while the bulk of the forces will come to the city from the south.

© REUTERS / Thaier Al-Sudani
Iraqi Prime Minister Says Foreign Ground Forces Not Involved in Mosul Operation
At the moment, the Iraqi forces coming from the south, from the Qayyarah base liberated in summer, are dozens of kilometers away from Mosul. On this flank, the forces are backed by US artillery that was deployed to the airfield in July, including M777A2 howitzers and M109A6 Paladin self-propelled guns.

However, Daesh militants have conducted several counterattacks, with the use of jihad-mobiles.

On October 17, in the first day of the operation, the US-led coalition carried out 52 airstrikes against Daesh targets. In the coming days, coalition forces expect to intensify airstrikes.

"It cannot be ruled out that by the presidential election in the US on November 8, an Iraqi flag will be raised on the central square in Mosul. This will play into the hands of Democrat candidate Hillary Clinton," the article read.

© AP Photo / Raqqa Media Center of the Islamic State group, File
Mosul-Style Op Against Daesh Needs to Be Prepared in Syria's Raqqa - French FM
The US military applied a new tactic during the assault on the Syrian city of Manbij. The approach includes intense airstrikes on certain parts of the city, but not on the central districts. Thus, militants and civilians are forced to move to other areas of the city. Then, ground troops enter the city for a mop-up operation. From the rest areas of the city, civilians and militants will be let out of the city.

According to the article, such a tactic is likely to be applied during the liberation of Mosul.

"Taking into account the fact that there are so many various players involved in the offensive, the question about possible conflict between them remains open. However, serious conflicts are unlikely during the combat actions," the article read.

At the same time, as soon as the city is liberated tensions and differences are likely deepen. There will be two acute problems, including who will be in control over the city and who will control over oilfields, in particular in Kirkuk.