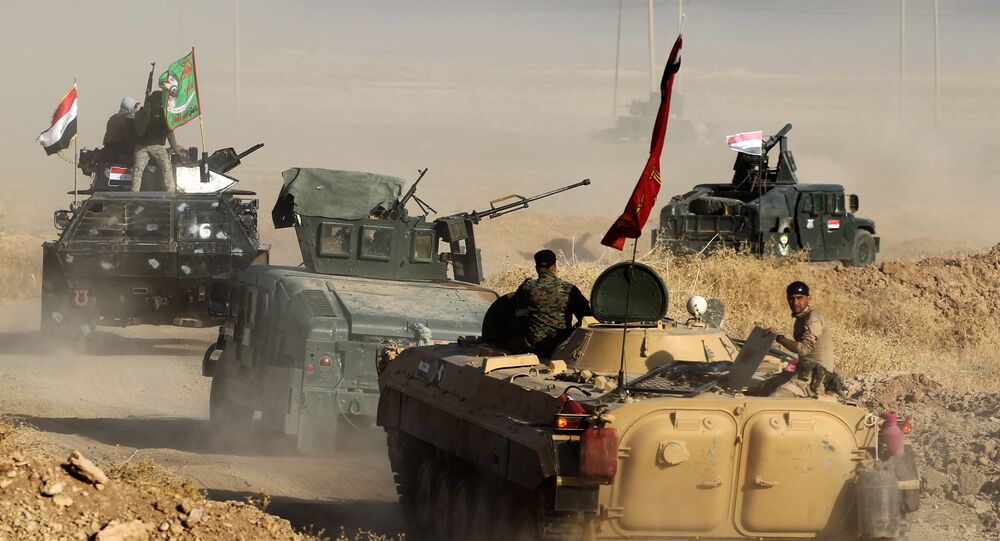 Mosul Operation Risks Becoming Even Bloodier Than Battle of Aleppo

The Iraqi Army and Kurdish Peshmerga forces are bracing for a major offensive aimed to liberate Mosul, the main Daesh stronghold in Iraq. However, the operation may put at risk the lives of hundreds of thousands of civilians residing in the city.

© REUTERS / Stringer
Number of Civilians Fleeing Mosul Amid Military Operation 'Not Huge' - Red Cross
Mosul is the second-largest city in Iraq. Its liberation is an important part of a military operation by the Iraqi Army and Kurdish forces to cleanse the country of terrorists. The city was seized by Daesh in 2014 along with a number of other northern and western Iraqi cities and towns. According to media reports, at the moment there are at least 10,000 Daesh militants in the city, including 2,000 recruited foreign fighters.

The International Committee of the Red Cross (ICRC) warned all the parties involved in the future offensive that they should separate civilians and military targets.

The current humanitarian situation in Iraq is difficult. There are over three million displaced people across the country.

"We expect that as soon as the operation begins hundreds of thousands of people will leave the city. They will need shelter, food, water and medicines," Sarah Al-Zawqari, a member of the Iraqi branch of the ICRC, told RIA Novosti.

Daesh Can Hide in Mosul, Rule Through Surrogates Until US Moves Elsewhere
On Saturday, aircraft of the Iraqi Air Force dropped leaflets on Mosul to warn the residents of the upcoming offensive. The government called on the residents not to panic and stay at their homes.

Earlier, Iraqi artillery and warplanes of the US-led international coalition conducted strikes on Mosul. An Iraqi military source said that the shelling was aimed to destroy certain targets prior to the main offensive.

The Iraqi military estimates that the liberation of Mosul would take one- to two weeks.

In addition to Iraq, Kurdish forces and the United States, Turkey will also be involved in the Mosul operation. Earlier, a Turkish military source told CNN Turk that Turkish troops and the Shiite militia would not be involved in the offensive. However, later President Recep Tayyip Erdogan said that Ankara would play role in the US-backed offensive on Mosul.

© AFP 2021 / YASIN AKGUL
Turkey 'On Sidelines' of Mosul Operation, But 'Hopefully Will Get Involved'
"We will be in the operation and we will be at the table," Erdogan said in a televised address on Monday. "Our brothers are there and our relatives are there. It is out of the question that we are not involved."

However, director of the "Russia-East-West" think-tank Vladimir Sotnikov suggested that Turkish troops will not be involved in joint operations with the Iraqi Army in Mosul.

"As for Turkey, its main goal is to establish and secure a buffer security zone at the border. Turkish troops, Special Forces and tanks are unlikely to be engaged in the operation," Sotnikov told RT.

Taking into account the number of civilians in the city and the combination of different interests pursued by various actors, the Mosul offensive risks becoming the "bloodiest massacre," incomparable even to the humanitarian disaster in Syrian Aleppo, an article in the Russian online publication Vzglyad read.

"The outlook is very pessimistic, both for airstrike and a ground offensive. Terrorists could use civilians as human shields," said Andrei Koshkin, head of the political science department of the Russian Economic University.

© AFP 2021 / SAFIN HAMED
Iraqi Operation to Liberate Mosul to Include a 'Corridor' for Daesh Militants Fleeing to Syria
Apparently, Washington and Riyadh understand that the Mosul offensive could turn into bloodshed. According to a source in military and diplomatic circles in Moscow, the US and Saudi Arabia plan to allow over 9,000 Daesh militants to leave Mosul and move to Syria.

"American and Saudi intelligence services have reached an agreement to provide all militants a safe passage to leave the city with their families before" Iraqi security forces and their allies launch the operation to free Mosul, the source told RIA Novosti last week. The matter was ostensibly settled during the preliminary phase of the offensive.

At the same time, experts doubt that the US will launch a major ground operation to liberate Mosul.

"Despite numerous Pentagon attempts to deploy troops in Iraq, President Barack Obama is unlikely to do that. First, he doesn’t want to take risks. Second, he wants to give Democrat candidate Hillary Clinton a chance to win the election, so the Democrats want to be free of unwanted obligations," Sotnikov explained.

His assumption was shared by Koshkin.

"The US has not planned a military operation during their presidential elections. The Pentagon doesn’t like this situation. One president starts a war and the new president will not be responsible for the actions by his predecessor," he pointed out.

Mosul Liberation From Daesh to Be Difficult Fight With Setbacks - Obama