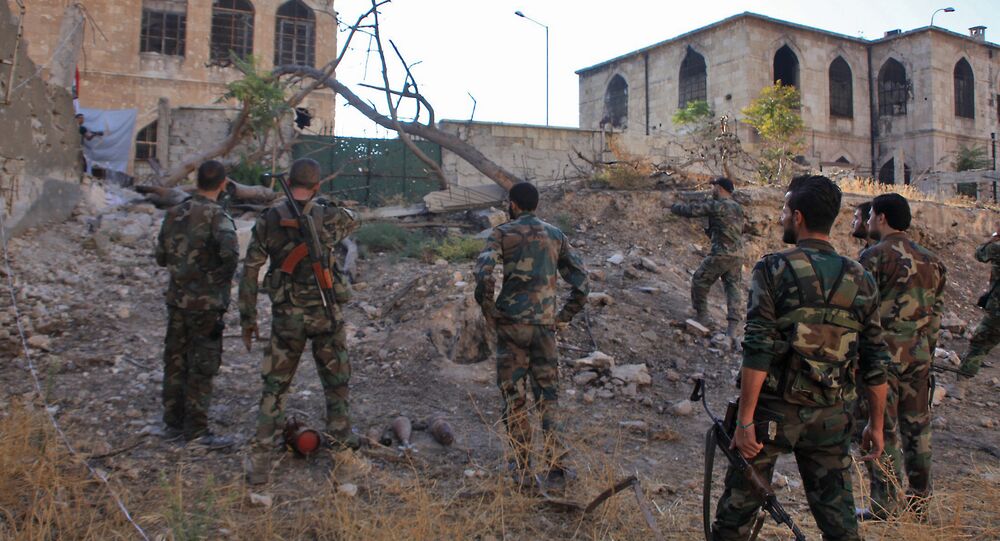 Syrian Army to Use All Military Means to Repel US Aggression

The Syrian army will deploy all its military means to repel aggression stemming from the United States, a source in the Syrian Defense Ministry told RIA Novosti on Tuesday.

"The Syrian army will not hesitate to defend its land, country and the government. It will use all its military capabilities to repel US airstrikes or any other US attempts to commit aggression against Syria," the source said.

"But we also believe that the US will think twice before conducting any strike against Syria, given current Russian presence in Syria and Russian-Syrian military cooperation," the source stressed.

The Russian Defense Ministry said last week that a battery of S-300 air defense systems had been delivered to Syria to protect a naval facility in the port of Tartus as well as Russian warships deployed off the Syrian coast.

Moreover, the Syrian government forces will not delay their campaign to liberate Aleppo from militants, the source added.

"We believe that this situation in Aleppo will not drag on… The army has its own strategy aimed at taking the soonest control of Aleppo without delaying the process," the source said.

Advances in Aleppo by the Syrian government forces have caused internal conflicts among terrorists across other regions, the source stated.

"The plight of terrorists in Aleppo is hard and, moreover, they will meet even greater problems. This is evidenced by conflicts starting between terrorist groups in Aleppo, Idlib and Hama due to losses," the source said.

Fighting between government forces, jihadists and numerous militant groups in Aleppo intensified after the Syrian army declared an end to the week-long ceasefire on September 23, blaming militants for numerous violations of the cessation of hostilities.

© REUTERS / Ammar Abdullah
Over 80 Syrian Soldiers Killed in US Airstrike in Deir Ez-Zor - Syrian Presidential Aide
The Syrian army will advance toward Deir ez-Zor, Raqqa and Idlib after liberating Aleppo, the source said.

"The most important tasks for us now are in three provinces: Deir ez-Zor, Raqqa and Idlib. Therefore, the Syrian Arab Army strategy will definitely focus on these regions. Although the highest military and political leadership will ultimately decide what is the priority direction," the source said.

The high-level official noted Idlib's importance because of its proximity to the Turkish border and the Jabhat Fatah al-Sham (formerly al-Nusra Front) militant group using it as a staging area. Raqqa is the de-facto capital of Daesh, which finances its operations in part through extracting and smuggling oil from the southeastern city of Deir ez-Zor.

Moscow and Ankara Will Cooperate to End Bloodshed in Syria