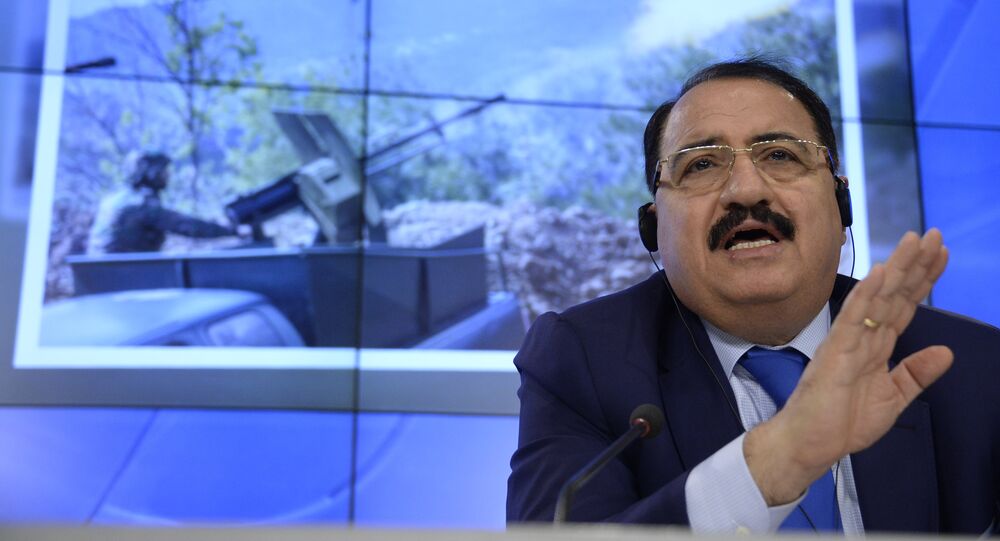 Syrian ambassador to Russia said that US airstrike on the Syrian army near Deir ez-Zor could not be a mistake and could have been a cover for the Daesh’s offensive.

© REUTERS / Ammar Abdullah
Over 80 Syrian Soldiers Killed in US Airstrike in Deir Ez-Zor - Syrian Presidential Aide
MOSCOW (Sputnik) – The US airstrike on the Syrian army near Deir ez-Zor could not be a mistake and could have been a cover for the Daesh offensive, Riyad Haddad, the Syrian ambassador to Russia, told Sputnik.

"We submitted a request to the [UN] Security Council and the United Nations about blatant interference with and bombing of the Syrian armed forces in Deir ez-Zor. Americans said firstly that it was a mistake. We are sure that it was not a mistake because the Syrian forces had been deployed in the area for more than two years. There are maps of operations and everybody knows that the Syrian army is deployed in this area and there were no changes. Consequently, they know that the forces of the Syrian army are in this location," Haddad said.

He added that the bombing lasted for 50 minutes and it was impossible not to understand that the attacked positions belonged to the Syrian army.

"The Daesh terror group waited for the end of the bombing and then launched an offensive to seize the Al Sarda mountain. That could be a preliminary bombing to cover the Daesh so that it could seize Al Sarda… That is a strategic site to observe the airport of Deir ez-Zor… That is why we are sure that it was not a mistake but an intentional attempt to evade fulfilling the ceasefire agreement signed with our Russian friends," Haddad added.

On September 17, the aircraft of the US-led coalition carried out four airstrikes against positions of the Syrian government troops near Deir ez-Zor, leaving 62 personnel killed and some 100 wounded. The Pentagon said that the airstrike was a mistake and targeted Daesh militants.

The Russian Aerospace Forces have achieved most of the stated objectives during their missions in the war-torn country, Syrian Ambassador to Russia said.

"The Russian air campaign in Syria has achieved the majority of stated goals in the fight against terrorism," Haddad said.

According to Haddad, the Russian air and cruise missile strikes have crippled terrorists' military potential and "changed the rhetoric of many countries that counted on the demise of the Syrian state."

The Syrian diplomat also said the Russian strikes sent a clear signal to terrorist groups that the war against them was serious and relentless, forcing many terrorists to lose their will to fight.