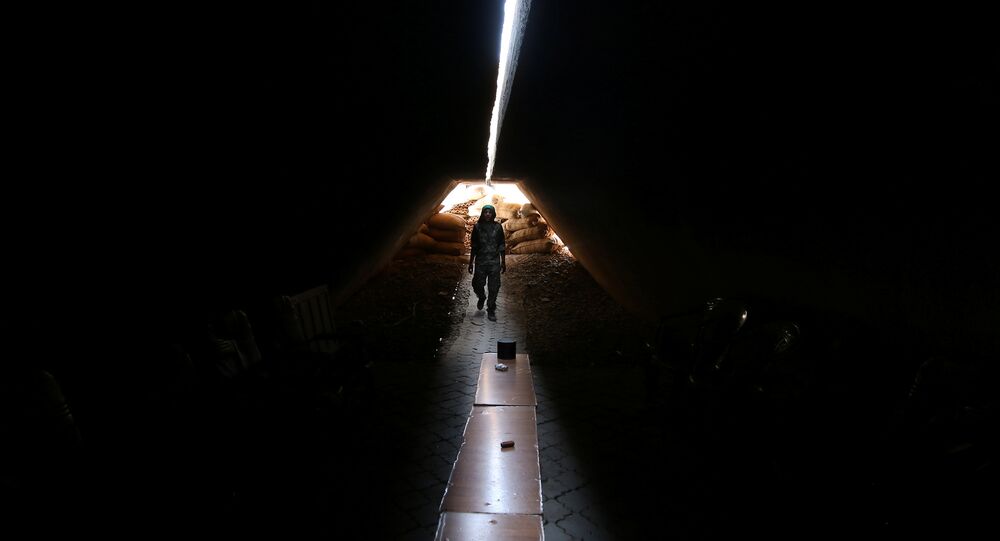 The Turkish intervention in Syria might be a very unpleasant development for the US, who backs the Kurdish forces in northern Syria. Could this be the reason for America’s pause on attacking Daesh positions in Raqqa?

© REUTERS / Umit Bektas
This is Why the Turkish Operation in Raqqa Will Serve Russian Interests
Joint operations by the Syrian Army, Russian Aerospace Forces, the US-led coalition and, more recently, Turkey, have pushed the Daesh jihadist group's forces into smaller separated enclaves, scattered across Syria and neighboring Iraq. The group established two de-facto capitals — or strongholds — one in each country: Raqqa in Syria and Mosul in Iraq. Capturing Mosul will deliver Daesh a crushing blow but capturing Raqqa may (not necessarily, but likely) lead to destruction of Daesh as a more or less centralized force (considering, of course, the Al-Qaeda know-how of de-centralization of terror cells).

Recep Tayyip Erdogan, the president of Turkey, who recently joined the fight against the jihadists, has disclosed Barack Obama's intention to advance on Raqqa and confirmed Turkey's readiness to support the offensive.

"Obama wants to do some things jointly concerning Raqqa," Erdogan told journalists during his return flight from G20 summit. "We said this would not be a problem from our perspective. Our soldiers should come together and discuss, then we will do what is necessary."

© Sputnik / Michael Alaeddin
US Wants Respite, Not Ceasefire in Syria
However, the US command has recently decided to put the advance on Raqqa on hold, opting to take Mosul instead. This has been officially announced by Lt. Gen. Stephen Townsend, the new commander of the US-led coalition against Daesh.

It seems that Turkey and the US failed to find common ground regarding Kurds, who effectively created a core of so-called Syrian Democratic Forces, along with various Arab, Assyrian, Armenian, Turkmen and Circassian militias.

The US backs Kurds to a significant degree, provide the coalition with both material and military support. There are also one to two hundred American "special operators" embedded within Kurdish ranks on the battlefield.

For Turkey, on the other hand, the Kurds are an essential threat, considering the long-time movement of Kurdish separatism within Turkey itself. Should Kurds gain strength in Syria, they will eventually take the fight to the Turkish territory, and Syrian Kurds proved to be quite able fighters with experience from beating Daesh forces back from the northern part of Syria, and now bolstered by the training of US Special Forces.

With that in mind, it is no wonder that Turkish forces did not hesitate to engage rebel (i.e. mainly Kurdish) groups even despite the fact that they are backed by the US, creating a complication for the Obama administration's strategy on Syria big enough for Pentagon to put the offensive on hold.

If Turkey manages to paralyze the Pentagon's main protégé, it will be open to discussion as to who would have to take Raqqa. Maybe, the coalition (read US) ground troops? Or, what if, the Russian-backed Syrian army, steps in to save the day?