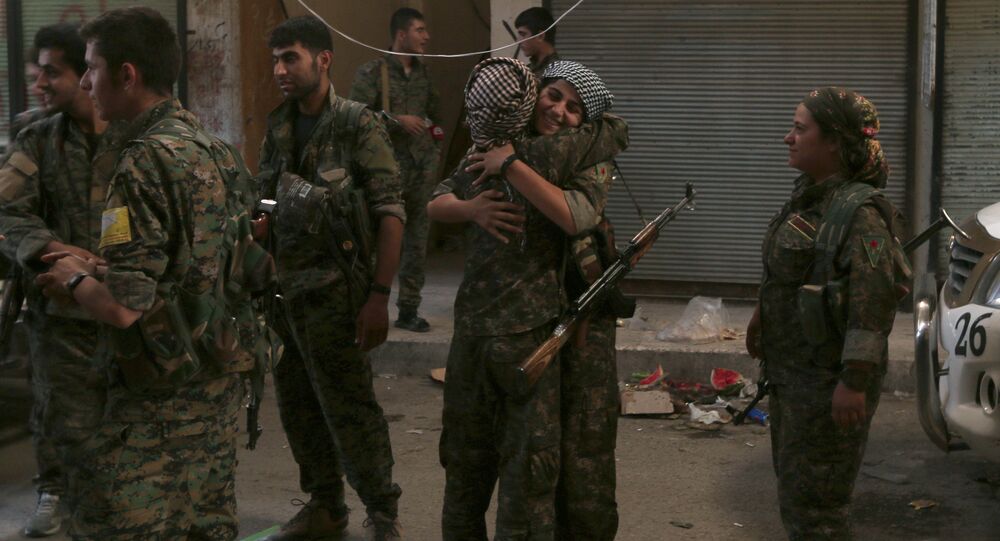 Citizens of Manbij 'Dancing in Streets, Crying' After Liberation From Daesh

The city of Manbij in the northern side of the Syrian province of Aleppo is gradually returning to normal life after liberation from Daesh militants.

© REUTERS / Rodi Said
Syria's Key City of Manbij Liberated From Daesh, Militants Seek to Escape
According to the representatives of the Manbij military council, more than 172 thousand residents of the city previously evacuated to refugee camps or those who managed to find refuge in the cities of Kobani and Afrin have started returning back to their homes.

Abdulaziz Yunus, head of the external relations of the Syrian Democratic Forces, spoke to Sputnik about the current situation in the city and short-term plans on how to restore normal life for the citizens of Manbij.

“Residents of Manbij with tears of happiness in their eyes are returning to their hometown. They are celebrating the liberation of the city from Daesh terrorists. Throughout the city, a festive mood prevails. People are dancing and singing in the streets, hugging each other and crying,” Yunus said.

He further said, “Women can no longer be afraid of smoking cigarettes and can dress as they please. From now on, everyone can live in freedom, without fear of losing lives for the slightest misbehavior. Dozens of residents of Manbij joined ranks of women's unit of the Kurdish YPJ Self-Defense Forces. We are engaged in finding and neutralizing mines and booby traps in the city.”

All the villages around Manbij have been freed from Daesh but a number of settlements on the highway along the Jarabulus are still under control by the jihadists. These villages will be liberated in the coming days.

Talking about the short-term plans for the city of Manbij, Yunus said, “We will pass the management to the Manbij civil authorities. In the city the Civic Council has already started functioning.”

© Photo : ARAB 24
Pentagon: Daesh Uses Civilians as Human Shields While Fleeing Syria’s Manbij
He further said that currently there are no Kurdish YPG self-defense units in the city. “The YPG assisted the Democratic Forces of Syria but in Manbij there are only local fighters. The military council of Manbij acts to secure the city's population,” the head further explained.

Earlier, it was reported that the Syrian Army, backed by the US coalition, liberated the country's key northern city of Manbij, located close to the Turkish border, from Daesh, the US Department of Defense said in a press release.

According to Pentagon, Manbij served as a hub for recruiting foreign fighters and for sending terrorists across the Turkish border for potential use in military operations.

Syria has been mired in civil war since 2011, with government forces loyal to President Bashar Assad fighting a number of opposition factions and extremist groups. The Syrian Army backed by US coalition fought 73 days to expel Daesh out of Manbij.

The US-led coalition of more than 60 nations has been conducting anti-Daesh airstrikes in Syria and Iraq since 2014.