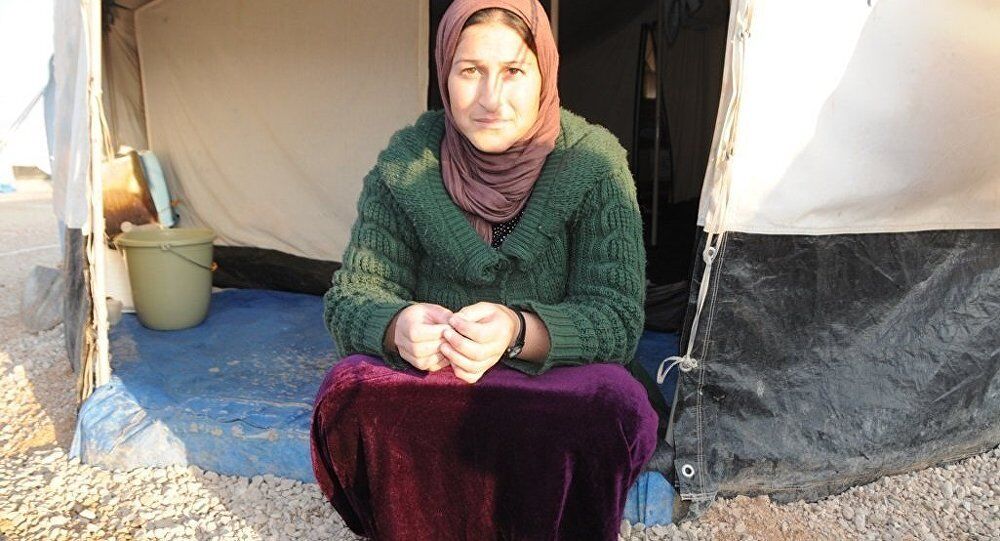 Exactly two years after the Daesh terrorist group massacred and abducted the Yazidi community in Sinjar, survivors of the tragedy told Sputnik they fear their plight has been forgotten.

After taking control of the town and the surrounding areas, Daesh terrorists massacred 5,000 Yazidi men and took thousands of people hostage.

A rescue operation by Kurdish People's Protection Units managed to free hundreds of Yazidis being held captive in northern Raqqa, and Kurdish Peshmerga fighters also freed hundreds who were being held by Daesh in Mosul.

© AFP 2021 / SAFIN HAMED
Fierce Battle Rages Between Yazidi Forces and Daesh in Sinjar (VIDEO)
The UN and the Iraqi government have called Daesh's crime a genocide against the Yazidi people. On Wednesday the UN reported that two years since the massacre, more than 3,200 women and children still held by the group and being subjected to almost-unimaginable violence.

"Most are in Syria where Yazidi women and girls continue to be sexually enslaved and Yazidi boys, indoctrinated, trained and used in hostilities. Thousands of Yazidi men and boys remain missing," the Un wrote.

On November 14 2015, Kurdish fighters liberated the city of Sinjar from Daesh, and regained control of most of the surrounding villages.

However, Daesh fighters remain in some villages, and Yazidis who survived the attack remain in refugee camps, fearful of returning home to Sinjar as they are afraid of more terrorist attacks.

Rosa said that she and her children were forced to flee the terrorists on foot.

"We walked for several days, I still feel ill when I think about it. Daesh are still holding hundreds of our friends and relatives. Some of them were released for money," she explained.

"Now we're living in a camp, but we are like living dead, because all our relatives are in different places. Some are in Iraq, some had to flee to Europe or other countries. The Iraqi and Kurdish governments are not thinking about us. When the mass killings started, the whole world defended us. Now they have forgotten about us," she said.

"The town has been freed, but the surrounding areas are still under the control of Daesh. Here only the managers of this camp are protecting us, nobody else is thinking about us," she said.

"On August 7 2014 my husband, five children and I were brought to the camp at Derik. As we were escaping, our daughter was shot and killed by Daesh. It was very hard for us to get here. We still cry often, because we cannot forget the murder in Sinjar, we are in constant pain and sorrow. Our women and children are kidnapped by Daesh militants, raped and sold. Many girls who were raped, killed themselves," Rekhime said.

"My wife, ten children and I arrived at the refugee camp on August 8, 2014. I left my family here, and went back to Sinjar to fight against Daesh," he said.

"We want to return to our towns and villages as soon as possible. (However), we will not return to the city, because it is in ruins. There aren't many people living in the center of Sinjar, because the conditions are not suitable for living there."

Venna said that the allied groups which drove Daesh from the city in November, are yet to agree about how the area should be governed.

"There are also problems with the leadership of the city, there are a lot of different armed forces such as the Peshmerga, the Sinjar Resistance Units, the People's Protection Units and others. They can't agree among themselves, and this problem inevitably affects our return," Venna said.