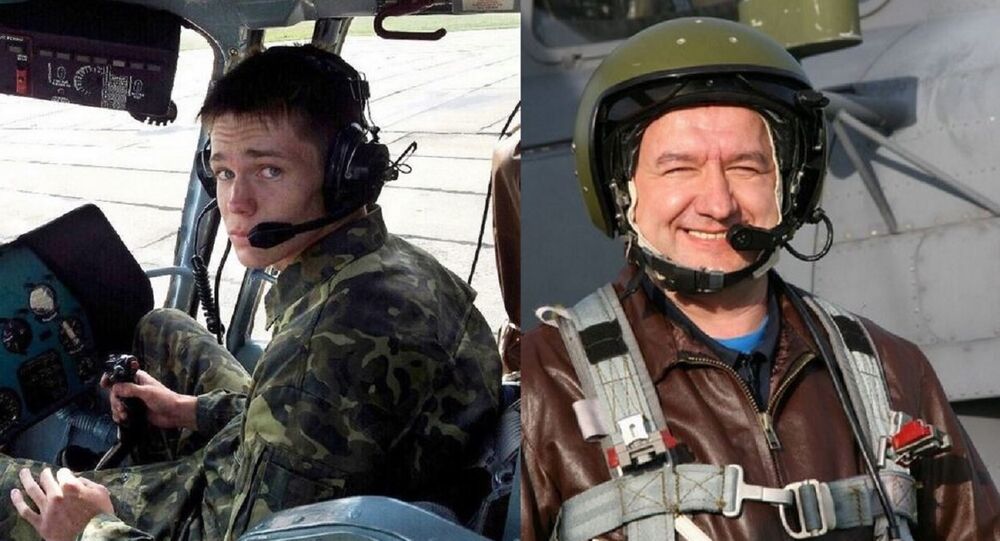 Two Russian pilots were killed after their military helicopter was shot down by fighters of Daesh during a combat mission on July 8. The Syrian Mi-25 helicopter was flown by Ryafagat Khabibulin and Yevgeny Dolgin at the request of the Syrian government forces.

© Sputnik / Mikhail Voskresenskiy
Daesh Terrorists Shoot Down Helicopter Near Palmyra, Killing Two Russian Military Instructor Pilots
“The crew received a request from the Syrian unit's command to strike the advancing fighters. Captain Ryafagat Khabibulin made a decision to attack the terrorists. The skillful actions of the Russian crew thwarted the terrorists' advance. When the helicopter's ammunition was spent and it changed its course to the opposite direction, it was shot down by terrorists from the ground and crashed in an area controlled by the Syrian government army. The helicopter's crew was killed," the Russian military said in a statement.

The pilots' fate, and the bravery they exhibited in their final moments, has brought forth a wellspring of sympathy and gratitude across Russia. But who were Yevgeny Dolgin and Ryafagat Khabibulin and how their death is a great loss to Russian military?

Yevgeny Dolgin was born in January 1992, and since childhood was fascinated with the skies. His love for aviation could have been passed to him by his father who graduated from Syzran Higher Military Aviation School. He also participated in the Chechen campaign.

A few years ago, Yevgeny graduated from the same school as his father, and as Ryafagat Khabibulin, with whom Yevgeny made his final flight.

As his friends recall, Yevgeny was a romantic and extremely kind-hearted young man. When his beloved graduated from university, Yevgeny came to her graduation in his army uniform straight from service, got up onto the stage and in front of everyone proposed to her.

In September 2015, the couple got married. He continued his service, while his wife Katerina got a job at the Pskov Regional College of Arts.

“He was kind, responsive, and honest. When the turmoil in Syria started some left their positions so as not to go to war, but he never condemned anyone. He said he could not do that,” Katerina recalls him as saying.

“I want to fly, it's my job, so in early June, he left for East. I asked him: ‘Zhenya you're not afraid?’ and he replied ‘Why should I be afraid? This is my profession, I’ve studied this.’”

Yevgeny stayed courageous and fearless throughout his short-lived service in the army.

Ryafagat Khabibulin was a legendary ace in the army’s aviation corps. Almost 80% of Colonel Khabibulin’s personal flight books are filled with hours and minutes of flying during actual combat conditions.

© Sputnik / Alexei Druzhinin
Putin Urges to Pray for Russian Pilots Killed in Syria
He often found himself on a shaky line between life and death. At the beginning of the first Chechen war, his Mi-24, returning from a reconnaissance mission came under fire by rebels. Later on the ground, the technicians counted 97 bullet holes. One of the bullets hit the pilot’s foot and fragments hit his other leg and face.

On the verge of losing consciousness, then-Captain Khabibulin showed incredible willpower and piloting skill and despite being badly injured managed to reach his unit. After eight months in hospital he returned back into service.

His flights to evacuate the wounded soldiers stuck in the mountains during battles are studied in the Syzran Military Aviation School as an example of exemplary operations by a helicopter commander during combat.

However, Khabibulin disliked recalling the war. He rightly believed that, apart from experience, war left a heavy burden of sadness.

The preserved documents of that time show that, “In the course of the operation to force Georgia into peace, Mi-8 helicopter crew commander Colonel R.M Khabibulin evacuated 12 wounded soldiers from the fighting zone,” publication Zvezda reported.

He was once asked whether a deputy commander for flight training should himself fly such dangerous missions.

Based on the information of his stated awards, he saved over 48 military personnel from death during combat missions.

“Regiment commander must be able to fly everything that is in his fleet,” Colonel Khabibulin used to say.

True to his words, Khabibulin skillfully learned how to control every new helicopter that came to the fleet and studied it’s pro and cons, informing the manufacturers about what he thought were drawbacks in the new technology.

He believed that during battle, every second can change the course of fighting, hence, risk must be minimized as much as possible.

The commander was born and raised in the village of Ulyanovsk region. His parents worked all their life at the farm. The children were brought up in respect for labor and service. His older brothers served in the army and returned to their native village after completing emergency service.

He was a member of the prestigious Central Group of Forces unit. But then in the 90s his regiment was transferred to Kuban in an open field under Korenovsky. Disputes in the Caucasus regions soon started, which were followed by the wars. Khabibulin was involved in every conflict and only took time off when injured.

Two orders of courage, an order for merit, medal for military merit, combat medal were some of the milestones in the biography of the courageous combat helicopter pilot.

He had over 5,000 flight hours. When Supreme Commander Vladimir Putin came to present the military helicopter air unit with orders, he shook the commander’s hand personally and thanked him for his exemplary service.

The fact that it was Colonel Khabibulin who led a group of Russian pilot-instructors in Syria, was quite a natural occurrence because Ryafagat was the best of the best.

His last fight with Lieutenant Yevgeny Dolgin demonstrated how he did not hesitate to rush into the battle to help his Syrian comrades who have suffered the onslaught of terrorists. The commander and his partner completed the task at the cost of their own lives.