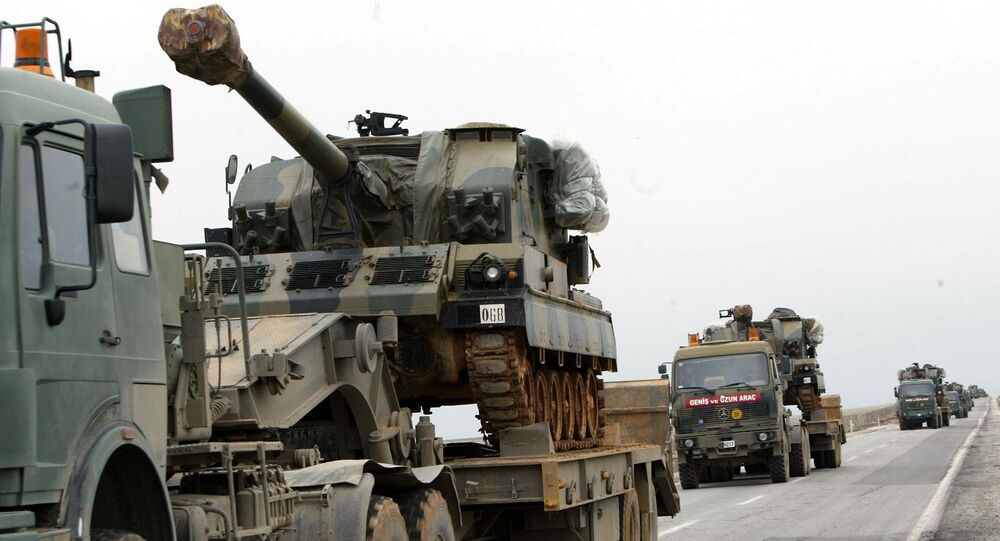 Inching closer to a military invasion of Syria, Turkish President Recep Tayyip Erdogan has threatened to launch "operations" to "clean the other side of the border."

Throughout 2016 there have been growing signs of Ankara’s intention to deploy ground forces in Syria. In February, the Russian government reported "a growing number of signs of hidden preparation of the Turkish armed forces for active actions on the territory of Syria."

At the time, Ankara rejected these claims, even as it launched military actions against Kurds in southeastern Turkey and sent troops into northern Iraq, over the objections of Iraqi Prime Minister Haider al-Abadi.

On Thursday, President Erdogan gave further indication that his government is actively considering the deployment of troops into Syria.

"[Turkey] is doing all the necessary preparations to clean the other side of the border…" he said, adding that such an operation would be justified in order to defend Kilis Province from mortar fire.

Erdogan added that he was disappointed with the lack of support from other nations involved in the five-year Syrian civil war.

"We do not believe the sincerity of any country that has not seen rockets falling on our town as if they fell on Moscow, London, Brussels, Paris or Berlin," he said.

"Let me say it here. We will not hesitate to take needed steps on our own if necessary."

The president’s comments come as no surprise as, in February, he indicated that Syria’s sovereignty was less important than Turkey’s own.

"This has absolutely nothing to do with sovereign rights of states that cannot maintain their territorial integrity. On the contrary, this is about protecting Turkey’s sovereign rights," Erdogan said during a UNESCO Creative Cities Network event in Istanbul.

"We consider any attempt to prevent us from using this right, no matter where it comes from, as a direct attempt against Turkey’s existence."

While the Turkish government’s goal is ostensibly one of national security, Erdogan’s administration has an interest in removing legitimate Syrian President Bashar al-Assad from power. On Tuesday, Russia’s Deputy Foreign Minister Gennady Gatilov criticized the Turkish government for its part in exacerbating the conflict.

"It is a pity that foreign players, and important regional players such as Turkey, continue to play an unconstructive role in this process," Gatilov told Izvestia Daily.

The Russian Foreign Ministry also released a statement on Tuesday in regard to Ankara’s alleged funneling of arms to terrorist groups in Syria.

"Lavrov again pointed to the need for the anti-government formations oriented at Washington to separate from the terrorist groups as soon as possible and to thwart the replenishments to extremists through the territory of Turkey."

Turkey Recalls Envoy From Bangladesh Over Execution of Islamist Leader