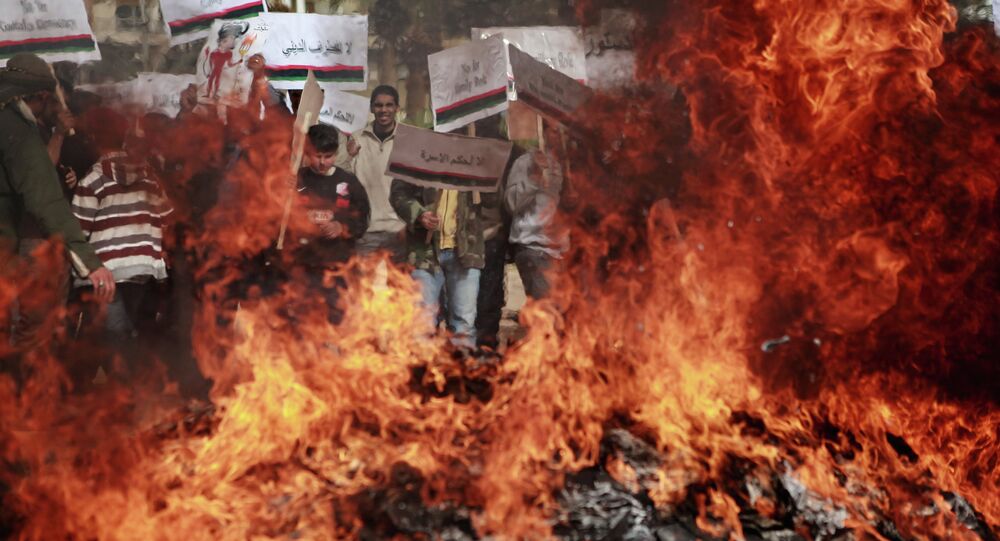 Hillary Clinton's attempt to shift the blame for the effective destruction of the country of Libya has been met with blistering criticism by analysts, anti-war activists and ordinary people around the world. Joining them is Alexei Pushkov, the head of the foreign affairs committee of Russia's lower house of parliament.

© REUTERS / Carlos Barria
Obama Showed Decency Admitting Libya Mistake, But String of Mistakes Continues
At Thursday's Democratic Debate, prodded by Senator Bernie Sanders over her efforts as secretary of state to push for the intervention in Libya, Clinton attempted to brush off responsibility for the disaster, saying that the 2011 intervention in Libya "was the president's."

"Did I do due diligence? Did I talk to everybody I could talk to? Did I visit every capital and then report back to the president? Yes, I did. That's what every secretary of state does," Clinton said. "But at the end of the day, those are the decisions that are made by the president to in any way use American military power, and the president made that decision."

Furthermore, rubbing salt into the wound, which President Obama recently admitted was the biggest mistake of his presidency, Clinton actually suggested that the intervention in Libya failed only "because of the Libyans' obstruction of our efforts."

In fact, she boasted, "I think we did a great deal to help the Libyan people after Gaddafi's demise," despite the fact that Libya, once one of the wealthiest and most developed states on the African continent, has split into several warring states, including Daesh (ISIL/ISIS), and become the very definition of a failed state.

Libya doesn't exist anymore lol. It's been split up by ISIS, other factions, and rival governments. https://t.co/gAqPCC3sGT

​Slammed by Sanders, who insisted that Clinton had "led the effort" for regime change in Libya, and added that "this is the same type of mentality that supported the war in Iraq," Clinton and her comments have since gone on to cause ire among analysts and commentators around the world.

#DemDebate
This is How Cavalier She is about Ragime Change#Clinton ~ Gaddafi: We came, we saw, he died https://t.co/vmr2m8WKc4 via @YouTube

​Most recently, this included Russian lawmaker Alexei Pushkov, the head of the Foreign Affairs Committee in the Russian State Duma, who suggested that Clinton's rhetoric, and her unbelievable unapologetic style, truly makes her a worthy successor to George W. Bush.

"Hillary Clinton said that the United States 'were forced to establish order in Libya.' It seems that she is saying this in all seriousness. She is really a worthy successor to George W. Bush," Pushkov noted in a tweet Saturday.

​The high profile criticism echoes that of policy analysts and ordinary people alike, who suggested that Clinton's statements were an indication of the candidate's nonchalant attitude toward the suffering of millions of people in the Middle East.

Clinton says she did a lot to help the Libyan people after Gaddafi's demise. Like by turning Libya into an ISIS recruitment camp? #demdebate

"WE DID A GREAT DEAL WITH THE LIBYAN PEOPLE AFTER GADDAFI'S DEMISE."

DOES THAT INCLUDE THE BUTCHERING OF BLACK LIBYANS!?