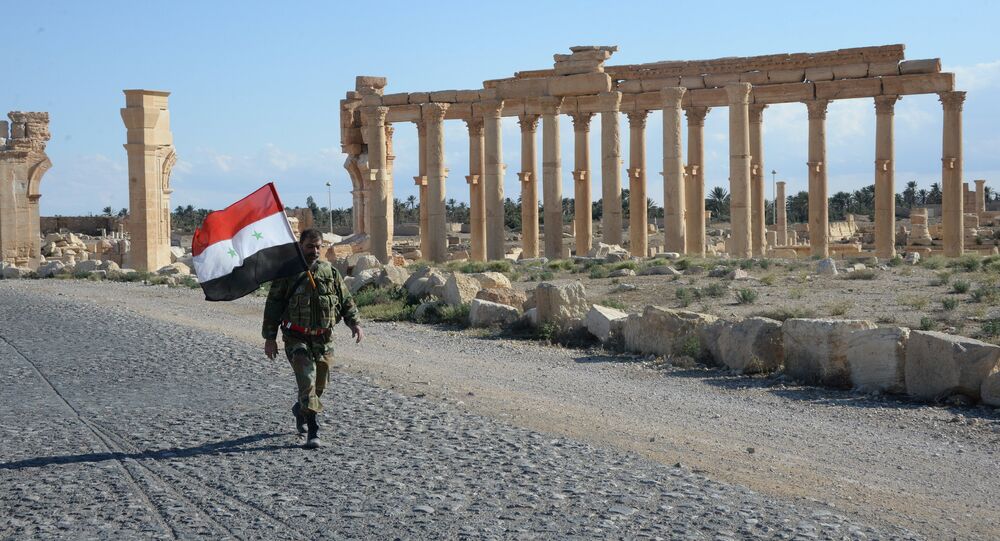 Advisor to Syrian President Bashar Assad, Bouthaina Shaaban, has slammed the West and praised the efforts of Russia and President Putin in particular on tacking terrorism in her country, following the recapture of Palmyra from militants, she also commented on Turkey’s involvement in Syria and its contribution to the spread of violence.

© Sputnik / Mikhail Voskresenskiy
Ancient Palmyra's Liberation Proves to West That Assad Fights for Civilization
Bouthaina Shaaban, advisor to President Bashar Assad, has welcomed the involvement of the Russian government and President Putin in particular in the fight against Daesh.

Commenting on Sunday’s telephone conversation between the presidents, when President Putin called Bashar Assad to congratulate on liberation of the ancient city of Palmyra, Shaaban said it demonstrated President Putin’s deep personal feelings regarding this historic treasure of civilization.

“I heard that President Putin told President Assad that there is oil in the world, there is coal, there are a lot of mines, but there is only one Palmyra,” she said in an interview with the Arabic branch of RT news channel.

“I wish all Western leaders had heard what President Putin said because David Cameron, the Prime Minister of the United Kingdom, for example, did not utter a word about the liberation of Palmyra.”

© Sputnik / Mikhail Voskresensky
Palmyra's Liberation Greeted With Praise Despite Silence of Officials
“This telephone conversation shows the difference between the Russian leader acting sincerely, based on real human impulses, actually doing what he says and the double standards of the West, which is against terrorism in word but in fact it does not fight it and does not want to be on the side of the Syrian Arab army which is at war with terrorism. It [the West] does not seek to take care of other people the way Russia does."

On the Role of Turkey

Bouthaina Shaaban also noted that since the very beginning of the conflict the country’s authorities were aware of Turkey's complicity and Ankara’s aggression against Syria.

“If we didn’t have a joint border with Turkey, which exceeds 860 km in length then all those terrorists streaming to Syria from all over the world couldn’t have got into it. Turkey has become a real safe crossing point for letting them into Syria and encouraging their arrival,” she said.

“We knew that caravans of oil trucks have been moving from the east of Syria into Turkey through Iraq and Kurdistan. They were probably then heading into Europe. The illicit oil trade, smuggling of antiquities and theft of equipment from our factories in Aleppo… Erdogan’s government is neck-deep in support of terrorism not only in Syria but all over the world.”

Bouthaina Shaaban said she hopes to live to the day when the world learns that the Turkish government has always been involved in the support of terrorism, illicit oil trade and antiquities smuggling, that it is this government who is spreading anxiety in all the countries of the region for the sake of its own interests, that Erdogan's sympathies lie “heart and soul” with the “Muslim Brotherhood, even though he wears western suits.

“His mentality is Wahhabi, and he is leading the world towards catastrophe until the world realizes that it should take a clear and decisive stance towards his government, the same it has towards Daesh and Wahhabism,” she concluded.

Russian Forces Get Set to Begin Clearing Palmyra of Mines

Historical Sites in Palmyra May Be Rebuilt Without Looted Values