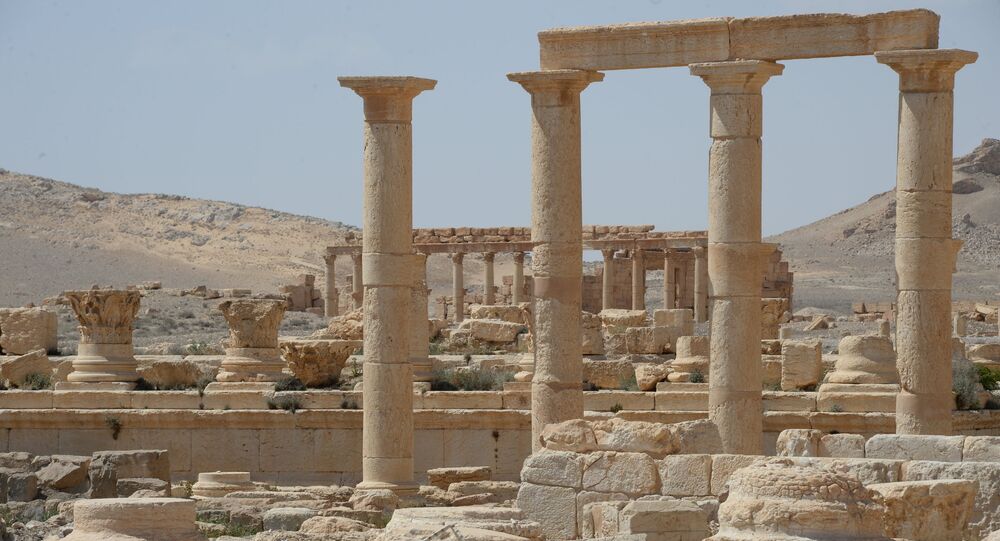 Even though the retreating Daesh terrorists blew up Palmyra’s most famous tombs and temples, some of the ancient city’s key sites, including a theater, the main street, walls, individual blocks of stone and four elegant gates have been left untouched, Syria’s top archeologist told Sputnik.

Maamoun Abdelkarim, Syria’s director of antiquities, has  inspired hope by reporting that the ravaged sites of the ancient city of Palmyra could be restored.

“We had feared that the amphitheater on the main street could have been damaged, along with the temple walls, but, thank God, everything is in perfect state,” he told Sputnik.

He added, however, that because the ancient theater had been turned into a prison by the jihadists it would take time to assess the damage.

Maamoun Abdelkarim said that what had happed to Palmyra was a tragedy and a major blow to modern civilization.

“If irreparable damage has indeed been caused to Palmyra, comparable to what happened in northern Iraq, then it would be a festering wound paining the hearts and minds of generations to come,” he noted.

In a resolution unanimously adopted on February 12, 2015, the UN Security Council underlined the member states’ obligations to take steps to prevent terrorist groups in Iraq and Syria from benefiting from trade in oil, antiquities and hostages, and from receiving donations.

“Today is our happiest day because the city has been liberated from terrorists and its historical monuments will be restored,” he said, adding that  hundreds of precious items from Palmyra’s museum had earlier been moved to safety.

Первый Канал (screenshot)
First Images of Palmyra’s Ancient Artifacts Damaged by Daesh Revealed (VIDEO)
An oasis in the Syrian desert, north-east of Damascus, Palmyra contains the monumental ruins of a great city that was one of the most important cultural centers of the ancient world.

In the third century AD, Palmyra was a prosperous regional center, which reached the apex of its power during the reign of Queen Zenobia, who rebelled against the Romans and established the Palmyrene Empire.

Despite centuries of Islamic rule in which the ruins of the city remained undisturbed, the extremist group Daesh decided to destroy much of the site, as well as countless others in territories which it controls.