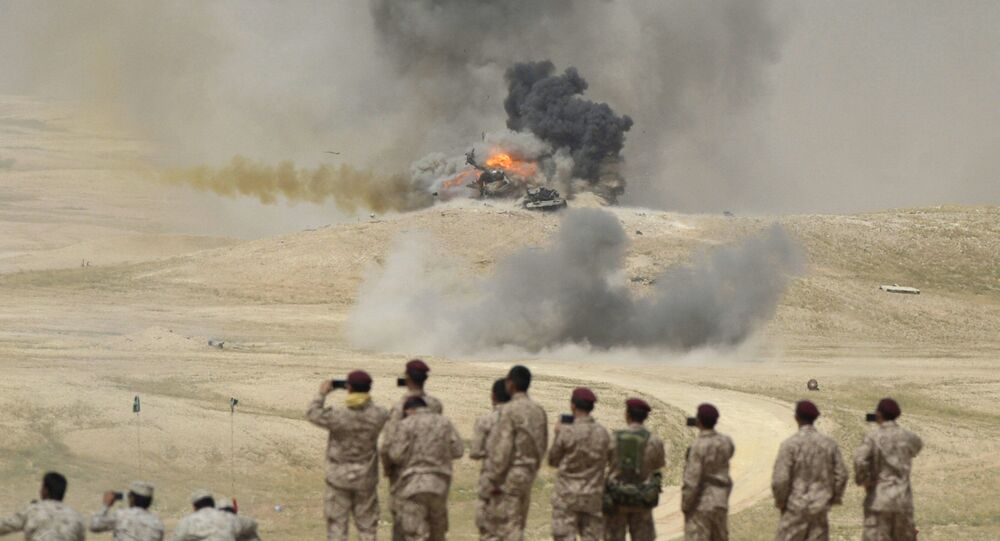 Syrian Gamble: What's at Stake for Turkey and the Oil Monarchies

In an attempt to analyze how durable the Syrian ceasefire might turn out to be, Czech military and security analyst Lukáš Visingr arrives at the conclusion that it is just a temporary pause in military actions, as Turkey and the “oil monarchies” have much at stake in the region.

“Petrodollar kingdoms are apparently beginning to play a very risky game that could even lead to a direct confrontation with Russia,” the expert suggests in his blog on the Echo24.cz news website.

© Sputnik / Michael Alaeddin
Keep Calm: Syrian Conflict is by No Means a Prelude to WW3
Perhaps, he suggests, this is why there is speculation that Riyadh is planning to strengthen its weakened position in this power game with an exceptionally strong trump card: by announcing that it has nuclear weapons.

“It is not actually a new topic, but surely not a coincidence that it was brought up again in relation with Syria,” he says.

The author further explains what interests these countries are pursuing in the region.

It is not only about their dominance in Syria, but about a dominant position in the Middle East and throughout the Muslim world.

Sunni monarchies are involved in a rivalry with Iran and it seems that they are currently losing. Only several years ago their positions in the region were quite strong, but since the “Arab Spring” a number of tremendous changes have taken root, wrecking a number of established alliances and launching new processes in the region.

© AP Photo / Lintao Zhang, Pool
Crossing the Gulf: China Sets Eyes on Middle East
The author notes that the truce in Syria came just at the very moment when the international community was expecting fierce fighting for Aleppo, the last big town which was under the control (at least partially) of the so-called “moderate opposition.”

Its fall would have led to a definite split in the opposition forces and to an extremely vital victory for the coalition of the Syrian government, Russia and Iran.

The Syrian Kurds from the People’s Protection Units (YPG), the main armed service of the Syrian Kurdish Democratic Union Party (PYD) have contributed to the siege of Aleppo and finally joined the coalition. This is not welcomed by Turkey, the main adversary of the Kurds, supporter of the Syrian Turkmens and sponsor of a number of opposition groups.

Many “moderate” factions of the opposition also enjoy the support of Saudi Arabia and other “oil monarchies” which have invested a lot into the defeat of President Assad and who now do not want to give up the bet.

In this way, the situation in the north of Syria could give them favorable consideration of an armed intervention in favor of their “protégés.”

© REUTERS / Kayhan Ozer/
Troublemakers: Ankara, Riyadh Envision the Creation of New 'Wahhabi Empire'
Besides, Visingr reasons, by withdrawing of its forces from Iraq, the US has demonstrated that it no longer has any intention to get as actively involved in this turbulent region as it was before. Washington is attempting to improve its relations with Iran through the nuclear agreement with Tehran regardless the fact that it causes friction in its relations with Israel and the Arab countries.

And while the regional powers (mostly the US allies), be it Israel, Turkey or Saudi Arabia, regard the above as a potential threat, they apparently also interpret it as a new opportunity.

As US is backing off from the Middle East, on the contrary, Moscow and Beijing are expressing more and more interest in the region.

© AFP 2020 / Saul LOEB
An Unbearable Burden: Washington at Pains to Resolve Numerous Regional Conflicts
Why shouldn't the regional powers fight for their “place in the sun” then? This has already been demonstrated during the intervention in Libya, where the US had an unusually limited participation, while the Gulf monarchies sent unexpectedly strong contingents.

Therefore, the expert suggests, there is still the possibility of a ground invasion into Syria by Turkey and Saudi Arabia, which could lead to confrontation with Russia.

In addition, he adds, Moscow has already unofficially warned both Riyadh and Ankara that while considering the invasion into Syria, the two should not forget that Russia is a nuclear power.