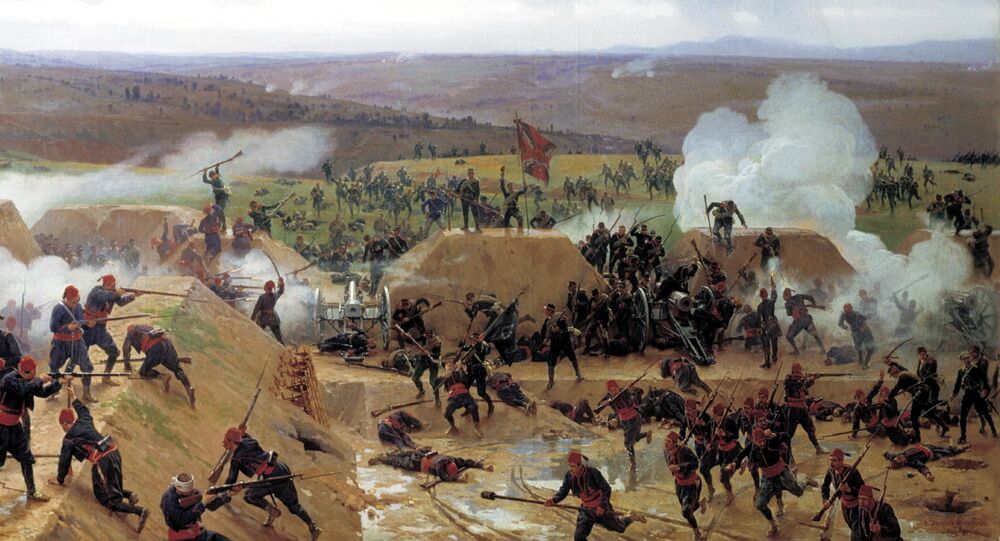 Wrong Train to Damascus: Will Erdogan Catch the Last Car?

Russia and Turkey were involved in the longest series of military conflicts in European history: they lasted between the 16th and 20th centuries and Russia has won the overwhelming majority of these 12 wars; a Serbian political analyst attempts to understand if a thirteenth is looming and what decisive factors could lead to it being unleashed.

© CC BY 2.0 / DVIDSHUB / Re-enlistment on top of Alexander's Castle
Always on the Wrong Side: US Vet Questions Military's Muddled Loyalties
According to a Serbian folk saying, “when you enter the wrong train, then all the stations are incorrect.”

This wisdom could be applied to the relationship between the Western countries and Russia, primarily to the one between Russia, Turkey and the US, Serbian political analyst Bojan Bilbija writes in his article for the Serbian online newspaper Politika.

If one would assume that all the three are already in the wrong wagon, then the prospects of a thirteenth conflict between Moscow and Turkey transpiring are much more likely than widely anticipated, the journalist says.

However the unleashing of the one depends on several key factors, he assumes.

The conflict between Ankara and the second most powerful army of the world would be completely irrational without the direct support of Washington, the author reasons.

© REUTERS / Kayhan Ozer/Pool
Is Ankara Trying to Derail Syria Truce to 'Drive Wedge Between US, Russia'?
“In reality, the Russian armed forces have at least three to five times quantitative superiority above Turkey in every aspect,” the author says.
Aside from this quantitative advantage, Ankara and NATO should be even more concerned about the number of advanced weapons systems Russia has in its possession, which the Turks will not be able to get for a long while, he adds.

However what is it that could give Turkey the hope?

The first option is an assertion that a “weakened" Russia does not have enough economic strength to power a large-scale conflict, and that a “sharp decline in living standards” within the country could lead to the overthrow of the country’s authorities, the author suggests.

However, he goes on, one should keep in mind that the Russian economy and state budget are regulated in such a way that they accumulate significant reserves and provide savings options without major cuts to the country’s social policy and military investment.

© AFP 2020 / JACQUES DEMARTHON
Is the US Turning On Erdogan?
Russia still has a noticeable trade surplus and its huge infrastructure projects, such as the 19-kilometer bridge to Crimea and the construction of monumental stadiums for 2018 World Football Cup, show that its financial flexibility causes no doubts.

The country’s gold and foreign currency reserves “show no tendency of melting,” the author further suggests, which proves that “even if there was a sudden increase in military spending — which in recent years has already been enormous and is estimated to be hundreds of billions of dollars – it would be durable for the Russian economy in the medium term.”

The second option for Erdogan, the political analyst says, is to involve NATO in the conflict with Russia. This is also a very controversial point, he suggests, as in this case Moscow would have to be the first to attack Turkish territory, which would be very difficult, given the recent death of a Russian pilot whose bomber was downed by Turkey in Syrian airspace.

© REUTERS / Jonathan Ernst
Breedlove: Risk of Turkey-Russia Confrontation 'Remains Credible'
In such a case, NATO would be backing up Turkey’s aggression rather than its defense.

Given all the above, Erdogan can only rely on what US foreign policy would bet on: cooperation with “unreliable” Putin, which will lead to a prolonged ceasefire and the de-escalation of the warmongering rhetoric of the American hawks, or on discrediting the Kremlin’s “good intentions” and further insisting Syria's ceasefire is a failure out of fear of Moscow maintaining tight control over the country?

“In case the latter option prevails, Erdogan will not miss the opportunity to catch his wrong train to Damascus,” the author finally states.