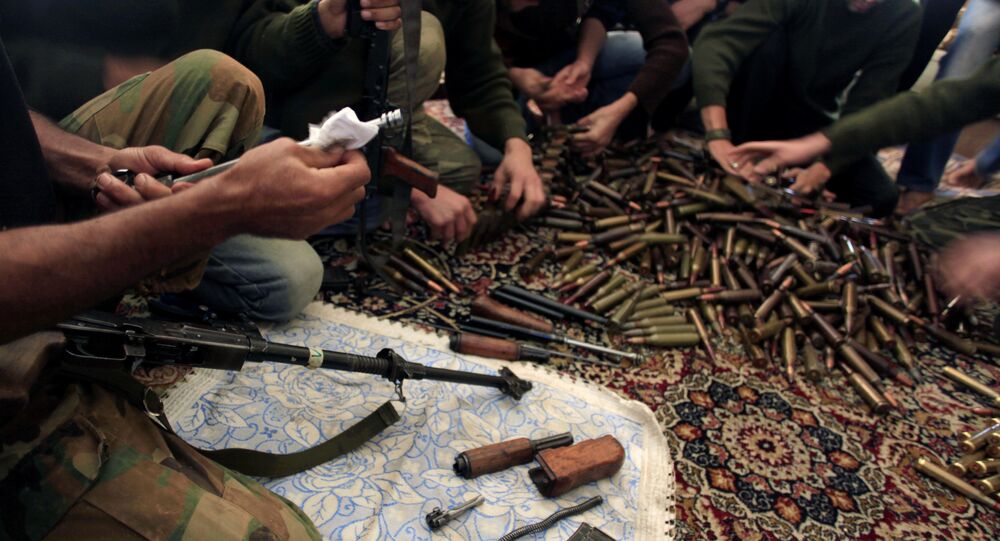 US-backed Proxies Use Ceasefire in Syria to 'Regroup, Rearm and Prepare'

The cessation of hostilities in Syria almost certainly does not mean the end of the Syrian war, as US, Turkish and Saudi proxies are using the timeout to regroup, rearm and prepare, according to former MI6 agent and EU foreign policy adviser Alastair Crooke.

© AFP 2021 / LOUAI BESHARA
In Full Control: Whatever Happens Next in Syria Will be Decided in Moscow
The Syrian ceasefire deal, brokered between the US and Russia, almost certainly will not last long and definitely does not mean the end of the war on the ground, Alastair Crooke, former MI6 agent, who was Middle East advisor to Javier Solana, High Representative for Common Foreign and Security Policy of the European Union (CFSP) from 1997 to 2003, said in a lengthy interview with the RT news channel.

The British diplomat analyzed the possible intentions of the parties of the deal.

“And one of the intentions is to have a break, a pause, I think, so that your own proxies — the American, Turkish, Saudi proxies — can regroup, can rearm and prepare,” he therefore suggested.

“In a sense, this is a timeout, which is why I said that I don’t think this is the beginning of the end. I think there is another chapter in this, and what we are going to see and why are they doing this, is because precisely they want to rearm, to push back the rapid advance that is taking place across Syria of the coalition forces led by Syrian army, and to stop that progress, in order to give them position to continue their negotiations, in order to have something in their hand to negotiate with.”

At the moment, Crooke explained, for the rebels, the negotiating hand is vanishing day by day and if the Syrian forces reach Raqqa, they will have almost nothing.

© Sputnik / Dmitriy Vinogradov
Run, Daesh, Run: Syrian Army Gains Control Over Strategic Heights in Raqqa Province
Their major purpose is stopping the government forces getting to Raqqa, because then what’s there to negotiate about? The negotiations are taking place on the ground, in the battlefield, Idlib and Aleppo in the north of Syria, he suggested.

The Syrian government forces have already established control of strategic heights in the Raqqa province.

The diplomat however explained that actually, in a certain sense, it’s not just a race for Raqqa, it’s a race for both Raqqa and Mosul, because the government forces need to take both, and “Turkey is very anxious to take Mosul because they always had a claim that Mosul was part of Turkey, and American forces would like to take Mosul.”

“It would be very important if the non-American, the non-Turkish forces can take both Raqqa and Mosul. It will end the idea of creating a wedge in the Middle East of a Sunni state that is under the influence of Turkey and Saudi Arabia and acts as block between Iran and the Mediterranean and between Iran and Syria,” he explained.

© Sputnik / Dmitry Vinogradov
Syria Talks: How Russo-Syrian Advance May Change Geneva Agenda
Crooke suggested a further aim is in “trying to create circumstances where they can blame Russia and Iran for in fact continuing to fight and to bomb what they would describe as “moderates”, but it would be groups involved with the radical jihadists.”

The former MI6 agent also pointed out that, interestingly enough, those who are fighting in Syria, are, in fact, different US-backed groups fighting each other.

“It’s clear that there are different elements within America. We’ve seen that the Defense Department had quite a different position from that of the CIA, and so, at the moment, what we are seeing in Idlib, for example, is that the American-supported Syrian Kurdish groups are actually fighting some of the groups that the CIA have trained. So you have American supported groups fighting American supported groups in the area around Aleppo. So yes, there are differences in the American administration in that area,” he said.