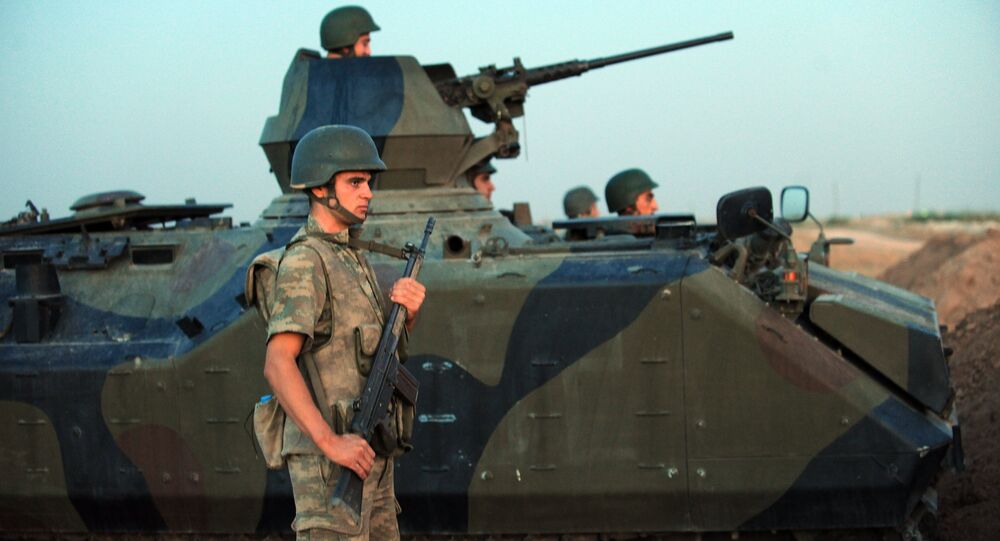 Turkey is preparing to build a multi-purpose military base for its air force and navy in Qatar. Alongside the US, Ankara will have site for military deployment in the small Gulf nation.

© AP Photo / Uncredited
Turkey Announces Plans to Station Thousands of Troops at New Military Base in Qatar
As a result, Turkey will join the club of countries which currently regulate the security mechanisms in the region, Javad Heyran-Niya wrote in his article for the Center for Scientific Research and Middle East Strategic Studies.

Today with permanent US and British bases in Bahrain and French military facilities in the UAE, Turkey is going to follow Washington’s example, establishing a base in Qatar.

No doubt, Turkey’s direct involvement in fixing Middle East issues was authorized by both the US and NATO. They are not ready to raise the level of cooperation with the Gulf Cooperation Council, including signing a collective security agreement. At the same time, bilateral agreements between the US and separate Gulf nations accommodate their mutual interests, according to the article.

One can learn from history that Qatar should be grateful to the Turks. Back in the 19th century, the Ottoman Empire helped Qatar build its own national identity, different from Saudi Arabia. What is more, Turkey and Qatar have similar approach to terrorists groups and such movements as the Muslim Brotherhood.

© Sputnik / Alexei Nikolsky
Is Qatar Changing Course on Syria?
Qatar has long opposed Saudi Arabia playing the role of "big brother" in the council. This is why Doha has been seeking for a more active role in the regional security mechanism.

"One of the main reasons why Qatar singed the agreement with Turkey is to expand and diversify its security tools," the author wrote. Such an agreement is usually based on the principle of collective defense.

In fact, the agreement proves that Turkey and Qatar are closely cooperating in politics and joint defense, according to the article.

The initiative, according to the article, also proves that the US has intensified the role of its Middle East allies in the field of collective defense. Washington’s pivot to Asia does not presume that US troops will be withdrawn from the Gulf. The point is that the US wants to share regional security costs with its allies.

"The British military base in Bahrein, a French base in the Emirates, and a Turkish one – in Qatar – they are all parts of US strategy to intensify the role of its allies to improve the security environment in the Gulf region," the author wrote.

The current US strategy in the Middle East is reminiscent of the Nixon-Kissinger doctrine in the Cold War era. Shortly after the end of war in Vietnam, Washington had neither the willingness nor the resources to deploy troops to other regions. Instead, the US used its regional partners like Iran or Saudi Arabia to pursue and secure its interest in the Middle East.

© AFP 2021 / AHMAD AL-RUBAYE
Washington Has 'Neither the Wisdom nor the Will' to Fix Middle East Issues
A Turkish military base in Qatar may be considered hostile by Iran, as a sign if Turkish support for the Gulf council. On the other hand, many analysts said, the situation can be seen through the prism of improving ties between Iran and the West, so a Turkish base in Qatar would not be a threat to Tehran.

"It is clear that currently the security regime in the Gulf cannot protect all the nations, while Iran and Iraq are totally excluded," the article read.

A Turkish base in Qatar is unlikely to contribute to a versatile security system in the Gulf region, and at the same time it will not be a threat for Iran.
The region needs a consistent security system that will not involve foreign military forces and will be based on cooperation between regional nations, the article read.

The current security regime is built on the balance of power, but it is unable to maintain stability and order in the long-term perspective.

"It is more like a zero-sum game. Within the existing regime, each player is skeptical about cooperation, seeking to strengthen its own capabilities and to weaken its rivals," the author wrote.

Turkey to Build Second Foreign Military Base in Somalia

End of Erdogan’s Power Grab? Turkey May Be the Middle East’s Biggest Loser