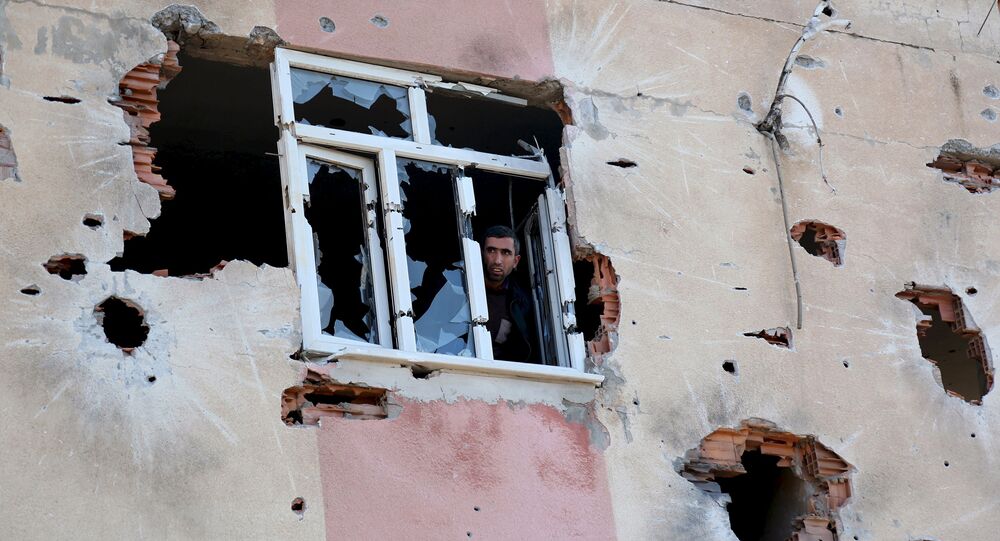 Dozens of Kurdish fighters and several Turkish soldiers have lost their lives in bloody clashes in Turkey’s southeast this week, and the shadow of civil war is increasingly seen day by day.

Increasingly, signs that ongoing clashes between Turkish security forces and Kurdish fighters may soon turn into a full-scale civil war, with much of the Kurdish population involved, have caused deep concern.

PKK co-leader #Karayilan says; This is a civil war and Turkish/#Turkey regime have declared war on Kurdish nation. pic.twitter.com/g8jfTr26Cf

​Ankara’s hardline politicians and Turkish nationalists across the country are pouring oil onto the flames with violent rhetoric.

“The operations carried out by the Turkish Armed Forces, gendarmerie and police will continue in the region in a steadfast manner until public security is established,” a recent statement by Turkey’s General Staff reads.

Being a refugee in your own homeland… #Diyarbakir, the Kurdish capital, under heavy #Turkish military occupation pic.twitter.com/4RWcYizWaE

​Over a hundred fighters from the notorious Kurdistan Workers’ Party (PKK) have been killed in action in the south-east province of Sirnak this week, according to Turkish media. In a full-scale military operation launched on Tuesday, two government soldiers were killed while 23 others, including members of the police, were injured.

This course of events is what many have been warning against.

“When we see these moves, we will know that Pandora’s Box has been opened and we can expect that both sides are heading to a level of violence that could become a civil war,” Metin Gurcan, a Turkish analyst, wrote for Al Monitor earlier this week.

Before the “anti-PKK” operation, as the Turks call their military actions in Cizre, Silopi, and other spots, both PKK and the government forces had been telling civilians to leave the area or go into hiding. Now, peace in this part of the Middle East looks a lot like war.

​“Semsettin, 45, said his family in Silopi woke up on Wednesday to the sound of gunfire and went down to their basement to hide,” BBC reported on Thursday. “As their house is the only one in the area with a basement, 25 neighbors have joined them in the 3-4 square meter room. ‘There is no electricity, it’s cold and the children are suffering. There is no baby food or milk,’ he says.”

​After two days of military operations in the area, Turkey’s Interior Minister Efkan Ala stated that the military and police had seized tons of explosives and thousands of weapons from Kurds, according to Anadolu Agency.

“Security forces seized 2,240 weapons, 862 of which were heavy and long-barreled weapons, almost 10 tons of explosives and some 10,000 Molotov cocktails,” the minister specified.

Kurdish rebels reportedly have not only dug trenches and built barricades in urban areas, but also modified their combat strategy to be effective against well-equipped government military forces.

Clashes Between Turkish Security Forces And PKK In Towns Of Cizre And Dêrik Turkey https://t.co/SPE5BL5zzz

​​“In the past, veteran PKK fighters reinforced young urban fighters by using a strategy of ‘come-coordinate-depart,’ but now the strategy has become ‘come-stay-direct,’ Metin Gurcan of Al Monitor explained. “If these hybrid forces of veteran PKK fighters and young YDG-H militants in cities are equipped with advanced anti-tank missiles such as Milan, Kornet and TOW and shoulder-fired ground-to-air missiles that could change the entire nature of the anticipated clashes.”

​The regulation of financial activities in Kurdish-dominated areas was reportedly taken over by the PKK in advance, in expectation of a long conflict.

Experts point out that a full-scale war with increased civilian casualties – or, as NATO is used to cynically label it: “collateral damage” — is likely to lead to a civil war over the large areas of Turkey that have a Kurdish majority. Kurds account for some 20% of the total population of Turkey.

'The PKK is NOT designated as a 'terrorist' organisation by 156 of the world's 196 countries.' They should use this in their news articles.

​Around 10,000 troops and police officers are involved in a nationwide military operation tasked with putting down a recent Kurdish Workers Party (PKK) independence insurgency.

the brutality of the Turkish state in Kurdistan #TwitterKurds pic.twitter.com/nW3MkQr5HK

​A total of 180 police, military and civilians have died in PKK attacks following terrorist acts, claimed by the Islamic State (Daesh in Arabic), that killed 33 Kurdish activists in July and the murder of two police officers claimed by the PKK.

THIS IS NOT SYRIA. This is Turkey's unreported war against the Kurds in Diyarbakir. #TwitterKurds UNREPORTED! pic.twitter.com/ZH4e38Lk0y

​Turkey has stepped up its air campaign against PKK targets in southeastern Turkey and northern Iraq.