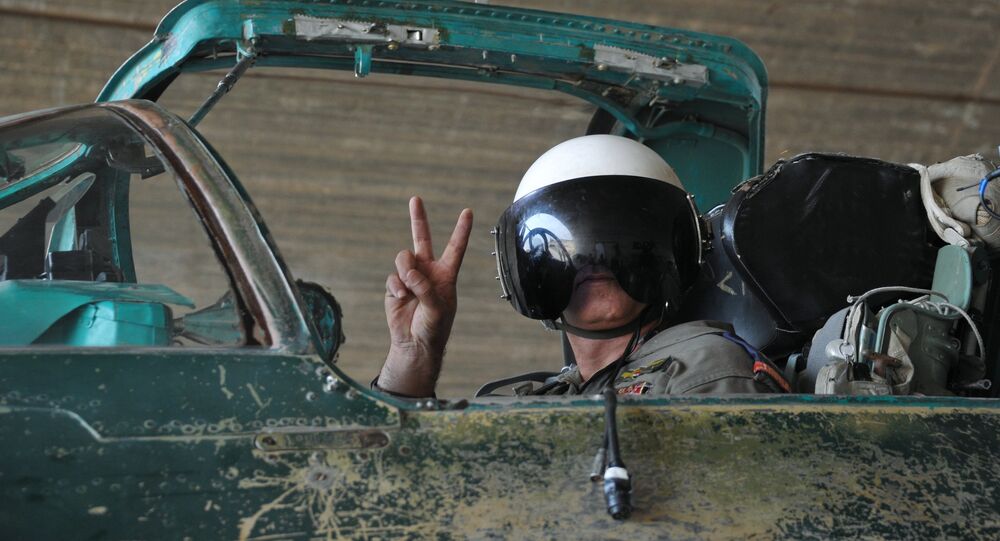 Syria operates the legendary Soviet-era Mikoyan-Gurevich MiG-21 and MiG-23 fighter jets but pilots say that these aging warplanes are reliable and extremely efficient.

© REUTERS / Brendan Smialowski/Pool
This Weekend's Vienna Summit: Who's a Terrorist, and Who's Not?
Russian journalists recently managed to take a close look at the Syrian Air Force in action at the Hama base located near the city of the same name. The airfield is of strategic importance.

Military aircraft that operate from the Hama airbase carry out missions all over the country: in the north, covering the provinces of Idlib and Hama, as well as in the east, including the capital of the self-styled caliphate in Raqqa and the besieged Deir ez-Zor airfield, and in the south where the world famous Palmyra is situated.

Militants have repeatedly tried to capture the Hama airbase. They often shell the area. While at the base, Russian and Syrian journalists heard a blast and saw black smoke. Syrian officers acted like nothing happened but this is how a mine or rocket explosion looks like.

Syrian soldiers collect home-made mortars and pistols which militants use to attack the airfield and display these "presents" at the entrance to the base.

© AP Photo / Virginie Nguyen Hoang, File
The Tables are Turning: Syrian Army Pushes ISIL Out of Key Areas
Hama is one of 15 military airbases in Syria. Five of those are in the hands of militants. One more base, Deir ez-Zor, is operational but it has been besieged for three years. The Kowaires military airbase near Aleppo is a scene of fierce fighting between militants and the Syrian Arab Army (SAA).

Earlier this week, Damascus-led forces managed to free it. The Hmeimim airfield has become famous for hosting Russian warplanes.

The Hama airbase dotted with artificial hills used as hangars looks like a Hobbit village from The Lord of the Rings. The Syrians don't need to construct heated hangars in this warm climate. They keep and repair planes under an earthen shed which can nevertheless withstand shelling.

A local pilot, who calls his aircraft "a beloved one," praised the Mikoyan-Gurevich MiG-21 as an extremely reliable, powerful and safe machine. He carries out two – four sorties per day depending on the tasks he has to fulfil.

"We fly on a mission after we receive intelligence data on the location of militants, their ammunition depots, military equipment or mortars," he explained. "Our main task is to get through to the takfiris and Wahhabis to stop the destruction of our country."

Syrian pilots are safe if they fly at altitudes higher than 4.5 kilometers but they often risk their lives at lower altitudes to for greater precision. "Our pilots are true heroes," local commander noted.

© Photo : Russian Defense Ministry
International Journalists Impressed by Hmeymim Airbase in Syria
On November 4, a Syrian plane from the Hama airbase was shot down while flying at a low altitude over an area held by the rebels. The pilot managed to keep the aircraft from crashing as long as he could but he did not make it to the airfield. Syrian soldiers later found the debris and the body.

Syrian pilots always coordinate their counterterrorism efforts with Russian counterparts through a joint information sharing center. The targets are allocated between Russian and Syrian pilots. If a Russian and a Syrian pilots operate in the same area, they fly at different altitudes.

Each target is carefully examined so that civilian infrastructure would not get hit. When the Hama airbase receives a target, Syrian pilots compete with each other over who will fly the mission.

Forget Russian Campaign in Syria: ISIL in Egypt Has Other Goals in Mind