This Weekend's Vienna Summit: Who's a Terrorist, and Who's Not? 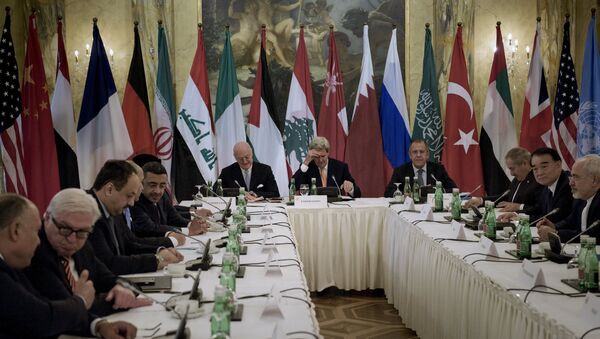 © REUTERS / Brendan Smialowski/Pool
Subscribe
One of the main points of focus when world powers gather in Vienna this weekend for talks about post-war Syria will be to agree upon a list of terrorist groups so as to determine whom to include in future negotiations.

There is expected to be much contention over classifying groups operating in Syria as either terrorists or legitimate opposition groups.

British Foreign Secretary Philip Hammond predicted a lot of "horse trading" in compiling the list, but said virtually everyone, including the United States, is likely to end up with some allies on the list who they have to sever ties with.

"In my judgment, people we should be talking to will include people who have a vision for the future of Syria that is different from ours, a vision that we will not agree with," Hammond said in an interview with The New York Times.

No Syrian groups have been invited to the talks in Vienna on Saturday, just as none attended the first round two weeks ago.

Hammond predicted Saudi Arabia to fight hard against the inclusion of some Sunni Islamist factions, like Ansar al-Sham, which the Saudis have financed for years.

Turkey is likely to lobby for the inclusion of the Kurdish YPG, which is already recognized as a terrorist organization by the Turkish government. However, the YPG is backed by the United States and Russia, who will likely object to banning one of the key opponents of Islamic State in northeast Syria, Antiwar.com reported.

Another US ally that might be excluded from talks is the faction of the Free Syrian Army (FSA) that operates around Hama and Idlib, which has been fighting alongside al-Qaeda.

The standoff over the terrorist list comes on top of the disagreements that remain on the future of President Bashar Assad. Russia and Iran are open to the possibility of Assad remaining in power, which the United States, Great Britain and their Persian Gulf allies oppose.

000000
Popular comments
Guy in the bottom left of the photo is explaining to Steinmeir that most people don't have bourbon for breakfast.
jas
12 November 2015, 06:48 GMT
000000
The crimes all around us are police matters. The courts have been neutered and looting has been allowed to go on essentially since 911. The crime is wire fraud, financial fraud, mass murder, insurance fraud, and colluding to overthrow a sovereign govt (s) for financial gain.