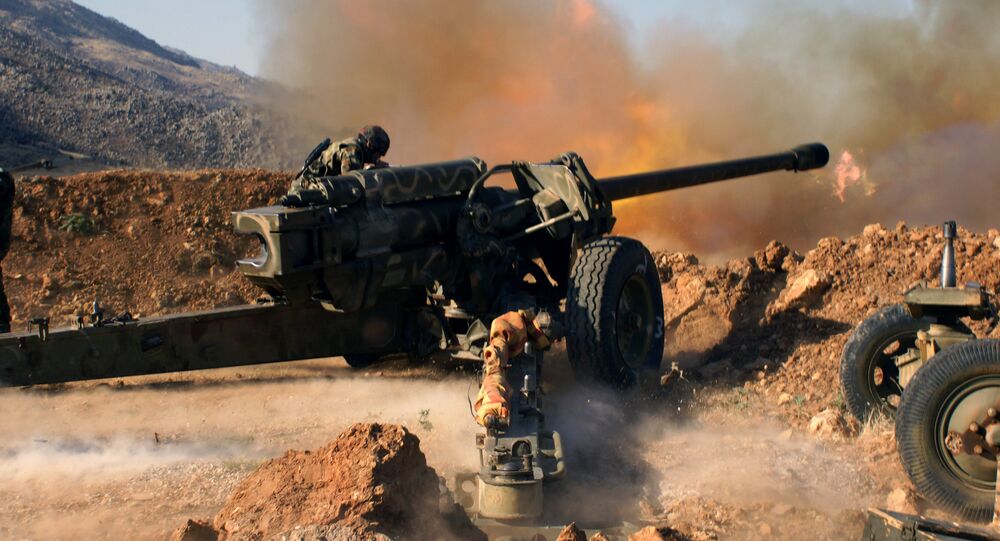 Western media outlets cannot help fabricating new sensational stories about Russia's counter-terror operation in Syria, with the latest reports claiming that Iranian and Cuban military forces have joined the Russo-Syrian alliance in order to smash ISIL in the region.

© Sputnik / Alexandr Kryazhev
McCain, Clinton, Brzezinski Banging War Drums Over Russia's Syrian Strikes
According to Western media outlets, over the past two weeks Iranian Revolutionary Guards have amassed a substantive military contingent at the Latakian base in order to join the Syrian Army's offensive against ISIL in Idlib province.

First, the Associated Press, and then the UK-based Syrian Observatory for Human Rights reported about 1,500 Iranian troops having arrived in Syria.

"It goes without saying that cooperation between Iran, Russia, Iraq and Syria, including information exchange and joint military efforts aimed at eradicating the Islamic State might prove effective. Iranian authorities have repeatedly claimed that the Islamic Republic is ready to provide necessary support to conduct such actions. Still, I must admit that the Syrian Army has the skills and potential for carrying out ground operation on their own, without foreign assistance. However, Iran is ready to continue to provide the Syrian Army with further consultations," Zanganeh elaborated.

However, it seems that Western news media could not get enough of it. Incredible as it may seem, they even started breaking the news of an upcoming Cuban offensive against the Islamic State in Syria.

Citing the University of Miami's Institute for Cuban and Cuban-American Studies and an anonymous US official, Western mainstream media outlet Fox News has told its viewers that General Leopoldo Cintra Frias, heading a group of Cuban military personnel, has arrived in Syria to join the Russia-led counter-terror operation.

CUBAN TROOPS? IN SYRIA? TRAINED IN RUSSIA? WITH IRAN? WTF @BuckSexton? Got any background on this? We truly live in bizarro world…smh

"It's pure lunacy. It is as if they were claiming that Russia had sent its troops to Madagascar to protect lemurs," the diplomat from the Cuban Embassy in Damascus told Sputnik in a phone call categorically denying the news of alleged deployment of a Cuban military contingent in Syria.

Indeed, the only news that could top the announcement of the Russo-Cuban offensive in Syria would be if comandante Ernesto "Che" Guevara arrived in Syria himself.