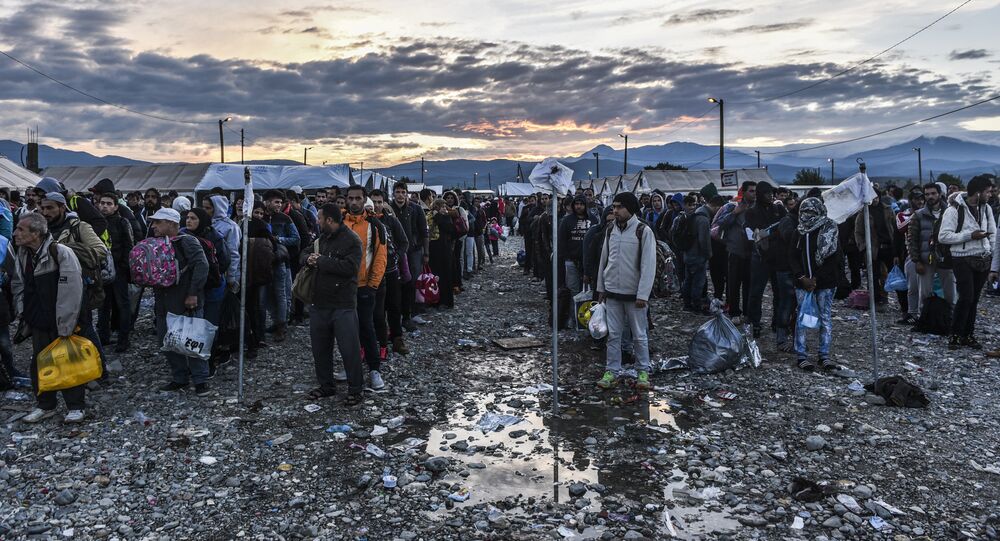 What forces are implicated in the Iraqi conflict? What is left after Saddam Hussein’s ouster? How do migrants survive in Hungarian refugee camps? Sputnik encountered a man who claims he knows answers to these and other relevant questions.

© AP Photo / Petr David Josek
Iraqi Refugees Forced to Make Painful Choices About Whether to Stay in Europe or Return Home
Vasily Raksha — Some 15 years ago an ambitious young Iraqi man was burning with a desire to study. His family had to tighten their belts saving money for an education but they unanimously agreed to bear this burden: not only was it important to help the boy make his way in life; all of the family members cherished the hope that after several years he would become a pillar of support for them.

And in 2002 the dream finally came true: to the joy of all his family, the Iraqi entered a university in Romania aspiring to become a marketing specialist. Everyone was happy.

But just a year later all dreams for a  promising future were shattered: the US started the Iraqi campaign.

“After it had happened, I could never return”, 38-year-old Baz recounts. “What did they do? Did they bring freedom to Iraq? There’s chaos instead. During Saddam Hussein’s times Iraq was a big power. But forget Saddam, don’t focus on him, focus on facts: we were strong, we had oil, everything. Then everything collapsed.”

Baz never returned home. Thirteen years ago he found himself in a situation closely resembling that of thousands of Iraqis escaping from bloodshed and chaos in the present day. He married a Hungarian girl who studied with him at university, and they moved to Budapest. Now he sells trucks. The ongoing violence brought back the distant memories of his painful past, and Baz started helping refugees.

And they desperately need it. Baz explained that refugees are not supplied with food but receive a social benefit amounting to 20 euros per week. Saying that such a benefit allows an asylum-seeker to make ends meet would be exaggeration, according to him.

As for relations between the refugees and locals, Baz elaborated that there is no standard answer: there might be some thieves among the migrants, and there might be cases of intolerance from the side of the local population.

Refugees want to obtain the right to bring their families from the countries of origin, Baz said. Are they going to come back to the Middle East when peace finally settles there? Yes, they do, they dream about seeing their homelands free from bloodshed again. They are obsessed with rejoining with their families, but they want to take them to Europe rather than make the first step and return home. They are afraid of and emaciated by never-ending wars.

Speaking about his own homeland, Baz said that Iraq is cornered between the devil and the deep blue sea. He blamed the leading countries for fueling the conflict in the Middle East, particularly in Syria, saying  third countries seeking profit arm warring groups, which in his opinion, cannot ease tensions.

Buz challenged a suggestion that the sole annihilation of ISIL may bring peace to Syria, stressing that it will be insufficient to iron out the extremely sharp internal contradictions in the country.