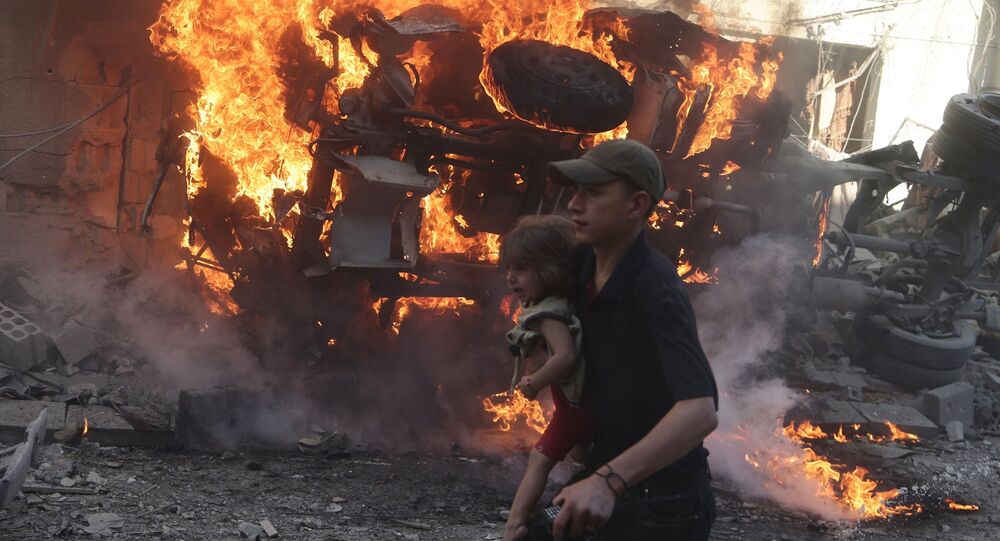 Forget US Airstrikes, Only United Ground Force Can Defeat ISIL

Iran and Russia could use their influence on the Syrian government to find a compromise between the conflicting sides in the civil war in order to unite their forces to fight the militants of the Islamic State, according to experts.

© AFP 2021 / BRENDAN SMIALOWSKI
ISIL Militants May Enter US Pretending to Be Syrian Refugees
MOSCOW (Sputnik), Alexander Mosesov — The airstrikes being carried out by the anti-Islamic State (ISIL) coalition led by the United States will not defeat the terrorist group as this can only be achieved by a united and well-armed front on the ground in Syria and Iraq, experts told Sputnik on Monday.

The Islamic State extremist group, which has proclaimed a caliphate on the lands under its control in northern Syria and Iraq, has so far withstood over 6,700 airstrikes by the international coalition formed by US President Barack Obama in September 2014.

Since that time, however, ISIL influence in the region has not waned. The Iraqi cities of Mosul and Ramadi as well as Syria's Raqqah and Palmyra remain under the yoke of radical Islamists. The Iraqi Armed Forces, Kurdish Peshmerga fighters, the Syrian Armed Forces and various groups opposed to Syrian President Bashar Assad are fighting ISIL militants but their operations are carried out separately on multiple fronts.

"Ultimately defeating insurgents requires governments to separate the insurgents from the general population. In Iraq and Syria, this means that there needs to be a fighting force on the ground that can take territory from ISIS [ISIL], occupies that territory, and holds on to it, preventing ISIL from returning," Simon Palamar, a researcher at the Centre for International Governance Innovation (CIGI), told Sputnik.

© Sputnik / Andrey Stenin
Syrian Army Repels ISIL Insurgents From Deir Ez-Zor Military Airfield
Vice president for policy and research at the Middle East Institute Paul Salem said that the military resources of Assad and the various rebel groups should be focused on fighting Islamic State instead of fighting each other. In order to achieve that, Iran and Russia could use their influence on the Syrian government to find a compromise between the conflicting sides in the civil war, the expert noted.

According to Salem, the resignation of Iraqi Prime Minister Nouri Maliki, who "alienated both the Kurdish and Sunni communities" was a positive development. The new government's attempts to rebuild trust between the communities was "a correct policy."

"A key component to defeat ISIL [in Iraq] is to have a political agreement to bring in elements of the Sunni opposition, to bring them into the government," Salem concluded.

"Air power can degrade the capabilities of a state but it takes a ground campaign to defeat it. In Iraq, ISIL has been pushed back on a number of fronts by Kurdish forces. In the chaos that is Syria, where there are over 1,000 competing 'gangs,' ISIL has no rival capable of pushing it back," James Gelvin, a professor and scholar of Middle Eastern history at the University of California (UCLA), said when assessing the military capabilities of ISIL' opponents on the ground.

Simon Palamar also noted that the Kurdish forces in Iraq and Syria "do not seem to have the numbers of personnel or adequate heavy weapons and munitions to engage in broader offensives" against the Islamist radicals.

"Right now, we have a situation where there are many armed groups that can conduct local, small-scale operations (and have the support of local populations)," the CIGI researcher said.

The experts believe that only a strong and consolidated anti-ISIL front can bring victory to the local forces and rout Islamic State with their idea bearing resemblance to the famous saying by Latin writer and author of moral sayings Publilius Syrus: "where there is unity there is always victory."