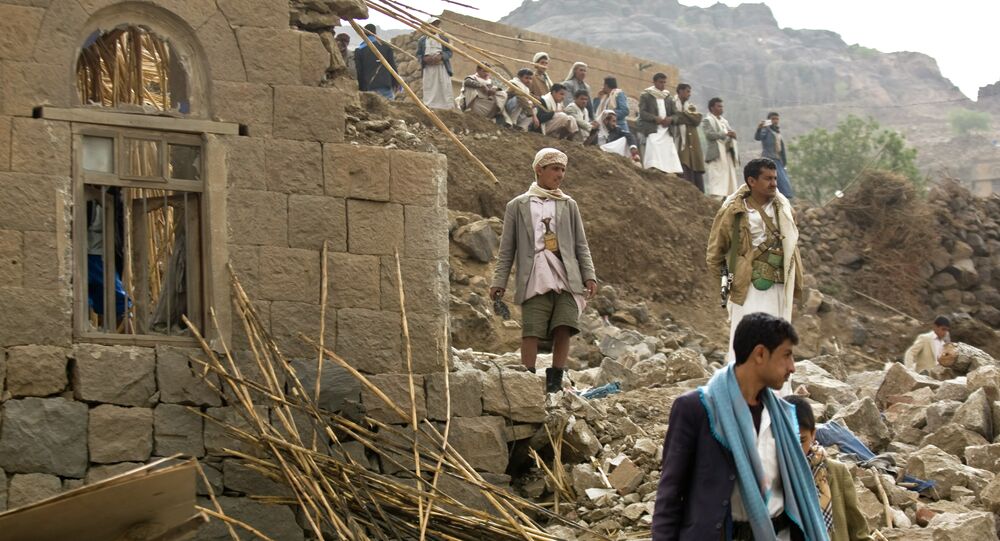 A member of Yemen politburo spoke to Sputnik Arabic telling that all citizens of Yemen are just waiting for the invasion of the enemy soldiers so that they can take blood revenge for killed sisters, mothers and children.

Fadl Al-Muta, a politburo member of “Ansar Allah,” spoke to Sputnik regarding the Yemen conflict.

© AP Photo / Wael Qubady
Red Cross Receives Permission to Send Surgeons to Yemen
“The military alliance of Arab States is killing women and children of our country. We would like to maintain normal relations with the Arab states and other countries around the world. But now we want to say that there is a limit to our patience,” Muta told Sputnik Arabic.

Regarding the ground operations, Muta said that the main reason why they still have not started a ground operation against Saudi Arabia is the presence of a number of destabilizing forces in Yemen, such as "Al-Islah" armed militants ‘Abd Rabbo Mansour al-Qaeda’ and ‘Ansar al-with Sharia.’

“Therefore, we must eliminate the internal threat before we start fighting a foreign enemy.”

He added, “We are waiting for a ground operation by the Arab alliance, in order to give an immediate retort and take blood revenge for killed sisters, mothers and children."

Yemen has been torn apart by a conflict between Houthi militants and forces loyal to displaced Yemeni President Abd Rabbuh Mansur Hadi. An international coalition led by Saudi Arabia has been carrying out airstrikes against the Houthis since March 26, following Hadi's request for military aid.

© AFP 2021
Houthis Describe Saudi Military Campaign in Yemen as Illegal Aggression
A military source told Sputnik earlier on Tuesday that at least six children were killed after the Saudi-led coalition fired missiles that hit a school in central Yemen.

The World Health Organization (WHO) published a report on the Yemen conflict, stating that a total of 643 people have been killed and 2,226 injured since the conflict escalated on March 19.

According to the report, over 334,000 people have been displaced while more than 254,000 have been registered as refugees as a result of violent clashes in the crisis-hit Arab country.