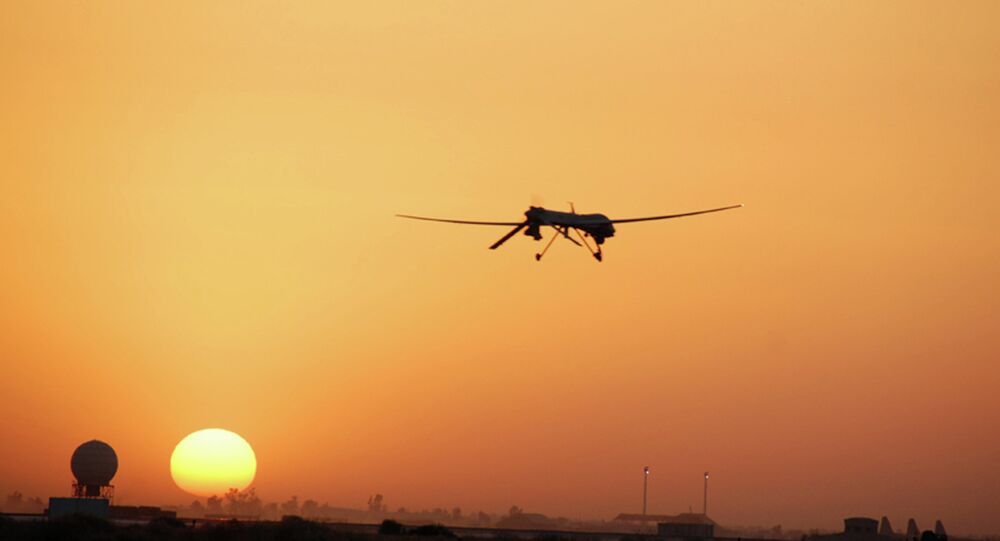 US Drone Downed in Latakia Spied on Syrian Army for ISIL: Analyst

Syrian forces brought down a US drone while it was spying on the military bases in order to pass on the information to the Islamic State militants.

A US drone was shot down over the city of Latakia in northwestern Syria. It was reported that the drone was observing the movement of government troops and trying to determine the location of the Army Staff, military expert Hassan al-Hasan told RIA Novosti.

© REUTERS / Pierre Albouy
Peaceful Resolution to Syrian Conflict Can Help Fight ISIL Threat - Envoy
On Wednesday night the Syrian military shot down a US drone flying in the suburbs of Latakia in the north-west of the country near the Turkish border. According to media reports, the scouting aircraft crossed the Syrian airspace from the sea. Later, the United States announced that it had lost contact with the UAV over Syria.

“This aircraft is high tech and has the ability to capture the movement of the Syrian army, its maneuvers and its command headquarters in order to identify its military secrets, in order to pass on the information to the terrorists,” said Al-Hassan.

Al-Hassan does not exclude the possibility that the downed drone may have been combat, "in that case it could have attacked any civilian or military facility." The destruction of the drone, according to him, proved the effectiveness of the Syrian army, which "is ready for any surprises."

© AFP 2020 / ALI AL-SAADI
Destroying Cultural Sites: Something ISIL and US Army Have in Common
Military experts said what happened in Latakia does not mean that the Syrian army had adopted a new air defense system. “To bring down a drone a conventional anti-aircraft guns or air defense systems can be used. What kind of weapon was used in this case will remain a military secret, known only to military commanders,” he added.

United States with the support of a number of allied countries began its combat operation against Islamic State in Syria. A similar operation started in Iraq back in August.

During the operation the US air forces conducted airstrikes on territory of Syria without the approval from Syrian authorities.