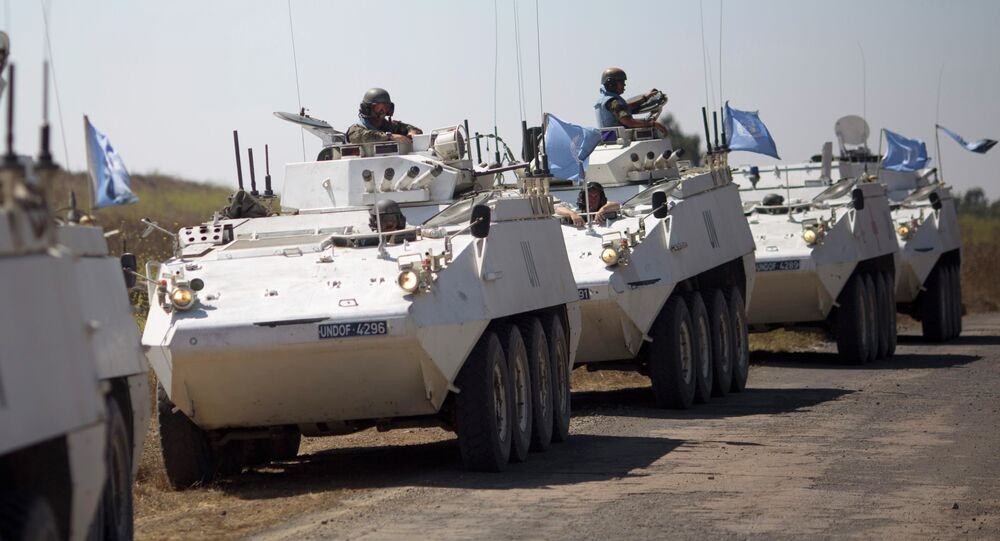 Israel began admitting a small number of Syrian fighters for medical treatment in northern Israeli hospitals in March 2013, according to reports.

"UN troops monitoring the 1974 ceasefire between Israel and Syria have witnessed interactions between members of the Israeli Defence Forces and the Al Nusra Front who have taken over a large part of the Golan Heights," the news site stated.

The reports, made available on the UN Security Council’s website, state that beginning in March of 2013, Israel began admitting Syrian fighters for medical treatment in northern Israeli hospitals. The UN Disengagement Observer Force (UNDOF) refuted Israel’s assertions that the contacts were with civilians who had reached the border independently. One report revealed that on September 15, a wounded man “was taken by armed members of the opposition across the ceasefire line, where he was transferred to a civilian ambulance escorted by an IDF vehicle.” Another for November 9-19 noted that UNDOF peacekeepers ““observed at least 10 wounded persons being transferred by armed members of the opposition from the Bravo side across the ceasefire line to IDF.”

© AP Photo / J. Scott Applewhite
US Strikes in Syria Directed At Khorasan Extremists, Not Al-Nusra: CENTCOM
Records from Israel’s Ministry of Health have revealed that so far about 1,000 Syrians have been treated at four hospitals in the north of Israel, among them fighters from the Free Syrian Army, Israeli news site i24news.tv reported.

i24 further noted that last month, Israel’s Druze minority staged a protest against the hospitalization of wounded fighters with links to the al-Qaeda-linked al-Nusra Front and the Islamic State in Israel. i24 explained that Israel’s Druze community, like the Druze communities in Syria and Lebanon, largely support Bashar al-Assad’s government in Syria, fearing what may happen to their community should Islamist rebels succeed in toppling him.

Asked by i24 if Israel has hospitalized fighters from al-Nusra and the IS, an IDF spokesman said that “in the past two years the Israeli Defense Forces have been engaged in humanitarian, life-saving aid to wounded Syrians, irrespective of their identity.”

Israel's online news site Haaretz explained that the Syrian army had sent a letter of complaint to UNDOF in September, claiming that the camp was a “base” for “armed terrorists,” and would be seen as a legitimate target for destruction if not taken down by Israel. The UNDOF replied that relocating civilians was not part of its mandates, urging that no attack be carried out, the UN Tribune explained.

Syria’s Ambassador to the UN has spoken out on numerous occasions against the supports Islamist radicals have received from neighboring countries. This past August he told Iran’s PressTV that Islamic militants had concluded an “undeclared alliance with Israel.” The ambassador had made similar comments in October about Saudi Arabia and Turkey, comments later substantiated by US vice president Joe Biden.