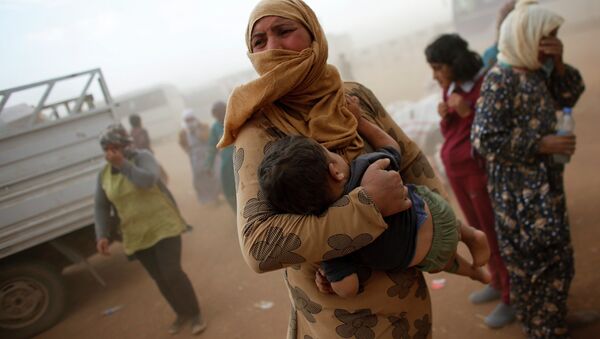 © REUTERS / Murad Sezer/Files
Subscribe
Amnesty International criticized the Gulf Cooperation Council and the European Union for the paucity of resettlement places they had pledged.

NEW YORK, December 5 (Sputnik) – Amnesty International criticized the world community for failing to help resettle 3.8 million Syrians, who have been forced to flee their country in a Friday report.

Amnesty International Criticizes EU Failure to Accept Syrian Refugees
"In total, more than 10 million Syrians, or 45% of the country's population are believed to have been forced out of their homes due to the conflict. Of those, 6.5 million are displaced within Syria and approximately 4 million people have sought refuge in other countries. Of this 4 million, 3.8 million – or 95% — are now in just five host countries: Turkey, Lebanon, Jordan, Iraq and Egypt," the UK-based human rights group said in a report titled "Left Out in the Cold: Syrian refugees abandoned by the international community".

"The six countries of the Gulf Cooperation Council (GCC) – Bahrain, Kuwait, Oman, Qatar and the United Arab Emirates – have pledged 0 resettlement places. Excluding Germany, the remaining 27 countries in the European Union (EU) have pledged a total of 6,305 places – which amounts to just 0.17% of the number of refugees currently living in the main host countries," the report said.

WFP Calls for Joining Syrian Refugee Food Aid Campaign
According to Amnesty International, in total, only 63,170 resettlement places have been offered globally to Syrian refugees, which is equal to "a mere 1.7% of Syrian refugees in Lebanon, Jordan, Iraq, Egypt and Turkey".

The human rights group called "for a global resettlement surge to relocate 380,000 Syrian refugees from the main host countries, by the end of 2016".

"This amounts to approximately 10% of the total refugee population in those countries. At least half should be resettled by the end of 2015," Amnesty International stressed in its Friday report.

The Syrian civil war began in 2011, following anti-government uprisings. Syrian authorities are fighting a number of insurgent groups, including Islamic State (IS) extremists. According to estimates by the Syrian Observatory for Human Rights, the Syrian civil war has taken over 300,000 lives.