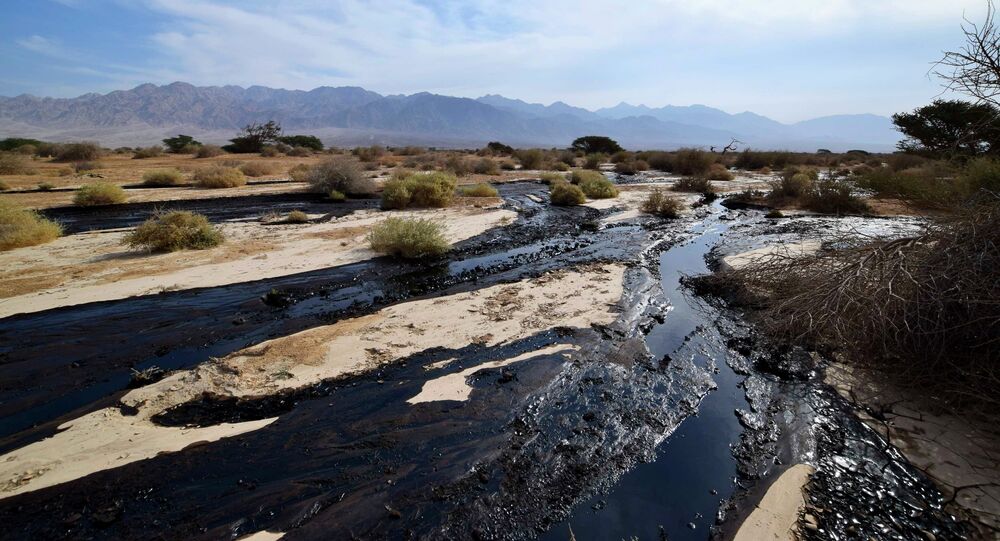 Israeli officials say that the oil spill is one of the worst ecological disasters in its history.

© AP Photo / David Vaaknin, Pool
Israel to Redirect Exports to Asia Due to Recession in US, EU
MOSCOW, December 5 (Sputnik) – A burst pipeline has led to millions of liters of oil leaking into a desert nature reserve in southern Israel, in one of the country’s worst-ever environmental disasters.

“Rehabilitation will take months, if not years… This is one of the State of Israel’s gravest pollution events. We are still having trouble gauging the full extent of the contamination,” an Environment Ministry official told Israel Radio on Thursday, according to Reuters. The spill has caused “serious damage… to flora and fauna,” Gay Samet added.

The Jerusalem Post reports that the rupture happened during maintenance work on the Eilat-Ashkelon crude oil pipeline overnight Wednesday. It resulted in millions of liters leaking into 200 acres of the Evrona nature reserve, which lies close to the country’s border with Jordan and is known for its deer population and douma palms. The Israeli Nature and Parks Authority told the paper that the deer and douma appear to have missed the oil slick, which has pooled in ravines, but that there is “no doubt that insects and other crawling animals have been harmed.”

© Sputnik / Maksim Blinov
Mystery Plane Makes Secret Trips Between Israel and Gulf State: Reports
According to Haaretz, emergency serviced stopped the flow after two hours, preventing it from crossing the Jordanian border, or travelling to the Red Sea resort of Eilat which lies 20km to the south of the reserve. However, it reported that in Jordan, large amounts of hydrogen sulfide were detected in the air around the port of Aqaba, and that dozens of people complained of breathing problems after inhaling fumes from the spill.

The recovery operation will require the suctioning of oil from the land, and removal of oil-contaminated soil. “It is important to extract as much oil as possible,” Dr. Gilad Golub, CEO of the Israeli state Environmental Services Company, told Haaretz, “But the most heavily polluted land must be removed immediately afterward. This land must be burned."

An investigation by Israel’s Environmental Protection Ministry is currently underway to establish the cause of the breach, which Haaretz reports happened in the course of pipeline maintenance work ahead of the opening of an international airport in nearby Timna.

Israel, US Support the Sisi Regime Despite Its Undemocratic Move