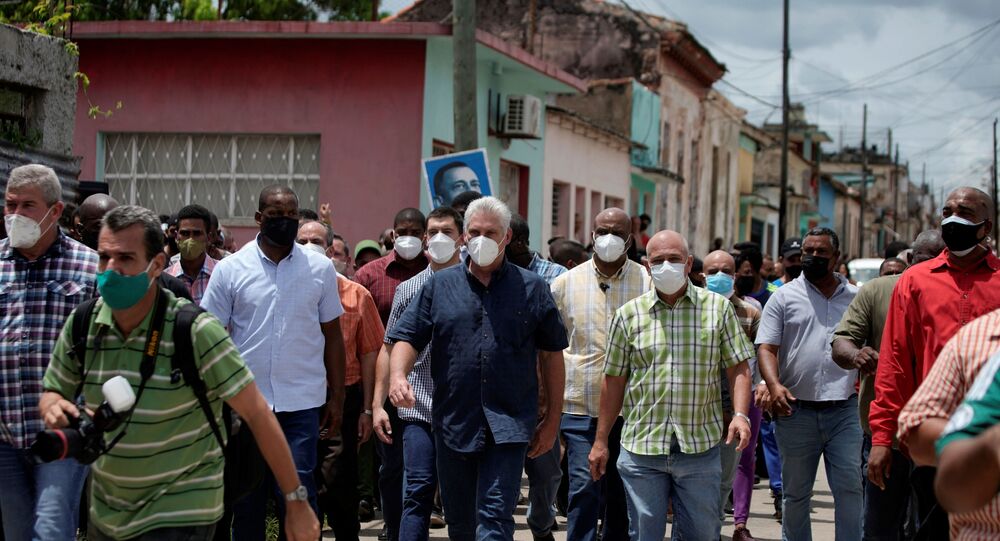 Protests broke out around Cuba last weekend, ostensibly over the ongoing COVID-19 pandemic and economic problems. Díaz-Canel met with protesters on Sunday, while large counter-demonstrations in support of his government assembled in various areas of the island.

Cuba's president said that US-based émigrés are attempting to direct a "soft coup" in the Caribbean island nation under the guise of protests.

Speaking on TeleSur's Round Table programme, Cuban President Miguel Díaz-Canel said so-called "conservative" elements in Cuba, demanding a reversal of the the 1959 revolution, were linked to descendants of members of the military dictatorship it overthrew.

The protesters are "people who respond to a foreign plan, who are irreconcilably opposed to the Cuban revolution, who don't think like Cubans, think under the design of the Empire," the president said.

Protests broke out around the country last weekend, ostensibly over the ongoing COVID-19 pandemic and economic problems. Díaz-Canel met protesters on Sunday, while large counter-demonstrations in support of his government assembled in various areas of the island..

The so-called anti-communist protests later degenerated into riots in some instances in which property was vandalised and cars were overturned, while one protester was killed and several police injured.

Cuba's bio-pharmacological industry has independently developed several coronavirus vaccines, including Soberana II and Abdala, which are being rolled out to the 11-million population.

US President Joe Biden lent vocal support to the unrest earlier this week, although his Cuban-born Homeland Security secretary, Alejandro Mayorkas, warned that any asylum seekers from the Caribbean island would be intercepted at sea and transported to other countries.

Biden was vice-president to US President Barack Obama during the latter's 2014-16 period of limited détente with Havana, which, while beginning the process of normalizing relations, failed to lift the US blockade of Cuba imposed since 1960.

"We have always been blockaded. We are a generation that has been born, raised, and lived under a blockade," the president told Telesur.

© REUTERS / OCTAVIO JONES
If You Don't Like It – Drop a Bomb on It? Miami Mayor Urges US to Strike Cuba
The July 26th guerrilla movement, led by Fidel Castro, took power on 1 January 1959, after marching into the capital of Havana the day before. President Fulgencio Batista, a former army sergeant who had led four military coups in 1933, 1934, 1935 and 1952, fled to the Dominican Republic that same day.

Other regime figures, along with business owners whose assets were nationalised after they attempted an economic lock-out, also left, with many settling in Miami, Florida. Some took part in the disastrous US-organised Bay of Pigs invasion attempt in 1961.

Batista's regime saw Cuba become a playground of drugs and prostitution for wealthy Americans, with the mafia in the US controlling many of the major hotels, casinos and resorts. Thousands of political opponents were executed or murdered under Bautista's rule.