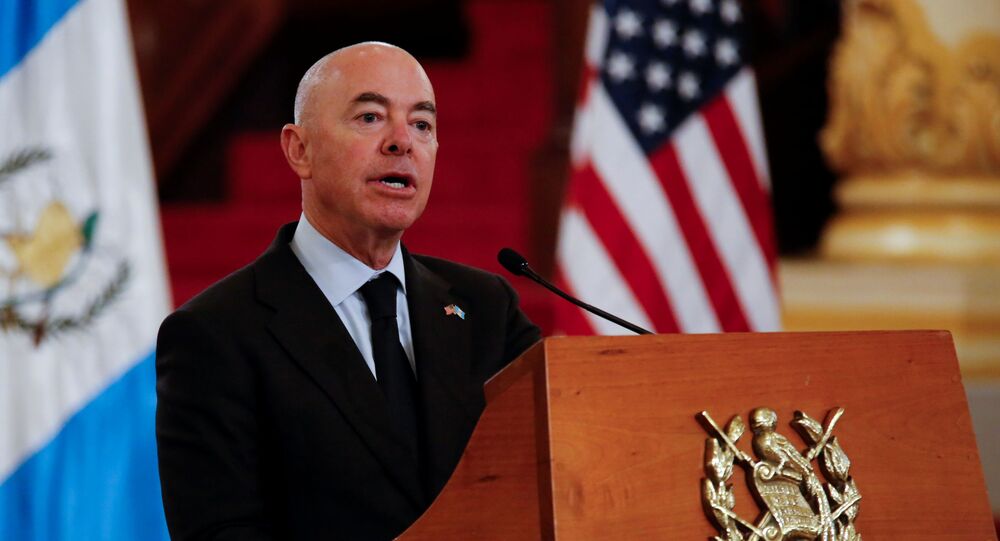 Alejandro Mayorkas was born in Cuba eleven months after the 1959 revolution led by late president Fidel Castro and the July 26th movement. His parents emigrated to the US a year later with him and his sister.

Asylum-seekers trying to reach the US from Cuba and Haiti by sea will be stopped and deported to third countries, US Homeland Security Secretary Alejandro Mayorkas said on Tuesday.

He warned Cuban anti-communist activists — backed by the White House — and those fleeing the chaos in Haiti following the assassination of president Jovenel Moise they were not welcome in the US.

"Allow me to be clear: if you take to the sea, you will not come to the United States," Mayorkas insisted.

The US has long enforced the so-called "wet-foot, dry-foot" policy towards Cuban immigrants deporting them if intercepted at sea but granting them asylum if they make it ashore.

"Any migrant intercepted at sea, regardless of their nationality, will not be permitted to enter the United States," Mayorkas warned. "This risk is not worth taking."

And the homeland security chief, himself a Cuban immigrant, said authorities would ship those claiming asylum to other countries to deal with — a controversial new trend in handling refugees and political dissidents.

"If individuals make, establish a well-founded fear of persecution or torture, they are referred to third countries for resettlement," Mayorkas said. "They will not enter the United States."

Small anti-government demonstrations broke out in Cuba over the weekend, prompting larger counter-marches in support of the government. President Miguel Diaz Canel spoke to protesters on the street on Sunday to hear their grievances, but on Monday he said they were organised by "a group of counter-revolutionary, mercenary people paid by the US government".

One man, identified as Diubis Laurencio Tejeda, was killed in a confrontation between police and a group of men armed with knives vandalising homes in the town of La Güinera on Monday. Several rioters and police were also injured. The governments Russia, Mexico, Nicaragua and Bolivia have all denounced destabilisation attempts in Cuba.

US President Joe Biden supported the protests in a statement on Monday.

"We stand with the Cuban people and their clarion call for freedom and relief from the tragic grip of the pandemic and from the decades of repression and economic suffering to which they have been subjected by Cuba's authoritarian regime," Biden said

Haitian President Moise became the latest in a long string country's leaders to be murdered or removed violently last week when a large group of Colombian mercenaries and Haitian-born US citizens forced their way into his home and shot him dead, also seriously injuring his wife Martine.

Haitian Elections Minister Mathias Pierre said days later that a request had been made to the US to deploy its troops to protect "infrastructure" amid unrest.

Mayorkas was born in Cuba eleven months after the 1959 revolution led by late president Fidel Castro and the July 26th movement. His parents emigrated to the US a year later with him and his sister — months after the US imposed the still-standing economic blockade on the Caribbean island nation but before the failed Washington-back Bay of Pigs invasion attempt.

Biden, whoa pointed Mayorkas in January, was vice-president to Barack Obama when Washington embarked on a programme of limited détente with Havana from 2014 to 2016. That included the release and return to Cuba of the last of the 'Miami Five', who were arrested in 1998 and later jailed after exposing anti-communist terrorist networks operating in Florida. Cuba released Washington double agent Rolando Sarraff Trujillo to the US at the same time.

Biden's government also reversed a policy of his predecessor Donald Trump that saw asylum claimants arriving from Mexico accommodated there until their hearings were due.

US Creates Unrest in Cuba and Haiti; Endless Wars Come Home to Roost

US Activists Walk 1,300 Miles to Washington to Demand End to Cuba Blockade