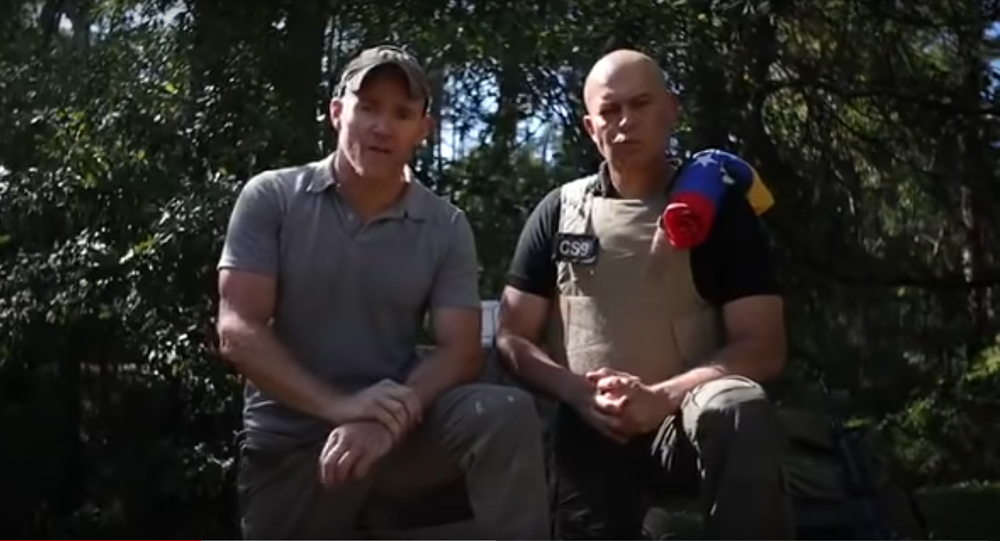 Venezuelan law enforcement has detained 66 persons in connection with the disastrous May 3-4 mercenary incursion of Venezuela, which was aimed at kidnapping President Nicolas Maduro and flying him to the United States for prosecution on ‘drug charges’. Among the detainees were two US nationals employed by Silvercorp USA, a private military company.

Jordan Goudreau, the ex-Green Beret founder of Silvercorp USA and the brains behind the failed mercenary attack on Venezuela earlier this month, received assistance in the plot from Franklin Duran, a Venezuelan businessman who once enjoyed close ties with Venezuela’s democratic socialist government, but who had an apparent falling out with Caracas, the Associated Press has reported, citing persons said to be familiar with the ties between the two men.

According to the report, Goudreau and his cohorts Airan Berry and Luke Denman, the fellow ex-Green Beret mercenaries who were arrested on May 4, took a chartered flight from Miami to Barranquilla, Colombia aboard a Cessna Citation II owned by Duran in mid-January.

An anonymous aviation industry executive confirmed that Duran was a frequent traveler to Barranquilla, making at least four flights to the city from Venezuela between November 2019 and January 2020, ostensibly to bring back ‘food and supplies’.

Goudreau did not comment on his alleged association with Duran.

Sputnik Mundo confirmed Thursday that Duran and seven other persons were served arrest warrants in connection with the Macuto Bay raid, also known as ‘Operation Gideon’, with charges including treason, rebellion and conspiracy with a foreign government, as well as terrorism, the illicit trafficking of weapons, and maintaining associations to the detriment of the Venezuelan state.

Duran and his brother were said to have been arrested Sunday. The specifics of the businessman’s alleged role in the plot have yet to be revealed.

The businessman was said to be close to retired army general Cliver Alcala, who fled to Colombia from Venezuela in 2018, and who was indicted on drug charges by US authorities in March and extradited to the United States. Yacsy Alvarez, an aide to Alcala, was also said to have been aboard the mid-January flight with Goudreau.

Duran was charged by the US Department of Justice of being an illegal foreign agent in late 2008, and spent several years in a Texas prison after being convicted. According to prosecutors, Duran was the brains behind an effort to cover up the source and destination of nearly $800,000 in undeclared cash sent from Venezuela to Argentina in 2007.

Last week, Venezuelan Prosecutor General Tarek William Saab announced that a total of 66 persons have now been detained in connection with Operation Gideon, with a total of ninety-nine arrest warrants issued, some of them yet to be served because the persons involved are located in Colombia and the United States. The Prosecutor General’s Office issued an arrest warrant for Goudreau two weeks ago. The mercenary is thought to be hiding out at his home in Florida.

The United States and Colombia denied any involvement in the botched May 3-4 operation, which saw as many as 60 heavily-armed mercenaries deployed into Venezuela using speedboats from Colombia. Most of the mercenaries were caught by security forces or local fisherman doubling as volunteer militia.

Goudreau claimed responsibility for the operation on May 4, and has since accused Venezuelan opposition leader and self-proclaimed ‘interim president’ Juan Guaido of signing a $213 million 'general services' contract with his company, but failing to pay up. Guaido reportedly sacked two senior aides following the botched raid.

Despite denying any US role in the invasion, US Secretary of State Mike Pompeo said it was Washington’s responsibility to bring Denman and Berry home.