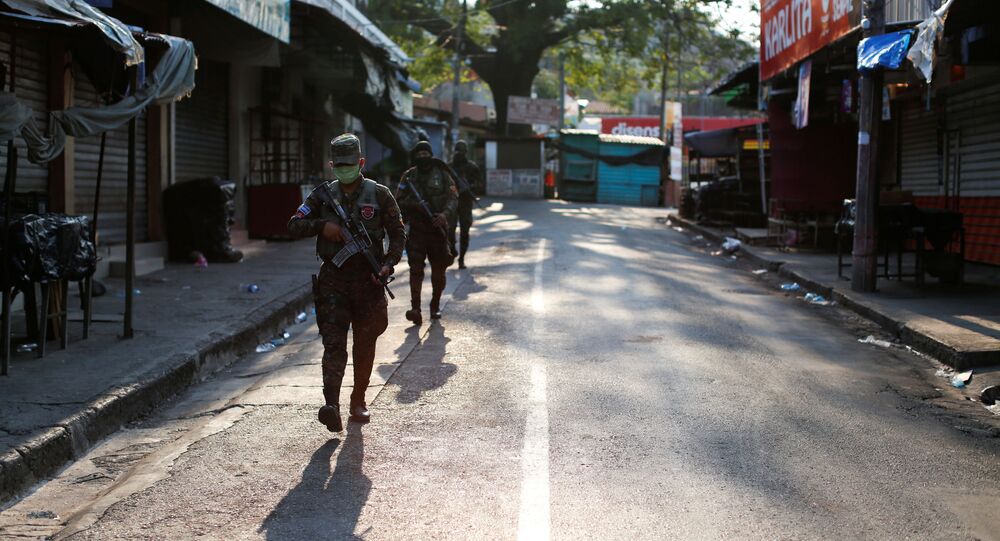 Salvadorans Push Back as President Bukele Attacks Human Rights, Claims Critics ‘On Side of Virus’

Human rights groups in and outside El Salvador have blasted President Nayib Bukele’s government for its draconian COVID-19 lockdown measures, accusing him of putting even the most basic civil liberties guaranteed by the 1992 Chapultepec Peace Accords at risk - and Washington is supporting it all.

El Salvador has just 261 cases of COVID-19 and eight deaths so far, but the government’s lockdown has gone far beyond what the situation requires, and at the same time has been neglectful of the problems created for people by that lockdown, according to many human rights groups.

The Committee in Solidarity with the People of El Salvador (CISPES), a grassroots solidarity group based in the large Salvadoran immigrant community in Washington, DC, published a damning report on Thursday blasting Bukele’s creeping authoritarianism and militarization of the country, and calling on San Salvador to rededicate money being used for the police toward the stripped-down health care budget.

“A lot of measures he’s been taking in response to the COVID-19 crisis are following in this pattern of really trying to impose his rule on the country and really challenging the role of the Supreme Court and the legislators in any kind of decision-making processes within the country,” CISPES Program Director Samantha Pineda told Sputnik on Friday.

Pineda confirmed that Bukele’s recent moves to balk at the Salvadoran constitution, such as ignoring a Supreme Court ruling invalidating the police practice of arresting people who violate the lockdown and placing them in quarantine for unknown amounts of time, were a continuation of the constitutional crisis that started in February.

Two months ago, in order to compel lawmakers to approve a $109 million loan funding further police militarization, Bukele sent armed soldiers into the legislative assembly, telling legislators that “it’s quite clear who has control of the situation.”

“His response to the crisis at the moment has been mostly to militarize the country even more than it already was, and really implementing terror in the community,” Pineda said. She noted that Bukele’s actions are “really undermining the 1992 Peace Accords,” which brought an end to 13 years of bloody civil war that killed at least 75,000 Salvadorans.

For Bukele, Human Rights Are ‘On the Side of the Virus’

In addition to ignoring the legislature and Supreme Court, Bukele has also attacked Human Rights Ombudsman José Apolonio Tobar, who leads a watchdog office created following the peace accords, retweeting a post from a fellow Salvadoran calling him “such an idiot” on Twitter and suggesting that he, along with other human rights organizations, are “only working to get more humans to die.”

Human Rights Watch noted in a report last week dozens of examples provided by the Ombudsman’s Office of abuses both in the streets of El Salvador as well as in the quarantine centers, including beatings, arbitrary arrests and withholding information about the details of people’s cases.

Bukele has used the same position as a bludgeon against journalists and even the legislature. Roberto Zapata, an LGBTI activist and general secretary of the human rights group AMATE El Salvador, told Sputnik Friday that the president’s actions were “discrediting our work by saying that we are ‘on the side of the virus’ and that we work for people to die. To my knowledge, this is the first time in our democracy era that a president takes this public stance with regards to human rights organizations.”

This, Zapata noted, has put “the integrity of human rights defenders at risk” as well, since their activities were not included in the list of permitted activities in Bukele’s executive decree. “Thus, there is no guarantee that activists will not be detained and sent to quarantine centers when mobilizing for humanitarian aid,” he said.

Likewise, when the legislative assembly threatened to override Bukele’s veto of a vital funding bill in support of medical workers on Thursday, Bukele posted a tweet heavily suggesting the assembly had been contaminated by COVID-19 and needed to be cleaned.

​Both Zapata and Pineda pointed out the issues created by Bukele siphoning money from the country’s health care budget toward the police and military, but noted the problem was still deeper. The International Monetary Fund has extended El Salvador a $389 million loan to help fight COVID-19, but it doesn’t compensate for more than a decade of infrastructural neglect.

“Although the current public health care system has many problems, it is true that during the two governments of the [left-wing umbrella party] FMLN there were important efforts made to improve infrastructure, accessibility and service quality,” Zapata said. “It is true, as well, that corruption may have prevented these efforts to have a better outcome.”

“However, I think the main factor that hinder[ed] a more profound health care reform was the lack of enough public resources due to a neoliberal economic model that the FMLN was unable to dismantle in 10 years. There are big economic groups that profit from this model and thus fight to preserve it. That’s why, during the last decade, the most important cities in the country saw private hospitals and clinics developing much faster and steadily to offer services for medical tourism and rich people, while many public hospitals and community clinics could not always provide all medicines to their patients,” Zapata noted.

© REUTERS / JOSE CABEZAS
People wait outside the National Center for Care and Administration of Subsidies (CENADE) to find out if they are eligible for the economic aid announced by El Salvador's President, Nayib Bukele, for people who cannot work due to the mandatory quarantine as the government undertakes steadily stricter measures to prevent a possible spread of the coronavirus disease (COVID-19), in San Salvador, El Salvador March 30, 2020.

“In this COVID-19 emergency, one of the things I hope people will come to understand is that humans are vulnerable and that in order to face public health challenges, we must invest a lot more in our public health care system,” Zapata told Sputnik. “This must be part of our agenda.”

Another problem exacerbated by the crisis has been violence against women and LGBTI people. In the report, CISPES notes the Bukele administration’s militarized approach has caused a spike in violence against these groups.

“The Feminist Collective for Local Development has noted that the National Civil Police hasn’t been responsive to complaints of gender violence, which is especially grave considering the Attorney General has confirmed four feminicides since the shelter-in-place order was issued,” CISPES wrote.

“In a recent Instagram Live interview with famed hip-hop artist Residente about the country’s response to COVID-19, Bukele made several homophobic and transphobic remarks. This prompted a denouncement from the LGBTI Federation of El Salvador, demanding the president fulfill his duty to ensure the equal rights of all Salvadorans irrespective of his own personal religious beliefs.”

Zapata noted that social media campaigns in support of vulnerable groups such as women, LGBTI people and people with disabilities have attempted to hold politicians and public institutions accountable for the exclusion of these groups, and Pineda noted that among the demands forwarded by CISPES has been the inclusion of the special needs of these communities in any and all programs instituted during the crisis.

However, as one writer in El Faro put it earlier this week, under Bukele, LGBTI rights are, paraphrasing Oscar Wilde, “the rights that dare not speak their name.”

‘Nayib Really Does Care What the US Thinks’

However, Pineda noted there was a role for Americans to play as well, by pressuring the Trump administration, which has encouraged the worst tendencies in Bukele toward a police state, to back off from that support and denounce the police actions in El Salvador.

“One of the things that we are also demanding is that all deportations from the US and Mexico to El Salvador stop,” Pineda told Sputnik. “El Salvador has continued to receive people who are being deported from the US, even though all other flights have been landed. So one thing we [in the US] can demand is making sure that the US is not deporting people, especially those who we know might have COVID, as well as calling US representatives, as well as the US embassy, to really denounce the authoritarian actions that the Bukele administration is engaging in.”

“Nayib really does care what the US thinks and does with regards to his policies, and it has been very supportive of his militaristic approach, so being able to have more congressional representatives denouncing him on Twitter does actually have an impact on how people view him in El Salvador and internationally,” Pineda said.

Not Obeying the Lockdown? Police Expose Violators to COVID-19 Patient as Punishment - Video