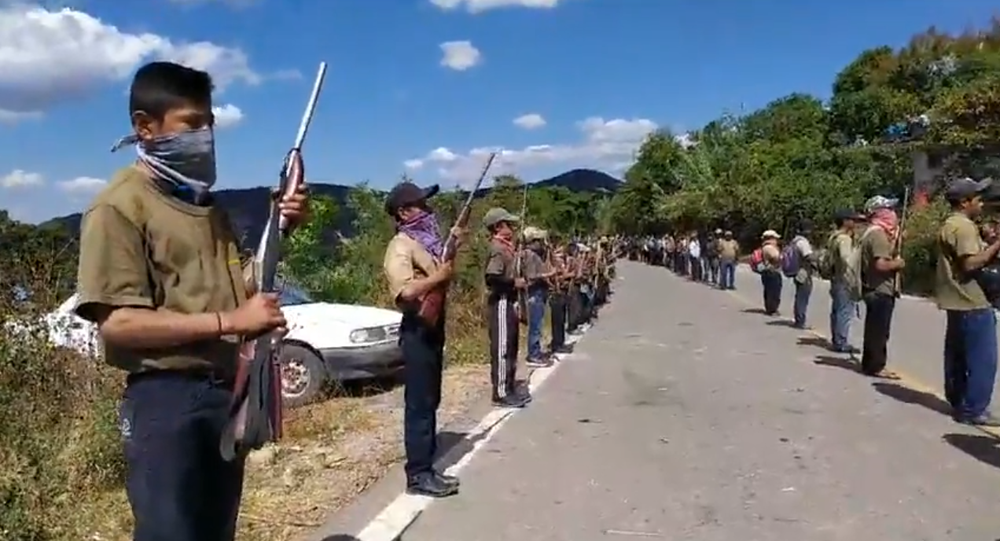 The Indigenous Council of Mexcalcingo, a small community in the township of Alcozacan in the Mexican state of Guerrero, has approved the arming and training of boys and teenagers aged 8 to 15, with a local community policing group teaching them to protect themselves, their families, and their communities from narco gangs, local media has reported.

Community police leader Bernardino Sanchez Luna told the media that the children’s help was necessary because the country’s National Guard has failed to do its job.

“Just in the last year, 28 of our men have been killed,” the official said, cited by local publication El Sur. The outlet has uploaded a video to Facebook showing boys standing at attention with rifles and shotguns of various calibres, changing positions following orders from an instructor.

Sanchez Luna said that the security situation has become so bad that some children are afraid to leave their towns to go to school. He added that children are often required to go to the fields to bring in grazing animals, where they may be confronted by criminals. “So it’s better for them to be able to protect themselves and the young ones,” he noted.

Only children 12 years old or older are allowed to use weapons. The rest are trained with sticks simulating rifles.

Earlier this month, ten indigenous musicians were shot dead and burned following an ambush by a local drug cartel. The incident, which took place on 17 January, followed a separate incident a year earlier in which 18 gang members and nearly two dozen local residents were killed during an attack on the neighbouring community of Chilapa, situated along Mexico’s so-called "Corridor of Death", through which much of the heroin bound for the US passes.

Authorities from Guerrero’s state government have condemned the killings, but criticised the training of children to defend the local communities, calling on community police to “respect the laws governing the human rights of children.”

Local communities have faced terror from drug gangs for over five years, with hundreds of victims and abductions reported, ranging from political leaders and a documentary filmmaker to random residents such as local craftsmen.

Communities in the state are demanding the immediate deployment of two units of the National Guard in the region, and the return of the remains of the dead musicians from the military hospitals and forensic centres where they are presently held. Residents handed a letter containing a list of security demands to President Andres Manuel Lopez Obrador in August, but say the federal government has yet to take any action.

The Mexican drug war is one of the most brutal but little talked about modern day conflicts, with nearly 400 Mexican troops, over 4,000 police, 12,500 cartel members, and tens of thousands of civilians killed in clashes since 2006. In early January, the Mexican government confirmed that over 60,000 of its citizens have gone missing in the conflict. The vast majority of the drugs, which enter Mexico from across Latin America, eventually make their way to the highly lucrative US market. US President Donald Trump made "building the wall" along the Mexican border one of the key planks of his platform in 2016, citing the drug problem, human trafficking, and illegal immigration among the reasons why the border fence was necessary.