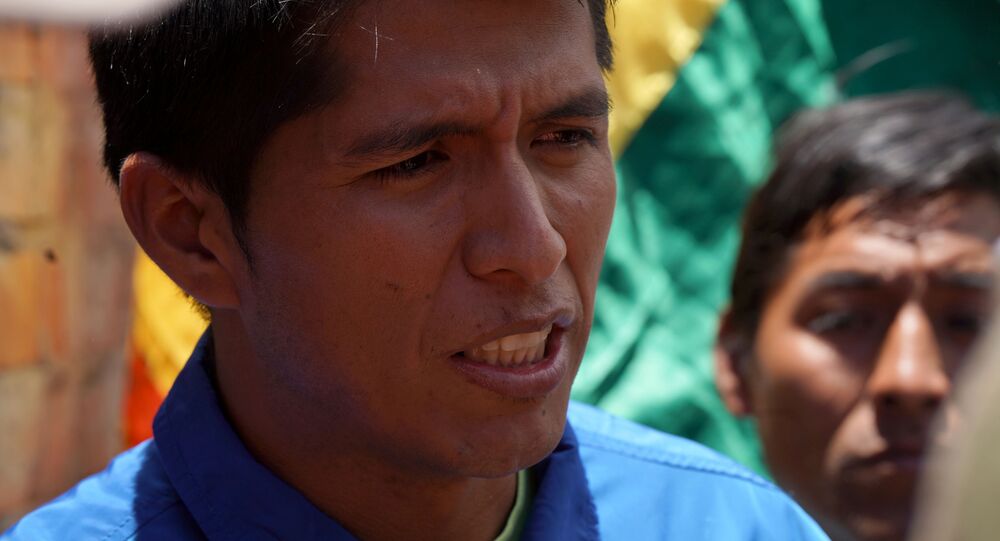 MONTEVIDEO (Sputnik) - Andronico Rodriguez, the vice president of six coca grower federations of Bolivia, the organization headed by ex-President Evo Morales, said he was ready to run in the presidential election as a candidate from Morales' left-wing Movement for Socialism (MAS) party.

"If national leadership bodies of the MAS party support me and president Evo approves this, I have no other choice [but to run for president]. But it is a very difficult thing and the responsibility is huge," Rodriguez said on Wednesday.

Local media suggest that Rodriguez is the most likely candidate to run in the presidential election from the MAS party.

Rodriguez became Morales' deputy in the coca producers association more than a year ago.

Rodriguez noted that though many considered him the next elected president, there was still no clarity around his candidacy.

"Regional meetings of MAS are underway … I saw international media often calling me a successor [to Morales] but a lot will depend on the approval of President Morales himself," Rodriguez emphasized.

On Tuesday, MAS said it would announce candidates for the presidential bid in five to eight days.

Rodriguez said that the possibility of becoming a presidential candidate came unexpected for him, adding that he was currently actively involved in supporting those detained, prosecuted and missing as a result of recent protests.

The politician also dismissed allegations of involvement in terrorism, threats, violence, attempting to undermine national security and sedition, which were voiced against him by right-wing lawmakers.

"They [the interim government] accuse us of sedition and terrorism. They voice absolutely false accusations of leading an armed movement and protecting drug trafficking against me. They resort to criminal prosecution without having any evidence," Rodriquez argued.

After Evo Morales resigned on 10 November and fled to Mexico following protests that started after his reelection for a fourth term, much of Bolivia’s senior management resigned as well. The ex-president's supporters subsequently engaged in rallies against the self-proclaimed Jeanine Anez government, which was followed to additional clashes with security officers. Morales described the ongoing crisis in his home country as a coup.