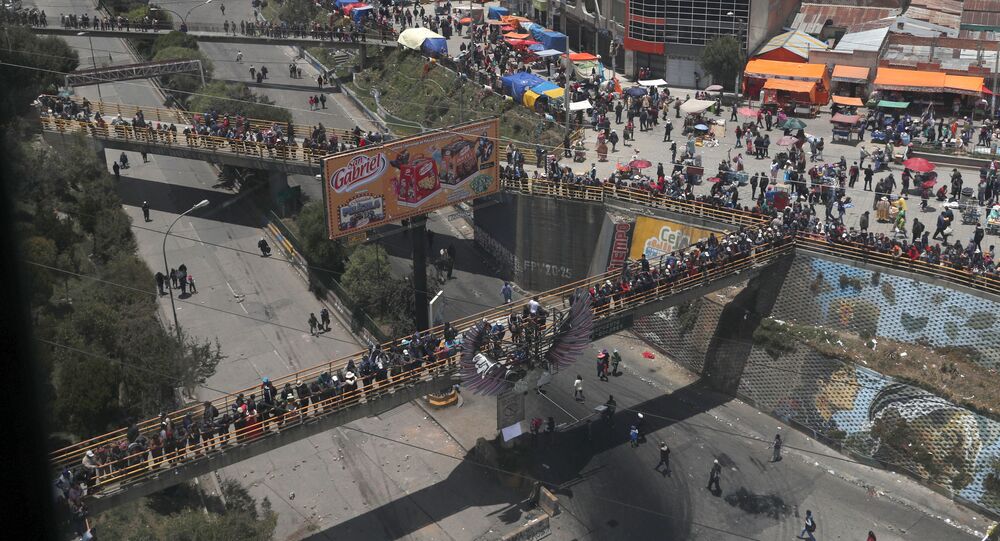 MEXICO CITY (Sputnik) – Over 30 staff members of regional election commissions in Bolivia have been detained as part of an investigation launched into the controversial 20 October elections, local media report.

A total of 34 people have been detained, including members of the Supreme Electoral Tribunal, Pagina Siete, a La Paz daily newspaper, said on Monday.

"In the case of the Supreme Electoral Tribunal we have three members in the city of La Paz", Bolivia’s Attorney General, Juan Lanchipa, said as quoted by the newspaper.

Mexican Foreign Minister Marcelo Ebrard announced on Monday that his country was granting political asylum to Morales. According to Peru’s foreign ministry, a Mexican government plane was on its way to pick up Morales as of Monday evening.

Second Vice Speaker of Bolivia’s Senate Jeanine Anez said on Monday that an urgent parliament meeting would take place on Tuesday in order to officially accept the resignation of Morales and appoint Anez interim president.

According to Anez, new elections in Bolivia must be held by 22 January 2020.

Morales stepped down on Sunday amid massive demonstrations against his victory in the October elections. The country’s armed forces and the police joined the calls for the president’s resignation. Several countries, including Argentina, Venezuela, Cuba, and Mexico described the events in Bolivia as a coup.

Last month, Morales won in the first round of presidential elections. The opposition, led by Carlos Mesa, accused him of electoral fraud and refused to recognize the results of the vote. The Organization of American States (OAS) published a preliminary report that found irregularities in the 20 October voting.