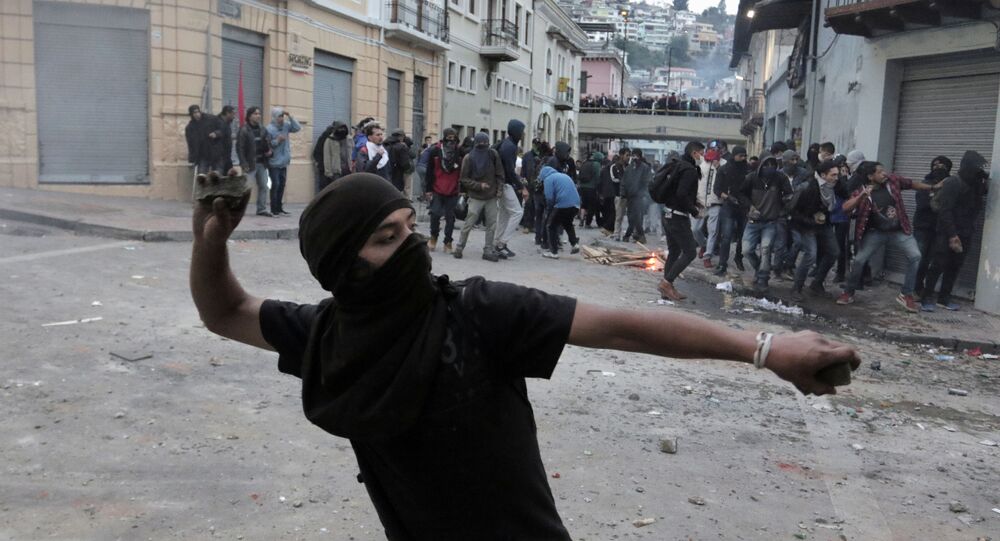 Violent rallies erupted in the South American country last week over austerity measures introduced by Ecuadorean President Lenin Moreno, who is reportedly seeking to ink an aid deal with the International Monetary Fund (INF) in a bid to overhaul the country's debt.

Unrest continued to rock Ecuador and its capital on Tuesday. Protesters, many carrying wooden shields, reportedly tried to break through a security cordon around Ecuador's Congress building in the capital city of Quito.

According to Reuters, a group of protesters chanting slogans and pumping fists in the air, briefly burst through security lines into the building before being removed by police.

This is the chaotic situation outside the National Assembly in Quito, Ecuador, right now pic.twitter.com/xKRvTsKDG5

The Ecuadoran parliament ceased operations on Tuesday, according to Homero Castanier, a lawmaker from the Creating Opportunities (CREO) party.

Protests over the end of fuel subsidies in Ecuador.

President forced to move the government from the capital Quito to the city of Guayaquil.pic.twitter.com/z5P6hiM2HW

"The National Assembly has suspended its activity; yesterday coordinators of various legislative bodies met with the assembly's president and vice-president and decided to suspend the activity as there were no guarantees allowing assemblymen and officials to visit the parliament's building", Castanier said.

​He noted that just a block away from the parliament protesters regularly gather at the Arbolito park. Many protesters tried to force their way into the assembly, albeit unsuccessfully, on Monday.

​"There is a possibility that the National Assembly will meet in another place, but the issue is that protests are ongoing in different districts which prevent us from going to an agreed meeting place", Castanier added.

Moreno, who declared a state of emergency over the nationwide protests last Thursday, has moved his government headquarters to the coastal city of Guayaquil.

The Andean nation has been rocked by protests after Moreno unveiled austerity measures that were thinly veiled as economic reforms - a part of his anticipated aid deal with the IMF.

An IMF deal will require the elimination of fuel subsidies, including a reduction of vacation days for public employees, changes to retirement benefits, and lower compensation for some contract workers.

Ecuador's economy is in debt for about $3.6 billion, due to the previous leadership. Moreno has been adamant about slashing debt to $1 billion by 2020.

Earlier, Ecuadorian authorities said the nation would leave the Organization of the Petroleum Exporting Countries in order to increase crude oil production and raise more cash.

The protests have, however, prompted the Ecuadorian state-run energy giant Petroamazonas to halt operations in three major oilfields. Protesters have organized a blockade in various regions, causing severe fuel shortages in six out of 24 provinces.