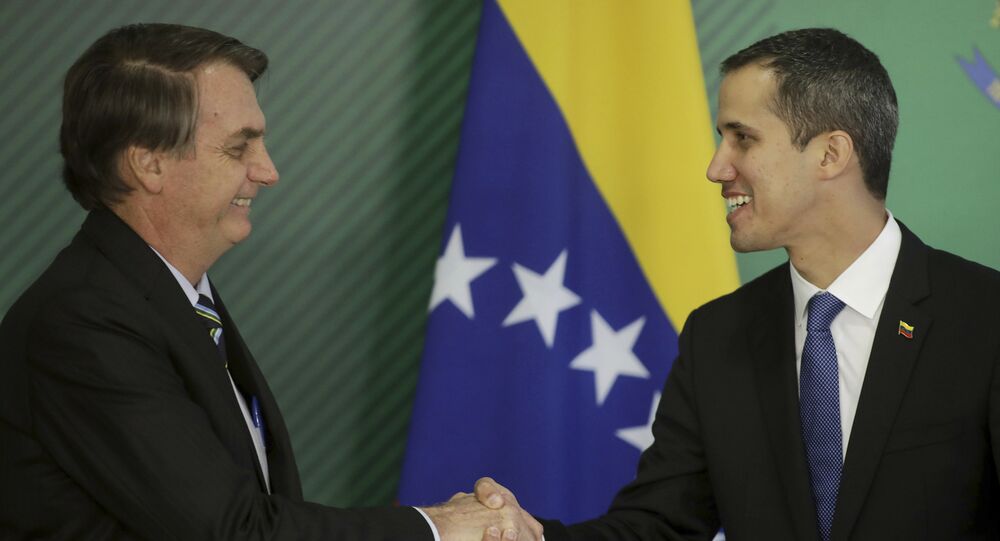 The Brazilian president will meet with his US counterpart amid rising tensions in neighbouring Venezuela.

During the visit, the Brazilian president will have a "private meeting" with US President Donald Trump, and hold meetings with Organisation of American States (OAS) Secretary General Luis Almagro.

© CC BY-SA 4.0 / Diego Vara/RBS / Ficheiro:259281-cdifoto-general-antonio-hamilton-martins-mourao-comando-militar-do-sul dj
Brazil Won't Allow US to Use Its Territory to Invade Venezuela - Reports
Brazil is heavily aligned with Trump on the Venezuela crisis, with Bolsonaro recognising opposition leader Juan Guaido as the country's interim president and vowing to "do everything possible to re-establish order, democracy, and freedom there". Earlier in February, Guaido visited Brazil seeking support in his fight against legitimately-elected President Nicolas Maduro.

"[Trump and Bolsonaro] will talk about the major role that the United States and Brazil are playing in the effort to provide humanitarian assistance to Venezuela", Sanders added.

Brazil has participated in the delivery of "humanitarian aid" to Venezuela by the US, allowing it to be stacked on the Brazilian-Venezuelan border. Earlier in February, a shipment of humanitarian aid was burned in Colombia at the hands of the anti-Maduro opposition. Later in March, The New York Times confirmed it in an expose.

Guaido, earlier this week, initiated a so-called Operation Freedom calling for nationwide mobilisation across Venezuela in an effort to oust Maduro, mulling the possibility of enabling foreign military intervention, according to an earlier AFP report.

Bolsonaro's arrival in Washington was met with protests by dozens of people accusing him of "murdering" Brazilian rights activist Marielle Franco over his connections to the suspects in Franco's case.

Thanks to anti-fascist friends old and new for joining the protest against Brazilian President Jair Bolsonaro today in front of the White House. DC United Against Hate stands strong against dictators, here and abroad, now and forever!… pic.twitter.com/htj35HZ64S

Protests against Brazil President Jair Bolsonaro outside the White House, ahead of his arrival in Washington later today. pic.twitter.com/w8zmuejWgF

The United States is Brazil's second-largest trading partner after China, according to AFP. Following his meeting with Almagro, Bolsonaro is reportedly scheduled to participate in various economic forums to promote business opportunities in Brazil.

Bolsonaro's visit will end Tuesday, after which the Brazilian leader will head to Chile and later in March to Israel.