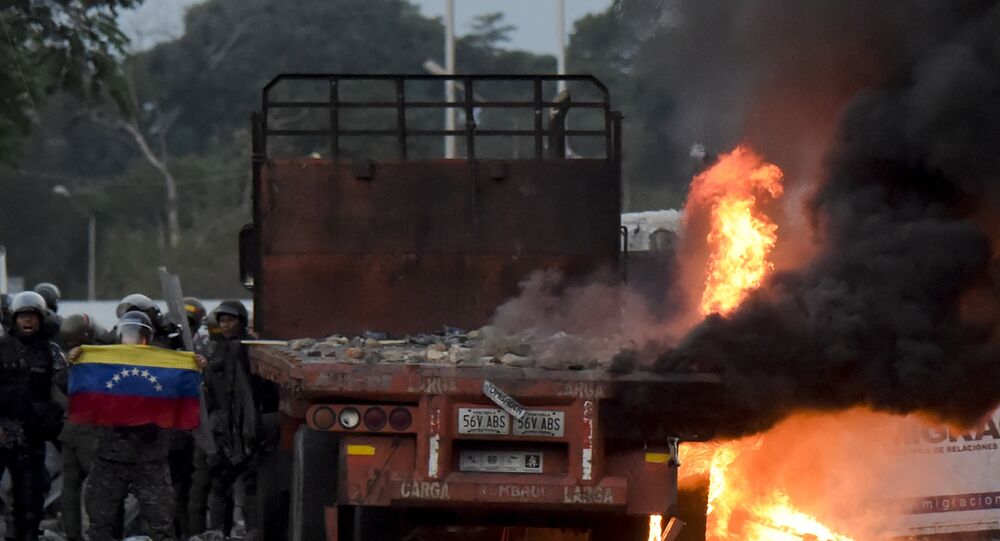 The Trump administration accused Nicolas Maduro’s government of torching a truck with humanitarian aid amid a civil plight in Venezuela in February. The State Department later released a video of the incident, and the narrative was instantly picked up by the MSM.

The New York Times, which has obtained unpublished footage and previously released clips, has exposed the inconsistency in reports on the burning trucks with humanitarian aid filmed on the Venezuela-Colombia border on 23 February.

While the majority of mainstream media advanced the official narrative that the convoy was set afire at President Nicolas Maduro’s order, the video presented by The New York Times, in fact, appeared to show an opposition protester hurling something akin to a Molotov cocktail at the convoy, which was most likely the trigger for the blaze.

© AP Photo / Fernando Vergara
US Doesn't Plan to Military Intervene Venezuela, But Works to Freeze Maduro’s Bank Accounts Internationally - Abrams
According to the newspaper, the same protester can be seen 20 minutes earlier in a different video, throwing an incendiary device at another truck, without torching it.

The NYT published an article and a detailed video two weeks after the incident, proving that this entire story was an elaborate lie, but the media outlet was not the first to debunk the US and Colombia’s claims that Maduro was behind the fire.

On 24 February, the day the story hit world headlines, several independent journalists pointed out that it was fake news.

@tictoc Here, exact moment of the launching molotov cocktails by the opposition groups before crossing the line of Venezuelan guards. It is evident as they fall on top of the trucks. pic.twitter.com/K1tOZrmS3f via @graffitiborrao

Another false flag at the border with Colombia. A "reporter" from @NTN24ve (opposition tv known for fake news) said a truck went on fire because the Venezuelan police launched tear gas. Let me know if you've seen tear gas burn a truck before#Venezuela #HandsOfVenezuela pic.twitter.com/P5uRWEBgCd

According to Venezuelan journalist @YepfriArguello molotovs launched by opposition supporters are the cause of the fire on the bridge Santander, on the Colombian side. #Venezuela #HandsOffVenezuela https://t.co/Azr4QWoms4

American journalist Max Blumenthal penned an article for site Grayzone, in which he noted that “the claim was absurd on its face”.

I did not see any Venezuelan government forces set fire to US aid trucks on the Colombian side of the border. And neither did you. Actually, the evidence so far is pointing in the other direction. https://t.co/AVBPYtFMiR

The fact that the NYT dispelled the myth pushed forward by the US government and a number of media outlets, has garnered much praise from those, who were originally advancing the initial version.

For instance, CNN, which claimed it had witnessed the incident firsthand: “a CNN team saw incendiary devices from police on the Venezuelan side of the border ignite the trucks”.

NYT: US officials used unverified claims about a burning aid truck to spin their side of the Venezuela crisis. This is a classic example of how misinformation spreads… from an unconfirmed rumor, to the Twitter feeds of top influencers, to the mass media. https://t.co/LXOmCiCixl

You have to be fucking joking with this tweet. It was CNN — the outlet where you work — that led the way in spreading this lie all over the world. CNN claimed it saw with its own eyes something that never happened. It ignored all the evidence presented weeks ago proving this lie: https://t.co/HzVSTRnlvx

On 23 February, a truck laden with US humanitarian aid was filmed burning on the Francisco de Paula Santander Bridge spanning the Venezuela-Colombia border, with Vice President Mike Pence tweeting that “the tyrant in Caracas danced as his henchmen burned food and medicine” heading to Venezuelans.

The tyrant in Caracas danced as his henchmen murdered civilians & burned food & medicine heading to Venezuelans. Saturday was tragic for the families of those killed & suffering Venezuelans. But it was just 1 more day in Venezuela’s journey from tyranny to freedom. Maduro must go pic.twitter.com/E1GQyvIbs8

Senator Marco Rubio accused President Nicolas Maduro of committing a “crime” by torching the convoy, while White House National Security Adviser John Bolton doubled down on his previous calls for Maduro’s ouster, claiming that the Venezuelan president had sent “masked thugs” to set the cargo alight.

Each of the trucks burned by Maduro carried 20 tons of food & medicine. This is a crime & if international law means anything he must pay a high price for this. #23FAyudaHumanitaria https://t.co/IrGzrOUX09

Masked thugs, civilians killed by live rounds, and the burning of trucks carrying badly-needed food and medicine. This has been Maduro’s response to peaceful efforts to help Venezuelans. Countries that still recognize Maduro should take note of what they are endorsing. pic.twitter.com/KlSebd2M5a

The incident took place the day the Venezuelan opposition, led by self-proclaimed interim President Juan Guaido and backed by the United States, attempted to ensure deliveries of humanitarian aid to the country from neighbouring Colombia.

Venezuelan President Nicolas Maduro voiced strong opposition to the convoy, deeming it a pretext for a US invasion of the South American country, and ordered the closure of the nation’s borders in a bid to halt the deliveries.

Maduro has stressed that the country is able to cope with its hardships and that US “concerns” over the so-called humanitarian crisis had been "fabricated by Washington over the last four years to justify intervening in our country".