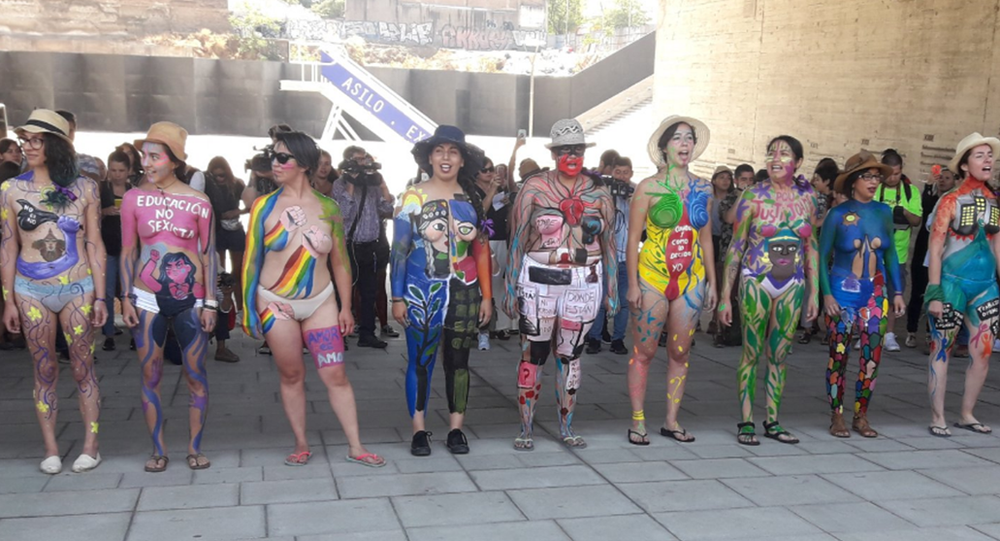 Parading through the city streets clad only in body paint to preserve their modesty, the female protesters also covered the walls of subway stations bearing masculine names with posters of well-known Chilean artists and the names of women who'd been the victims of gender violence.

A group of ten women shed their clothes and marched across the Chilean capital of Santiago wearing little more than body paint, in a bid to raise awareness ahead of the feminist strike scheduled to be held on 8 March, International Women’s Day.

​According to EFE news agency, the protesters also painted their bodies with slogans like "non-sexist education" and "I Decide When and How".

"Our female bodies are always being sexualised and treated like objects. The idea was to use our bodies as a canvas to call for support for the strike on 8 March, to declare that they are not for public use and we can use them how we like," protest organiser Javiera Salinas said.

© Photo : Good Morning Britain/twitter
Naked Truth: Anti-Brexit Feminist Academic Goes Nude on Air... Again
One of the protesters, Daniella Carvajo, said that this was her first time participating in such an event, and explained that she'd worked up the courage to overcome her embarrassment and take part in the march because “we are approaching the feminist strike and it is the first one ever held in Chile".

READ MORE: Nudity for the Win! Mexican Model Strips Naked for a Good Cause (PHOTOS)

The protesters also covered walls of subway stations bearing masculine names with posters of well-known Chilean artists and the names of women who had been victims of gender violence, the news agency adds.