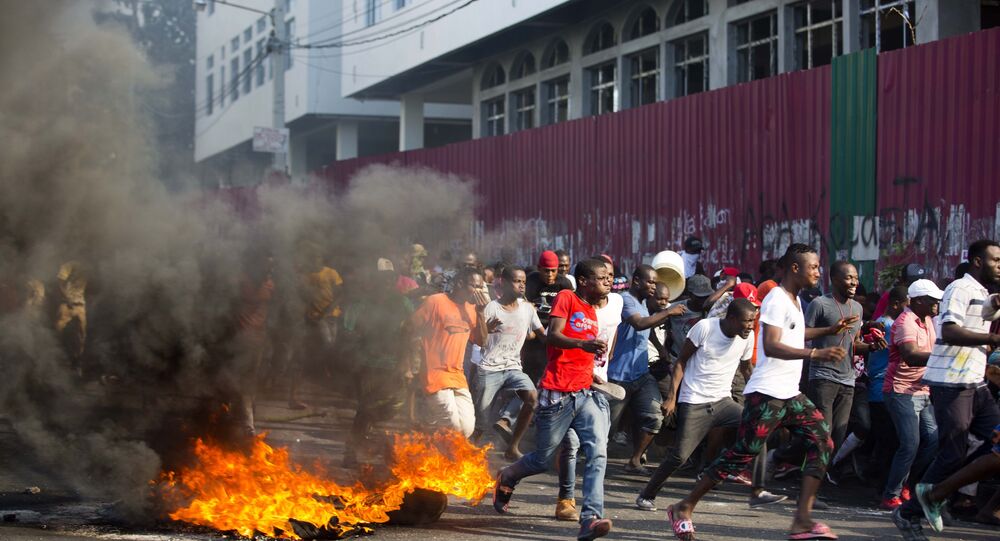 Anti-government protests have been sweeping across the Caribbean island nation for the past several days, with demonstrators referring to those currently in power there as Washington’s protégés.

Protesters in Haiti have railed against an alliance with the US, turning to Moscow, Caracas, and Beijing for help to resolve the crisis in the Caribbean country, Le Journals de Montreal reported.

So now they are burning the US flag in Haiti and inviting Russia to come in… Are we still going to talk about a 5B wall? Or can well all start to talk seriously now? The fight against the deep state is more important than you think… smoke and mirrors.https://t.co/V5JgDHGOqI

“We would like to declare a complete split-up with the US, we are fed up with the American occupation, we can’t tolerate it anymore”, the leader of the protest group called Bronson told journalists.

Check out this video from @PBS: PBS NewsHour, Violent protests in #Haiti may mean a humanitarian crisis and my update of the situation https://t.co/RNrpyftxNP

Streets are accusing wealthy elite & business owners of colluding with US Embassy to create a "humanitarian crisis" by withholding essential goods from sale as a form of collective punishment against widespread protests in #Haiti. pic.twitter.com/2eaPhpXCft

As media outlets have reported, demonstrators in Port-au-Prince, the republic’s capital, have declared the country’s President Jovenel Moise and the former head of state Michel Martelly “Washington’s puppets”. During the protests, Haitians burned the American flag chanting “Away with Americans! Long live Putin”. The police had to interfere and use tear gas to disperse the protests.

The country witnessed the first protests earlier this week, with demonstrators demanding that President Moise step down due to his inability to satisfy his citizens’ basic needs and provide for them economically.

In some parts of the island the protests have turned violent, leaving 7 people dead.