"More and more humanitarian aid is coming for Venezuela! We are pleased to confirm the arrival of three aircraft of the US Air Force carrying humanitarian aid", Guaido wrote on Twitter on 16 February.

The issue of humanitarian aid to Venezuela has become a matter of controversy in recent days amid Caracas’ concerns that foreign countries could use such deliveries as a cover to achieve political or military objectives. On 15 February, the US Defence Department told Sputnik that the US military would provide logistical support for the efforts to deliver humanitarian cargo for the crisis-torn country.

READ MORE: US Humanitarian Aid for Venezuela Arrives in Colombia 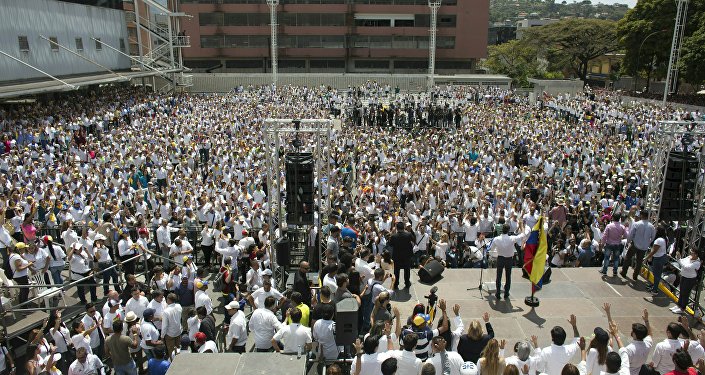 © AP Photo / Ariana Cubillos
US VP Pence Demands EU Recognize Guaido as Venezuela President
Guaido previously said that US humanitarian aid would be delivered to the country on 23 February. The Venezuelan government headed by President Nicolas Maduro so far has refused to accept aid that the United States has delivered to neighbouring Colombia, blasting it as a ploy to topple his government.

Tensions in Venezuela escalated on 23 January, when Guaido, who is the speaker of the opposition-run National Assembly, declared himself interim president, disputing Maduro's re-election. Guaido was almost immediately recognized by the United States and its allies. Russia, China, Mexico, among other nations, voiced support for Maduro, who, in turn, accused Washington of orchestrating a coup.