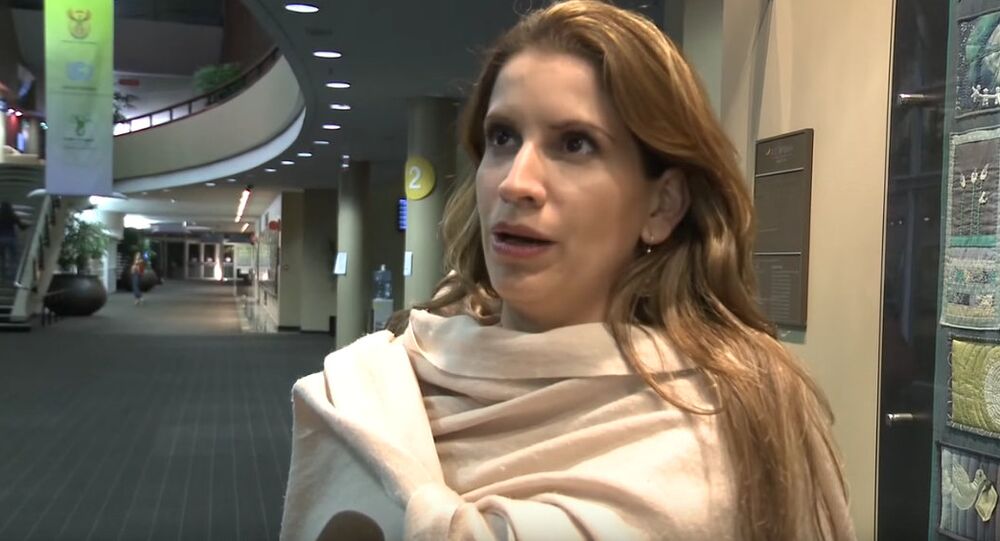 All through the current political crisis in Venezuela the US has made clear it’s support for the head of the opposition-led National Assembly, Juan Guaido, who declared himself the Latin American nation’s interim president.

In an exclusive interview with Claudia Salerno Caldera, the Venezuelan Ambassador to the EU, a Deutsche Welle reporter asked how long she imagined the embattled Venezuelan president, Nicolas Maduro, could hold on to his position.

"Six years I hope, because that is what the people voted for," Caldera quickly responded.

Several EU countries, including Germany, France, Spain and the UK, have joined the US in recognizing Guaido as Venezuela's interim president, while Russia, China, Mexico and several other nations continue to remain steadfastly by Maduro as the nation's legitimate president.

"A president […] doesn't hold on because foreign countries ask them, or like them or not," Caldera added, cited by Deutsche Welle.

Sebastian asked Caldera why Maduro should be allowed to stay in office despite reports that Venezuelan security forces have committed hundreds of killings of citizens under the veneer of fighting crime.

"If these are crimes that are being committed, it's not the president […] that is doing it'" she insisted, adding, "the penal responsibilities are direct and personal," according to Dw.com.

In September 2018, the UN Human Right Council (UNHRC) adopted a resolution on Venezuela amid concerns by governments around the world over the nation's ongoing humanitarian and financial crisis.

The UNHRC resolution states that the Venezuelan government must accept humanitarian assistance to grapple with a "scarcity of food and medicine," "the rise of malnutrition" and an "outbreak of diseases that had been previously eradicated or kept under control in South America."

According to Caldera, however, the current administration ruling Venezuela has not been condemned by the UNHRC.

"We presented our report last year and we came out with only 11 recommendations and all of them were fulfilled," she noted.

The UN High Commissioner for Human Rights, Michelle Bachelet, was invited by Maduro himself in November 2018 to visit Venezuela, Caldero observed.

"[That visit is] about to happen […] in these next few days," Caldera stated.

At the end of 2018, the Penal Forum, a prominent Venezuelan human rights organization providing legal assistance to those jailed by the Maduro administration without charges or trial, noted that there were over 230 political prisoners in the country at the end of 2018.

"The first thing that we need to solve with the [Penal Forum] and all the bodies that are claiming about […] political prisoners. is actually the concept of what it is: a political crime," the Caracas ambassador demurred.

"I don't think that many of the people that are right now being prosecuted by the public ministry are there because of their political views, but actually because of specific actions," Caldera claimed, adding that "they are not political prisoners in my country."

Caldera noted that the May 2018 voted that re-elected Maduro could have been completed with international observers but if "certain countries […] didn't want to participate as observers you cannot claim by then that the election is not valid."