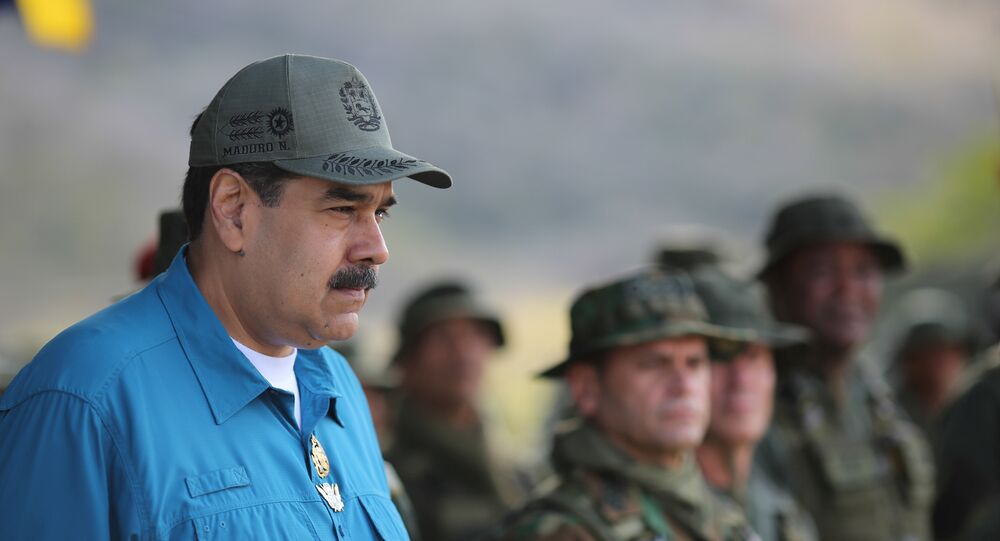 On Monday, Maduro warned against attempts "to weaken Venezuela" and fuel a civil war in the Latin American country. He also cautioned that Donald Trump will face far-reaching consequences if the US President pursues what Maduro described as a "dirty" imperialist conspiracy to oust him.

Venezuelan President Nicolas Maduro has pledged that the country's military will do its best to prevent a possible foreign invasion of Venezuela.

"No one, including aggressor soldiers, will enter Venezuela, I assure you. Don't we have the armed forces capable of protecting the country?" Maduro said during an address that was broadcast in his Twitter account on Tuesday.

Earlier, Maduro responded to US President Donald Trump's recent remarks that a US military intervention in Venezuela remains "an option", saying that "talking about the war in the 21st century is madness".

"It is insane to think that you can send troops to this land that will defend itself", Maduro emphasised, describing Trump's remarks as "illegal" and "criminal".

He accused Venezuela's "right-wing conspirators" of applauding Trump and asking him for a military invasion of their own homeland. Maduro said that the "oil and natural resources of our beloved Motherland" are the reason Trump would seek "to declare war against Venezuela".

He added that as of Wednesday, Venezuela will start collecting signatures against the US military intervention in the country.

"There are those who threaten Venezuela with intervention […] On Wednesday, we are launching a great national action to collect signatures across the country, which will then be submitted to the White House in order to reject these [intervention-related] threats," Maduro pointed out.

On Monday, he urged Trump "to stop" and warned the US President of grave consequences if he pursues what Maduro described as a "dirty" imperialist conspiracy to topple him.

He was echoed by Venezuelan Foreign Minister Jorge Arreaza, who tweeted late last week that Trump's remarks about a possible military option related to Venezuela confirm that the US President "leads the state coup" against the Latin American country.

Venezuelan Vice President Delcy Rodriguez also condemned Trump's statement and underscored that the people of Venezuela would not allow any foreign interference.

© REUTERS / Manaure Quintero
Journalist: US Would Be Willing to Move Ahead with Military Action in Venezuela
The political crisis in Venezuela became exacerbated on 23 January, when Juan Guaido, the speaker of the Venezuelan opposition-led National Assembly, proclaimed himself the country's interim president.

Earlier, the United States, most Latin American countries and some EU states supported Venezuelan opposition leader Juan Guaido's decision on 23 January to proclaim himself the country's interim president, a move that exacerbated the political crisis in the Latin American country.